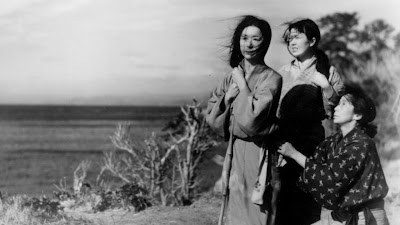 It’s a tough world, and we can’t always protect our children from bad things. Movies often include bad things happening to children as a part of the narrative. That makes sense, because it’s a part of life—of any life. I expect that as a matter of course, but as a father myself, it can sometimes be tough to watch little kids placed not in peril, but in terrible circumstances beyond their control. It is an awful thing to see a child destroyed mentally, emotionally, and spiritually. And this is what the first act of Sansho Dayu (Sansho the Baliff) is all about.

Our story concerns a brother and sister pair. Zushio (played as a boy by Masahiko Kato and as an adult by Yashiaki Hanayagi) and Anju (Keiko Enami as a little girl and Kyoko Kagawa in her late teens) are the children of a governor who, because he refused to pay taxes in preference to feeding his servants, is stripped of his title and exiled from his province.

His wife and the two kids follow along after spending six years with her brother. On the way, they hear a rumor that there are bandits and slavers along the route. They spend a night with an old priestess who turns out to be such a slaver. The mother is sold off in slavery to a distant place while the kids are sold as a pair and forced to work under the not-very-tender guidance of the titular character, Sansho (Eitaro Shindo). We learn quickly that Sansho is a cruel man, far more heartless than he needs to be, even for a literal slavedriver. The children are forced to work immediately, and learn their first night that the penalty for attempting to escape is being branded on the forehead. But they also learn a little mercy in the son of Sansho, Taro (Akitake Kono), who gives the children fake names and what little comfort he can. And thus the first act ends.

In the second act, 10 years have passed and the children have grown. Anju has retained her pure and innocent nature, and is kind when she can be. Zushio has given up on his father’s philosophy of kindness and mercy, and has more or less embraced the cruelty inherent in his own existence as a slave. While Anju remembers their past and dreams of reuniting with their parents, Zushio believes it is better to keep his head down, do anything he is told no matter how repugnant, and stay on Sansho’s good side. Anju’s hope is rekindled when a new slave begins singing a song that includes both of their names, a song that could only have been written by their mother.

Finally given a real opportunity to escape, Anju sacrifices herself both figuratively and literally for the betterment of Zushio, who finds himself not only freed, but quickly risen to a position of power. And this is where the third act plays out.

Ultimately, this film is about both the hope and resolve in the person of Anju as well as the redemption of Zushio, a redemption that begins in the second act. The pair are asked to cart a dying slave out to the wilderness to let her die. Zushio decides to escape, and Anju sacrifices herself. Freed temporarily with the chance to run away, Zushio takes the slave woman with him rather than leave her to die. In many ways, her fate is unimportant. By tying her to his own escape and freedom, he has begun remembering the lessons of his father.

That, more than anything is the story that Mizoguchi wants to tell here, and tell it he does. The film is plainly made and the story plainly told with very little frill and nothing unnecessary. It is a case of a film being all the better for being shot in beautifully vibrant black-and-white. Beautifully defined trees, their leaves standing out against a foggy backdrop, faces twisted in cruelty and emotional distress, the placid lake where Anju meets her end…these are not scenes that would be measurably enhanced by being in color. Mizoguchi is also a master of framing, with people perfectly situated between both natural and artificial frames throughout the film, drawing attention to precisely where he wants it. Like many other Japanese directors I have experienced, Mizoguchi’s work is a textbook example of basic filmmaking techniques.

There is a cyclical nature to the film that is both in keeping with a philosophy that embraces rebirth and very satisfying to the viewer. Zushio starts as the son of a noble, becomes a slave, and ends in a position of power. Taro, unable to deal with his father’s cruelty, protects the children as best he can and leaves. Ultimately, when Zushio flees, it is to a monastery where Taro is now in charge. People continually come back and meet again; only the size of the circle they make on the trip is different.

Sansho Dayu is a worthy film for the student, but equally worthwhile for someone who wants a movie that will provoke a little thought. If it suffers from anything, it suffers from the same illness that many Japanese period pieces do—there is a touch of the Kabuki here, and there’s a good deal of overacting. It doesn’t trouble me, but it will others.

Why to watch Sansho Dayu: A combination of tragedy and human virtue.
Why not to watch: Kabuki-style overacting.
Posted by SJHoneywell at 10:33 PM