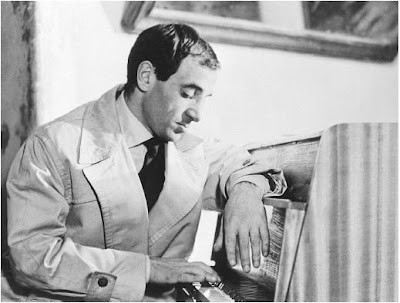 Film noir is an American film style, perhaps the only truly American film style in existence. This isn’t to say that Americans filmmakers don’t create innovative, interesting films in different genres, but film noir is a decidedly Yankee creation. It’s also the only accidently genre of film ever created—it wasn’t until after noirs fell out of fashion that they were determined to be their own thing. The French discovered film noir (hence the French name of the genre), so it comes as no surprise that some French directors might try to duplicate this style of film. Francois Truffaut’s Tirez Sur le Pianiste (Shoot the Piano Player) is one of the finer examples of a non-American noir in existence.

We start with Charlie Kohler (Charles Aznavour), a honky-tonk piano player in a dive bar run by Plyne (Serge Davri). Charlie is a pretty good player—good enough to be on the bar’s sign at least. We soon discover thanks to Plyne that one of the servers, Lena (Marie Dubois) has a bit of a crush on him. Also, almost immediately, everything goes to hell. A man named Chico (Albert Remy) rushes into the bar and begs Charlie for protection. It turns out that Chico is his older brother and Charlie is actually Edouard Saroyan, a noted concert pianist who is now hitting the ivories in the dive bar for some unknown reason.

And so Lena and Charlie/Eduoard (Edouard from here on out just for convenience) pick up a couple of new “friends” in the persons of Momo (Claude Mansard) and Ernest (Daniel Boulanger), the two thugs who were chasing Chico in the first place. The outwit the pair on the night in question, but are sort of kidnapped the next day. Some quick thinking by Lena gets them away from the duo and she leads Edouard back to her place where we discover that she has known his identity all along.

It’s here that we get a long flashback that tells us really what is going on with Edouard and why he plays the piano where he does. Edouard was married once, but as soon as he started having some success as a pianist, his marriage started to fall apart. His wife, Therese (Nicole Berger) and he grow apart, and it seems there is nothing he can do. And we learn that his success actually came from Therese giving herself in the Biblical sense to Edouard’s impresario, Lars (Claude Heymann), and thus she resents all of the success because of what it cost her. She confesses, he leaves, but returns immediately. It’s still too late—she has flung herself from their apartment. And thus, Edouard becomes Charlie and gives up his success as a sort of penance.

This takes us through the first half of the film. From here, we have a number of plots to be resolved. Edouard has to deal with his new-found romance with Lena; Clarisse (Michele Mercier), the prostitute across the hall; Momo and Ernest, Chico; and Fido (Richard Kanayan) his kid brother who lives with him. It’s quite a bit of plot to charge through in what amounts to about half an hour, and it’s compounded by the fact that Fido gets kidnapped and Plyne and Edouard get into a scuffle that ends with Plyne dead.

A great deal of the film takes place inside Edouard’s head, a sort of stream-of consciousness narration. Much of this deals not only with his past, but with what is going on around him as the film progresses. His first walk with Lena, for instance, is filled with his own self-doubt and a sort of constant mental anguish about his own desire for her and to not appear to forward with her. He is very much like a young boy in these moments, while in others, he speaks like a man almost at the end of his life, given over to despair and a little self-loathing.

This is a supremely strange film in many ways. While the overall tone of the film is bleak and despairing, as befits film noir, quite a bit of what happens is done strictly for comic effect. One of the two kidnappers, for instance, boasts to Fido about his scarf, saying something to the effect of “If I’m lying, may my mother keel over.” We’re quickly given a shot of an old woman suddenly stricken and dying. It’s obviously comedic and silly, and ultimately feels a bit out of place, as does much of the rest of the humor.

And so Tirez Sur la Pianiste is a film of multiple parts and multiple intents that never quite gels. It’s interesting for what it is, in part interesting because it is Truffaut early in his career when he was still figuring things out. It’s worth a watch for that reason if no other, but it’s a difficult film to recommend on its own merits.

Why to watch Tirez Sur le Pianiste: The French have an affinity for film noir, and this film is proof.
Why not to watch: It never really decides what sort of film it is.
Posted by SJHoneywell at 11:49 PM