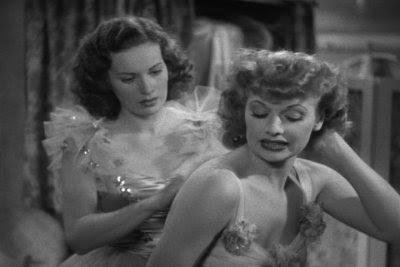 A great deal of my life for the past few years has dealt with the fact that my older daughter is extremely involved in the ballet. Gail dances a dozen or so hours every week, and I spend a good deal of my time sitting on a couch outside of her rehearsals and classes. So when a film has a ballet component (The Red Shoes, Black Swan), I take more of an interest. And seeing as how I bought a copy of Dance, Girl, Dance a couple of years ago, knowing that it would come up on this list eventually, well, here we are.

The sell on this film is the director, Dorothy Arzner. Arzner was the only mainstream female director in Hollywood’s Golden Age, a feat in and of itself. When you add to that the twin damning facts (at least of that day) that Arzner was also an ardent feminist and a lesbian, well, her sitting in a director’s chair is all the more amazing. In short, Arzner is a blow for women, albeit one that didn’t have a huge impact until much later. Women directors are still pretty scarce in the industry, but at least these days no one looks cross-eyed when they discover a woman in charge of a picture.

Anyway, Dance, Girl, Dance follows two dancers in particular. The first, all-American named Judy O’Brien (Maureen O’Hara) lives to dance, and wants nothing more than to be attached to a real ballet. One of her dance partners and roommates is “Bubbles,” (Lucille Ball) who is in many ways Judy’s opposite. Where Judy loves dance for itself and is serious about it, Bubbles likes men, money, and everything that goes with them, and sees dancing as a way to get what she wants.

Eventually, thanks to the fact that she has little in the way of shame, Bubbles goes full burlesque, adopts the new stage name of Tiger Lily White, and begins taking over on Broadway with a risqué musical act. She brings Judy in as a stooge; Judy’s job is to perform a ballet number and incite the crowd to both anger at her and greater desire to see Tiger Lily. It’s a thankless job, but the pay is good, and Judy sticks with it.

Of course, because this is essentially a musical from 1940, there have to be men in the picture. And there are two of them. Jimmy Harris (Louis Hayward), married but unhappily, has a thing for both girls. He meets both early in the film, ditching Judy to spend time with Bubbles. And then later, he returns into their lives, ditching Bubbles for Judy. Also important in all of this is Steve Adams (Ralph Bellamy), who is in charge of an important ballet company. He pursues Judy as well, both from a romantic and dance angle. On several occasions, Judy shoots herself in the foot with him, either from a lack of confidence or a desire to spend more time with Jimmy.

What is interesting here is that we’re given flawed characters. Perhaps only Steve Adams lacks a significant flaw, other than he’s a bit dreamy-eyed throughout. Judy continually deals with the fact that she has no confidence in herself. Witnessing a rehearsal of a ballet company, she simply walks away, deciding that she doesn’t have the talent to make it. In fact, at this point she almost gives up dance entirely. Bubbles doesn’t lack in confidence, but she does seem to lack a bit of humanity. She helps her friends out on the sly at one point, but otherwise acts entirely in her own self-interest and damn the cost. She’s quite obviously a gold digger, and more importantly for the narrative of this film, she’s ridiculously competitive with anything else wearing a skirt. Her job offer of stooge to Judy is part because she feels sorry for Judy, but mostly because it allows her to constantly ridicule a dancer who is, ultimately, a better dancer than she is. And then there’s Jimmy, who wants only a good time and someone else to pay for it.

For that, this movie is pretty interesting. Unfortunately, that’s also the only reason this film is pretty interesting. It has the pedigree of a film that should be giving its audience something real, or significant, or different. And it doesn’t. Ultimately, this film is no different than anything else that came out of the musical films of the era. It’s pretty much the same damn thing despite the possibility for something more. Ultimately, the women in the film can’t amount to anything without a guy there for them. And that’s just sort of depressing from a lesbian feminist, regardless of the era. The speech at the end doesn’t really make up for it, especially when it’s followed by an on-stage catfight.

Why to watch Dance, Girl, Dance: A feminist vision from before World War II.
Why not to watch: Despite its feminist background, it’s not much different from other films of the period.
Posted by SJHoneywell at 4:58 PM