I love film noir. I know that the purist says that noir is a style and not a genre, but I don’t really care. I consider it to essentially be its own genre of film. Noirs have their own feel, their own pace, their own specific pattern that makes the irresistible to me. A mediocre noir is better than a lot of other films, and a great noir will make me happy for days. So it’s a genuine pleasure to find a couple that measure up. 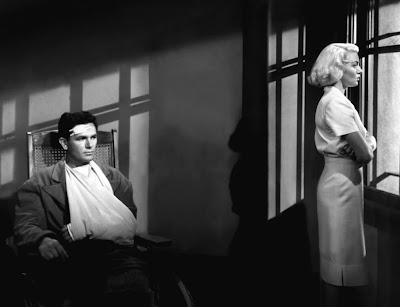 I’d heard of The Postman Always Rings Twice mostly because I remember when it was remade. I haven’t seen that remake, but I remember a lot of buzz around it because of how steamy it was supposed to be. And the name is pretty memorable. The name, for me, creates a lot of possible mental pictures, a sense of foreboding and possible dread, of a crime committed and remaining unpunished. Interestingly enough, the title is actually a real stretch, and fits only because of a speech at the end of the film. Having seen the original, I can probably think of a half a dozen better titles. What initially got me interested turned out to be really the weakest link of the film.

Anyway, we have a drifter named Frank Chambers (John Garfield), who shows up at a roadside diner thanks to a ride from the man who happens to be the local district attorney (Leon Ames). As it turns out, the diner is looking for help, signified by the sign “Man wanted” out front, a sign that is a nice bit of foreshadowing. The diner is run by Nick (Cecil Kellaway), a plump, jovial guy who likes a bit of a drink now and then. What Frank didn’t see coming is that nice guy Nick has a bombshell of a wife in Cora (Lana Turner).

Naturally enough, Frank and Cora fall for each other and fall hard. They plan on running away together, but, in typical femme fatale fashion, Cora has second thoughts. She doesn’t want to be a nobody, drifting from place to place. She wants the eatery. She wants to turn it into something real, and she wants Frank with her. To do that, they need to get rid of Nick. So they hatch a plan.

And it goes south. The plan is to electrocute Nick in the bathtub and have the both of them with an alibi, but a cat fouls up the works by stepping on an open wire and frying the electricity first. Nick is injured, but Frank convinces Cora that if he dies, they’re sunk, so his life is saved. Plan two goes into effect—the pair plan to get Nick sloppy drunk and then fake a car accident. This time, it works. Unfortunately, the D.A. was onto them the whole time, and books them both for murder, then convinces Frank to swear out a complaint against Cora since he was badly injured in the wreck.

Enter the lawyer, Arthur Keats (Hume Cronyn). Smarmy and crooked, but smart enough to stay ahead of the law, he manages to get the pair off, but also leaves them in the unfortunate position of being prime targets for blackmail. Add in the fact that Frank gets itchy feet and an itchy zipper, and now the two are shackled together and unable to trust each other or anyone else, leading to the inevitable film noir climax.

Bluntly, this film is great. Really, really great. The performances are magnificent throughout, with not a single one missing a single beat. Kellaway plays Nick as a man satisfied with his own decisions, and not quite caring enough if anyone else agrees with what he does. Cora is cold and deceitful except for those moments when she is inflamed with desire. And Frank is a little too clever and a little too lazy for his own good. It is Garfield who truly carries the film despite Turner’s top billing. But much could also be said for the nuanced and evil performance of Hume Cronyn as the just-crooked-enough lawyer.

What I really like about this film, though, is the way the characters work. Often in a film noir, the main characters are career criminals, people who are looking for one last score or one big heist to see them through. Here, the characters are merely people caught up by their circumstances. None of them, certainly not Frank or Cora, are blameless or truly good people. But, at the same time, none of them are truly evil or terrible. They’re merely affected and afflicted by their own whims, and unable to act against their own desires.

This is a smart film, and one that I’m happy to have seen. This is one I will want to watch again. 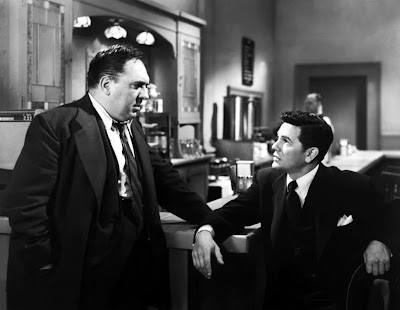 By pure coincidence, the other film noir I got through interlibrary loan last week also happens to star John Garfield. And in this one, his character couldn’t be more different. In this film, he plays Joe Morse, a crooked lawyer working for the syndicates. He and his boss, Ben Tucker (Roy Roberts) have hatched an interesting scheme. Throughout their city, people play the numbers, which is illegal. Their plan is to convince the city to make the numbers a legal lottery.

At the same time, they’ve rigged things to destroy the independent, criminal “banks” that run the numbers. How? Well, as it turns out, on the 4th of July, everyone plays “776” as a sort of patriotic good luck charm. So Morse and Tucker have arranged for the number to hit, which will bankrupt all of the banks. Unfortunately for Morse, his brother Leo (Thomas Gomez) runs a small bank, and will be destroyed when he is bankrupted.

The two of them have a difficult relationship. Leo sacrificed everything for his younger brother, and Joe hasn’t done much for Leo to benefit. And so in a bid to make amends, Joe arranges for Leo to be in charge of the new bank that will take over when Ben Tucker moves in and controls all of the numbers action in the city. He does this by pleading, coercion, and by forcing the police to raid his brother’s bank. He also makes time with Leo’s former secretary, Doris (Beatrice Pearson) and avoids advances from Ben Tucker’s exotic wife Edna (Marie Windsor).

As I said earlier, Garfield’s character couldn’t be more different in this film. Where in Postman he fought against his baser urges unsuccessfully, in this film, he jumps into his vices with both feet, trumpeting that he is a bad man not subject to fits of morality or conscience. His voiceover narration, in fact, makes it plain that we wants to win over Doris not by pretending to be an innocent adrift in a vicious world, but as a willing shark snapping at smaller prey. And he does this with a predatory joy that is truly wonderful to watch.

Of course, since this if film noir, everything goes to hell in a handbasket by the end. The guilty, and some of the innocent, are punished by the time the final scene plays out. That’s expected—that’s the entire point of a film noir, after all. Seeing the bad guys get their comeuppance, even those we have come to like or sympathize with—is where the catharsis in these films comes in. Crime, in film noir, never pays, regardless of the reason or the intent.

It is very much to my detriment that I had not really heard of John Garfield before tonight. I’ll put this plainly—the man could act. Two reasons have kept him from being rightfully regarded as one of the true giants of the days of classic Hollywood. First, his career was significantly affected by HUAC despite his not being a communist. Second, tragically, he died at 39.

As it turns out, these are Garfield’s only two films on The List. But this is a guy who I will seek out from this point forward. You should do the same. You won’t be disappointed.

Why to watch The Postman Always Rings Twice: It may be the purest noir ever made.
Why not to watch: That title is quite a stretch.

Why to watch Force of Evil: John Garfield is the man.
Why not to watch: It’s too short.
Posted by SJHoneywell at 11:28 PM