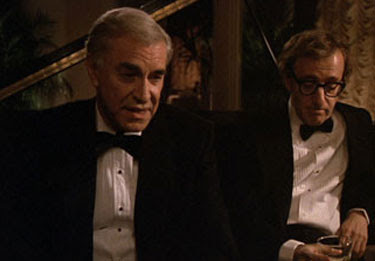 Oh, Woody Allen! Is there any subject your various neuroses won’t cover? Crimes and Misdemeanors is a film with essentially two stories that are mostly tangential, with a couple of characters that intersect here and there. Except for the very end, there is a relatively minor character who appears in both stories sort of as a link between the two, although he’s not really a major player in either one.

The first, and sort of main plot, features an ophthalmologist named Judah Rosenthal (Martin Landau). Rosenthal is a hell of a doctor and has a string of honors behind his name. He has a wife (Claire Bloom) and a daughter (Stephanie Roth Haberle) and a deep, dark secret. The secret is that he also has been having an affair with a flight attendant named Dolores Paley (Angelica Huston) for the last two years, and things are starting to get difficult. Dolores wants him, and wants him out of his marriage. She’s threatening to go to his wife, and she’s also threatening to out him on his financial improprieties.

In the other story, a documentary filmmaker named Cliff Stern (Woody Allen) exists in a loveless marriage to Wendy (Joanna Gleason). Wendy’s brother Lester (Alan Alda) is a big shot television producer who makes sitcoms for the masses. He also makes Cliff exceedingly jealous. There is a documentary film being made on Lester, and Cliff is tapped to direct it. Also working on the film is Halley Reed (Mia Farrow). Cliff forms an instant attraction to her, and is nonplussed to discover that Lester has a thing for her as well.

The two stories collide in the person of Ben (Sam Waterston), who is the brother of Lester and Wendy and a patient of Dr. Rosenthal. Ben, a rabbi, is rather rapidly losing his eyesight and will probably be completely blind in a couple of months.

In essence, the two stories also meet in this connection over infidelity. In Judah’s case, the infidelity is real and has been going on for some time. In Cliff’s case, the infidelity is desired and mostly in his mind. He feels this connection and it’s evident that there is a little bit of a connection from Halley as well, but it’s primarily from him. Judah, on the other hand, wants out and is trapped in this double life by the evidently increasing neurotic behavior and desperation of Dolores.

Things come to a head in Judah’s story when he confides in his gangster brother, Jack (Jerry Orbach). Jack suggests that perhaps Dolores can be convinced, strong armed, or simply eliminated, and eventually, Judah breaks down and agrees. When the deed is done, he finds it necessary to go to her apartment and retrieve some incriminating evidence, and is confronted with the body, which sends him into a serious existential crisis.

For Cliff, things come to a head differently, but in an oddly similar fashion. In addition to the piece on Lester, he’s been working on another biopic about a philosopher who espouses a basic idea of what love is and what it means for us. As he continues to work on it, the philosopher kills himself by jumping out a window, essentially invalidating his philosophy, his life, and Cliff’s dream project.

Crimes and Misdemeanors is interesting because it has all of the makings of a black comedy, but in general, there’s not a lot of comedy here. There are moments of it certainly, but too much of the film spends its time around Judah and Cliff in their own private dark midnights of the soul for the film to truly be comedic. This is not specifically a problem—it’s merely an observation on the way the film plays and the reality of the content.

There are a few moments that are difficult to watch, not because of violence or even really content, but simply because of the reality of the situation. Again, this is not a criticism of the film, but a mere observation.

I love the cast. It contains a number of actors who instantly place me in New York. Allen himself is primary among these, of course, but so too are Jerry Orbach and Sam Waterston, both of whom I love seeing on screen. I also love Angelica Huston in most of her roles, and here she is suitably crazy and passionate all at the same time. Were he not already famous, this would be a break-out role for Alan Alda. Alda, it seems, had to work hard to overcome the Hawkeye Pierce role, and he does it here. Lester is a smarmy bastard, and Alda plays him as if from memory of seeing too many wealthy, egomaniacal producers wander through his life. He’s picked bits and pieces from many, I would guess, and created an amalgam that is mildly pitiable and easy to dislike.

Despite the lack of comedic content here, I enjoyed this film pretty well. The theme is an interesting one, as is the resolution at the end. At its heart, the film asks the question of whether or not a man can truly live happily with the memory and guilt of his past sins. For one of our two leading schmucks, the answer is affirmative, while the other seems to disagree with every fiber of his being. I’ll leave who is who out here—no need to spoil—but if you know the work of Woody Allen, you know the answer to this already.

Why to watch Crimes and Misdemeanors: Woody Allen exploring the ideas of infidelity with Mia Farrow. If you think about that for a second, it’s almost too meta to handle.
Why not to watch: Jerry Orbach and Sam Waterston aren’t used nearly enough.
Posted by SJHoneywell at 11:34 PM