A New Definition of "Disarming" 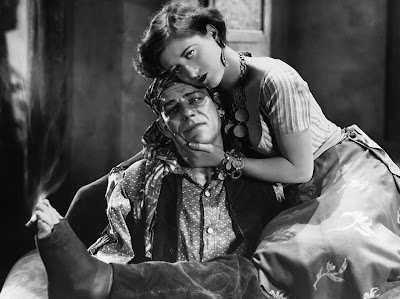 I’m finding it difficult to explain The Unknown. Oh, it’s not going to be a difficult film to summarize; I’m having a difficult time explaining its existence. If nothing else, it’s evidence that the more things change, the more they stay the same. The Unknown contains the sort of plot that seems beyond a 1927 audience, and yet here is the film, proof that such a bizarre and disturbing idea can find an audience in what we tend to regularly assume is a more Puritanical past.

The action takes place in a circus where one of the headline attractions is Alonzo the Armless (Lon Chaney). Despite having no arms, Alonzo is a trick shooter and knife thrower, performing these tasks with his feet. His target when it comes to trick shooting and knife throwing is Nanon (Joan Crawford), who is also the daughter of the circus’s owner. Alonzo is madly in love with Nanon, as is Malabar (Norman Kerry), the circus’s strongman. Nanon seems to return some of Malabar’s affections, but she has her own phobia to deal with. She has been grabbed and pawed by so many men in her past that she has become terrified of men’s arms and hands, making Alonzo sort of the perfect man for her.

Except for the fact that Alonzo has a secret to keep. He actually still has his arms. In fact, he’s got a little extra in that department; on his left hand, he has a double thumb. He hides his arms because as the circus travels around the country, he performs robberies and burglaries, not worrying about leaving fingerprints. Only his assistant Cojo (John George) knows that Alonzo still has his arms. Things change during a confrontation with Antonio Zanzi (Nick De Ruiz), Nanon’s father and the man who runs the circus. He warns Alonzo away from his daughter, and discovers the man’s arms. Desperate, Alonzo kills him. Nanon sees the crime, but not the face of the killer. She does, however, see his double thumb.

Cojo alerts Alonzo to his reality rather than his fantasy of life with Nanon. Should he become intimate with the girl, she will discover his arms. More importantly, she’ll discover his double thumb. Alonzo, desperate, makes a terrible decision, and this is where things really start to get disturbing. He contacts a doctor over whom he has blackmail evidence. In exchange for his continued silence, Alonzo has his arms amputated. This destroys any evidence of his crimes, eliminates any connection between him and Zanzi’s murder, and also makes him truly Nanon’s ideal man. But during his convalescence, Nanon has overcome her fear and has fallen for the brawny arms of Malabar. This sets up the terrible and inevitable conclusion.

Put simply, Lon Chaney is the reason to see this film and the reason this film exists. Malabar’s role could have been easily handled by any broad-chested man with a winning smile. Nanon’s role needed only a pretty face and a good figure, both of which Joan Crawford possessed in 1927. It’s Chaney who makes this film work, though. Initially, it is through his incredible ability at costuming, hiding his arms and acting like a man without them (although many of the tricks were evidently performed by a true double amputee hiding on the set). As the film progresses, though, Chaney’s expressive face carries the rest of the film. There is really no need for actual dialogue to understand the incredible torment of Alonzo, particularly at the moment he realizes that he has cut off his arms for nothing.

If anything really disappoints in this film, it is the length. I expected a film of about an hour’s length; The Unknown actually clocks in at fewer than 50 minutes. It’s incredibly compact, and while it does not feel like something is missing, it feels fairly insubstantial in some way. There should be more here. I’d like to see some of the crimes that Alonzo commits—these could be demonstrated by showing them to us rather than simply having Cojo tell us about the crimes. The strangeness of the story could very easily handle another half an hour or more. Alonzo is an interesting enough character that I’d like more insight into his character.

Lon Chaney has a reputation of playing monsters—Quasimodo, Erik the Phantom, and others. Alonzo the Armless fits into this pattern, too. Because of this, Chaney is thought of more as a horror actor out for thrills and chills. The Unknown as well as many of his other films serves as very real evidence that the man could truly act, create characters that are both terrible and vulnerable, and make an audience feel his character’s pain.

Why to watch The Unknown: Lon Chaney. You need no other reason.
Why not to watch: Just as it starts to get interesting, it ends.
Posted by SJHoneywell at 8:45 PM