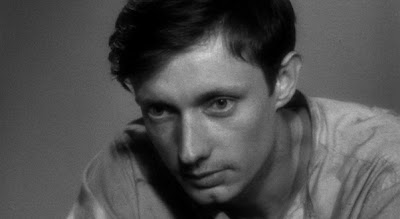 It’s not immediately apparent in Robert Bresson’s Un Condamne a Mort S’est Echappe ou le Vent Souffle ou il Veut (A Man Escaped, literally something like The Condemned has Escaped, or The Wind Blows Where it Will) what the hell is going on. It takes a few minutes to fully understand the situation we are in. We see a man in a car. He’s handcuffed, and he regularly seems to be thinking about trying the door handle. Eventually, he does try the handle and gets away, but is immediately recaptured. Strangely, for a film that appears to be in French based on the titles and the director, the dialogue we hear is in German. Soon, the car arrives at its destination, the man is beaten, and he is thrown into a cell.

We soon discover that the man in question is named Fontaine (Francois Leterrier, who bears a disturbing similarity to D.J. Qualls) and that he has been captured by the Nazis for being a member of the French Resistance. He spends some time in a cell on the second floor of the building, and has some contact with a few men in the courtyard below. He’s able to send a little mail to the outside world, and the men in the courtyard get him a safety pin, which he uses to undo his handcuffs. Fontaine’s only thought is of escape, and the handcuffs are the first step. As it turns out, though, the step is moot; he is eventually moved to the top floor and his handcuffs are taken away anyway.

We learn other things as well. Executions are conducted at the prison regularly, which we learn by the spurts of machinegun fire. Fontaine learns to communicate with other prisoners by tapping on the walls of his cell, something he tries immediately upon being brought to his new cell. He also learns that the door of his new cell is made from weak wood, and with a spoon he keeps from a meal, he starts to loosen the boards to work on his possible escape.

A Man Escaped (I’m sticking with the English title so I don’t have to type the eternal French one again) is a strange combination of bleak despair and continued, eternal hope. While certainly there have been more terrible prisons in cinematic and human history, the prison in which Fontaine spends his days is a vast nothing. While not specifically filled with torture or horror, it is one of the bleakest places in cinematic history. We watch him in this place filled with nothingness painstakingly scraping along the boards of his door, never losing hope. At the very least, he never loses focus. He is aware at all times that he may be discovered in his attempt to escape, and will be punished or killed for trying. And yet he continues, compelled to attempt to get away from the terrible place. It adds to the overall feel of genuine evil of the place that Fontaine spends the entire film in the same shirt, stained with his own blood from the beating at the start of the film.

As much as this film is about the indomitable will of Fontaine and his desire for freedom, it is also very much about trust and the nature of trust. Always on the verge of being caught should a guard find him working on his door, he is forced to depend on his neighbors to assist him in maintaining his quiet work and keeping it secret from his captors. Eventually, he is able to pull out three boards from his door and walk around outside his cell, then get back inside and repaire the look of the door without detection. However, he had never thought beyond that moment of getting out of the cell, and finds himself unsure of where to go next. And so he must trust his other prisoners. Eventually, his ability to trust is put to the true test, when he is given a cellmate who was a member of the German Army.

Fontaine’s relationships with several of the other prisoners are central to the story he goes through and the story being told. Next to him on the top floor is a man named Blanchet (Maurice Beerblock), who attempts to get Fontaine to stop his attempts at escape so that there will be no reprisals against the other inmates. Fontaine attempts to get him to care again. Across the hall is Orsini (Jacques Ertaud), who is also trying to escape. The two men form a sort of bond of mutual suffering, and help each other when they can. Finally, and most importantly, is Francois Jost (Charles le Clainche, who has a rather astounding pompadour), a member of the German Army. Trust, nearly impossible to come by, becomes essential for even Fontaine’s hope of survival.

All of this is relevant to what the film is about, but none of this speaks to the reason the film is important or worth watching. After all, it would be relatively easy to make a bad film about a guy trying to escape from a Nazi prison, and the film that Bresson has made is gripping from open to close. Much of this is because of Bresson’s style. We are frequently in close proximity with Fontaine, frequently seeing only his hands and arms as he works. Watching him dig at his door, unroll wire from his bed frame, and tear sheets and clothing into strips to make rope sounds like it would be terribly dull, but the reality of Fontaine’s situation lends a fascination to these proceedings. This is made all the more real when Fontaine is given a death sentence for his complicity in a planned Resistance bombing.

A Man Escaped is a fascinating study in solitude, trust, and the desire for freedom. I haven’t seen all of Bresson by far, but I’m not sure I’ll find one better than this.

Why to watch Un Condamne a Mort S’est Echappe ou le Vent Souffle ou il Veut: Intense prison drama.
Why not to watch: It's hard to get past the whole D.J. Qualls thing.
Posted by SJHoneywell at 10:46 PM