Films often are about the people we want to be or wish we were. Frequently it seems to me that films are about a sort of wish fulfillment. The people in films are beautiful, and their characters live the sort of lives we dreamed we would as children. They have meaningful and important dream jobs, carry with them the fate of the world often enough, and exist in a world of either opulence or of at least quiet luxury. “Poor kids” in a lot of John Hughes films still live in big houses and have their own cars—they just aren’t the nicest houses and the cars aren’t new. That’s how you can tell they are poor in the film world. 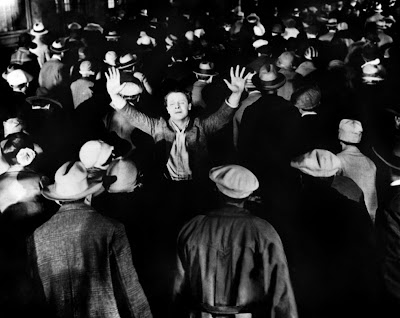 This is why Italian neo-realism was such a shock. It’s also what makes King Vidor’s The Crowd such a noteworthy film for its time. It certainly starts out like the film we expect, with the main character overcoming terrible odds and adversity to become the great success he always knew in his heart he deserved to be. And yet it doesn’t really play out like that when we come right down to it. Instead, it is a sort of precursor to a film like It’s a Wonderful Life in tone if not in plot.

John (James Murray) is born on the 4th of July and has no reason to disbelieve his father when he is told that he is destined for great things. Despite the loss of his father at a young age, John is convinced that he is something and someone special and needs only a slim opportunity to make the best of everything. At 21 he moves to New York and starts on the bottom rung of a large company, one man in a sea of faceless office workers and identical desks. But he still has hope and ambition.

He eventually meets the equally ubiquitously named Mary (Eleanor Boardman) and the two are soon married. John isn’t much of a hit with the in-laws, particularly with his low-rent job and high-rent speech about his rosy future. A couple of kids follow, as do bills, marital strife, bickering, and a terrible tragedy that nearly crushes the couple under its weight. John eventually sinks into a terrible depression, quits a series of jobs, and becomes essentially a nothing, not capable of doing much of anything. Naturally for the time the film ends on an uplift, but throughout, the film depicts the slow spiral of John from his idealistic youth to the reality of the world around him.

And that, more or less, is the entire point of the film. John and Mary are not exceptional in any way. Oh, John can juggle a bit and play the ukulele, and Mary can sew a dress, but in the grand scheme of the world, there’s nothing about them that is particularly noteworthy or special. All of this makes John’s die-hard belief in himself and his own abilities that much more tragic and painful to see play out on the screen. In fact, the only real thing that John has going for him is this unwavering belief in himself that slowly erodes as the film wears on.

It’s an interesting theme for a film, particularly for 1928. Interesting in that John’s woes of unemployment and long lines of people seeking work seem to presage the stock market collapse of the following year. But also interesting in the sense that John is not by any stretch a movie hero. He’s a bum, He’s a man who spends much of his time dreaming about something better but who is evidently unable to work up the courage or the effort to do much of anything about it. Because of this, he is a tragic figure, lost, and lost because of his own shortcomings and faults.

Also critical here (and why the film was named as it was) is the faceless and impersonal nature of the crowded city itself. John can do nothing to separate himself from that crowd and can do nothing to rise above it. His complete lack of any exceptional quality turns him into just another faceless drone at his job and just another face in the crowd in the rest of his life. Ultimately, like most of us in the world, John’s fate is to be just a man struggling with his own existence rather than mastering the fates as he had always believed himself capable.

The Crowd suffers from precisely what most other silent dramas do. It is very melodramatic in terms of the acting style, and this is frequently off-putting. Additionally, there’s a reason that most films contain truly heroic characters. It’s easier to get behind and root for someone who is in some way exceptional than it is to cheer and hope for a many who seems at each turn to be unable to help himself at all.

Despite this, The Crowd is very effective at showing the life of this simple, average man an in showing how simple it is for that life to quickly become a tragedy.

Why to watch The Crowd: It’s tailor-made for the 99%.
Why not to watch: It’s still laden with melodramatic overacting, like most silent films.
Posted by SJHoneywell at 11:27 PM