I Have No Words 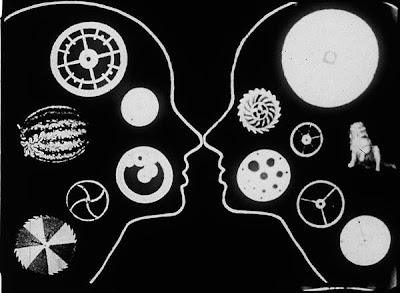 It’s not often that I find myself so completely flummoxed by a film that I have nothing to say, but such is the case with Harry Smith’s Heaven and Earth Magic, alternatively titled No. 12. When I say that I can make no sense of this film, it seems like I’m just being lazy. I understand that. To give you an idea of what I mean, though, I’m going to use Smith’s own words to define his film. I found this on Wikipedia. I know Wikipedia is not always reliable, but damn me if this description doesn’t at least somewhat cover what I watched.

According to Smith, this film’s story is this: “The first part depicts the heroine’s toothache consequent to the loss of a very valuable watermelon, her dentistry and transportation to heaven. Next follows an elaborate exposition of the heavenly land, in terms of Israel and Montreal. The second part depicts the return to Earth from being eaten by Max Muller on the day Edward VII dedicated the Great Sewer of London.” Got that? Yeah, me neither.

When I was a kid, I was a huge Monty Python fan. I still am, really. I love Python stuff. I have all of the shows on DVD and own most of the films. I remember watching the show every Sunday night on public television (WTTW, channel 11, Chicago). Every Sunday, it was Python at 10:00 followed by Dave Allen at Large, which I claimed to like despite the fact that much of it was too adult for me to really understand. Anyway, when I’d watch Python, my mother would comment on how stupid she thought the Terry Gilliam cartoons were. I secretly loved the cartoons—they were some of my favorite things from the show.

I promise this isn’t a tangent. Heaven and Earth Magic is essentially a 66-minute-long Gilliam cartoon. Actually, Gilliam’s animations on Python come after Smith’s film, which means that Gilliam may well have gotten inspired by Smith’s work. What we have here are cut-out photographs that sometimes animate. Most of the animation is simplistic, often two-step animation. Little cut-out photographic people walk in herky-jerky motions across the screen. They give each other fish. A cow appears and is hit with a mallet, turning into a map of the various cuts. The woman of Smith’s alleged plot merges with her dental chair.

Yeah, it’s pretty damn avant garde. This impression is in no way changed by the bizarre soundtrack, which is essentially sound effects rather than any sort of music. Parts of the soundtrack might well be considered music—that is if you call a ceaselessly ringing bell accompanied by the sound of several clocks and a steam whistle to be music.

Look, I’ll make this really simple. I like Terry Gilliam’s animations. I think they are often funny. But when they go full-on avant garde with intentionally obscure meanings and last for more than an hour, I have enough of them quickly. By 20 minutes in , I was very much ready for this thing to be done. At the 40 minute mark, I was wondering how much more I could take.

Ultimately, avant garde cinema just makes my head hurt. I don’t gain anything in my life or in terms of valid meaning for my existence when I watch a skeleton and a machine essentially play jai alai with a cooing baby that turns into a watermelon. It is beyond me to see how I could have been enriched by such an experience, even on the best of days. Heaven and Earth Magic is not a challenging film; it is a punishing one.

I’m not going to pretend to make up a meaning here, folks. I have not a clue what any of this is about or is supposed to mean. I’m certain there is meaning here; I just seem incapable of fathoming what it is. And I have a genuine desire to soak my head in Epsom salts. Further, I’d suggest that you could show me a clip from this film from virtually any point in its running time, and I wouldn’t know which part it came from.

Why to watch Heaven and Earth Magic: It will put skid marks on your brain.
Why not to watch: Because at 66 minutes, it’s 33 times too long.
Posted by SJHoneywell at 11:43 PM