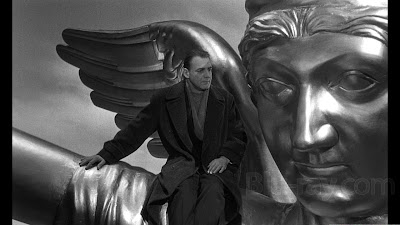 Religiously, as I have said once or twice before in the context of this blog, I consider myself an agnostic who, at the very least, has essentially decided that Humanity’s attempts at connecting with the infinite are misguided at best. Despite this, or perhaps because of it, I still find particular expressions of religious thought and belief to be very moving and powerful. This is essentially what I expected with my first Wim Wenders film, Der Himmel Uber Berlin (Wings of Desire). What I got was a lot more.

This is a film of staggering power and truly moving beauty. Having said that, it would surprise me not at all if many people find this film difficult or almost unwatchable. I think it requires a particular mindset to truly become immersed in what this film is. The story is most unusual both in what it is and how it is told.

A pair of angels named Damiel (Bruno Ganz) and Cassiel (Otto Sander) are charged with wandering Berlin and preserve and remember what they see. In essence, they are a sort of impartial recording of the people in and passing through Berlin, not judging or punishing or rewarding, but merely observing. We learn as the film continues that the pair have been here since before there was a Berlin, when it was nothing but grassland. They have been here through the city’s founding, through wars and progress, always observing.

This, observing and listening to the thoughts of the masses of Berlin, makes up a great deal of the film. A few things become evident as we follow the angels—Damiel primarily but not exclusively. We learn that the angels are frequently moved to moments of exultation, for instance. It becomes evident that children are able to see the angels. And the angels evidently have their favorites. Cassiel, for instance, seems to spend a lot of time following an old poet named Homer (Curt Bois), comforting him when he can. Damiel soon becomes enamored of a French trapeze artist named Marion (Solveig Dommartin). Additionally, Peter Falk as himself is in Berlin to work on a film. Damiel spends a great deal of time on the film set observing, and perhaps remembering, since the film concerns World War II.

It’s interesting that Falk, while credited as “Der Filmstar” is really playing himself; he makes mention of his time spent as Columbo, for instance. And so, in a sort of meta moment, it’s not really Peter Falk as himself, but Peter Falk playing Peter Falk, and the difference is all the difference. The distinction is important, because within the context of the film, we discover critically important information about Falk.

The vast majority of the film is shot in gorgeous black-and-white, which represents the point of view of the angels. In the rare moments in which neither Damiel nor Cassiel are present, the film is in color. The distinction is important. Why do the angels see in black-and-white? Because the angels are unable to experience the world, and this is where the real dramatic tension of the film comes from. The angels do not truly understand what it means to experience…anything. They do not truly want or fear or suffer or experience joy. This is true except that there is truly one desire—the desire to experience.

It manifests itself primarily in Damiel, who wants to feel and touch and eat and have pain and know what hot and cold really mean. It becomes an obsession for him when he meets the trapeze artist, and slowly, over the course of the film, the desire becomes something that is inevitable for him. It takes us the first two acts of the film to get there, but eventually, Damiel decides to truly exist and experience the world. And more than this, he intends to find his trapeze artist and cure both her loneliness and his own.

I said it at the start of this, but I will say it again—this is a film of surpassing beauty. It very easily could have become a film of darkness and depression, a film of terrible unspoken desire. Instead, it is a film that revels in existence, a film that expresses nothing so much as the pure joy of being. It is uplifting, and not merely in an emotional sense, but in a spiritual one. It is a movie that, with the right mindset going in, can fill its audience with the pure joy of a weekend morning spent overlong in bed, of a hot bath after a long day, of that first long pull of caffeine before a long day starts. It is films like this that make me come back to magical realism as a genre, because it is films like this one that sometimes make me believe in anything beyond the world we live in. If such spirituality can exist in film, then perhaps there truly is a human spirit after all.

Needless to say, I loved this film. I don’t know if you do or will, but I heartily recommend you give it a try.

Why to watch Der Himmel Uber Berlin: Because even the least spiritual of us is still a spiritual being.
Why not to watch: You don't believe the previous sentence.
Posted by SJHoneywell at 10:08 PM