Not Much of a Honeymoon

It feels like it’s been awhile since I’ve found a film that is new to me that I’ve really been captivated by. Oh, there have been a couple in the past week or so that I’ve liked, and I certainly remember Der Himmel uber Berlin very fondly, but that one feels like it was months ago instead of just a couple of weeks. I’m not sure what it is. I don’t know if I’ve been choosing poorly or if I’m somehow starting to burn out a little bit trying to punch through 25 movies or so every month, plus films for podcasting. Burnout is possible, of course, and sometimes it does feel a bit like this is work. But I don’t think it’s that. I think my pushing myself to find more obscure films is paying a particular dividend—many of these films are obscure for a reason. 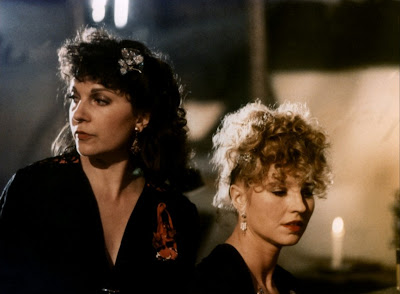 I suppose if I really needed to recharge myself, I’d pick one of the multiple dozens of films on the list that I’ve already seen and watch it again, something mindless and entertaining and fun. I wouldn’t, in that situation, select a dense German film that I’d never seen before. I picked up a copy of Die Ehe der Maria Braun (The Marriage of Maria Braun) when my local library started trying to slough off their stock of films on VHS. When you can fill up a bag for a dollar, it’s hard to resist, even if it’s a film you plan to watch only once.

I had some hopes for Die Ehe der Maria Braun, but those hopes found it a too difficult task to generate any real interest in me. It isn’t that the story isn’t any good or that the film is poorly made; on the contrary, the film is very well made (although it does smack a bit of Lars von Trier’s Dogme 95 style in places), and the story is an interesting one, up to a point. The problem is that it very much feels like I’ve been here before, like this is a film that belongs as the third film in a Lifetime marathon of films about troubled women.

Let me break it down for you. In the waning days of World War II, Maria (Hanna Schygulla) marries Hermann Braun (Klaus Lowitsch) before he goes back to the front. After the war, Hermann doesn’t return home, and Maria walks around carrying a sign with his picture on the back, hoping for anyone who might have seen him and who might have news. Eventually, she begins to believe that Hermann is dead, and she takes a job in a bar. It is here that she meets Bill (George Eagles, credited as George Byrd). Despite the language barrier and their racial differences (Bill is black), the two become something of a couple, and soon Maria is pregnant. This is all okay with Maria when she is told that Hermann is definitively dead. But of course he’s not.

Hermann comes home, finds Bill and Maria in flagrante, and all hell breaks loose. Hoping to stop the fighting, Maria clubs Bill over the head, accidentally killing him. At the military tribunal, Hermann takes the rap for her and goes to prison. She attempts to build a life for herself and for him in the hopes of his eventual release. She takes a job with a French company, working under Karl Oswald (Ivan Desny). She soon becomes his mistress and becomes wealthy enough to buy a house. She tells Hermann everything, saying that when he is released, their life together will truly begin.

But of course it won’t be that simple (After all, no Lifetime movie could resist further complications). Oswald finds out about Hermann and goes to him. He tells Hermann that if he will abandon Maria, he will make the pair of them wealthy. Hermann agrees and emigrates to Canada upon his release. However, he still sends a flower to Maria every month to remind her that he still loves her. And then, when Oswald finally dies, Maria finds out about this arrangement at the reading of the will. How she reacts to this essentially defines the movie, so I won’t spoil it.

And that’s it. We enter the world of a woman who really only had a single day with her husband, and the rest of her life was spent essentially waiting for that marriage to restart. It’s not a terrible idea for a film; it’s just really, really boring. That’s not something I say about a film too often, but it fits here. I didn’t care about the lives of any of these people. Maria is enough of an ingénue to be attractive, but not compelling enough for me to care that much about what happens to her. She seems more than willing to jump from bed to bed as it suits her, which makes her devotion to her husband almost ludicrous. In a more compelling character, I’d be willing to look at this as a sort of fascinating conflict, or a hypocrisy made interesting by the character. But not here. I just couldn’t bring myself to care about what happened to her.

And so it goes. Another day, another movie, and I’m still waiting to be wowed by something.

Why to watch Die Ehe der Maria Braun: A realistic depiction of a true survivor.
Why not to watch: It’s really hard to care.
Posted by SJHoneywell at 11:20 PM