I think I finally understand Robert Altman’s films. I tend to like Altman’s films when I actually watch them, but I also find them difficult to get myself involved in. There are multiple Altman films that I have seen the first half hour of, but couldn’t quite muscle my way through. I’ve lost track of the number of times I’ve tried to watch Short Cuts. So I have to brace myself for Altman, despite loving M*A*S*H and The Player. 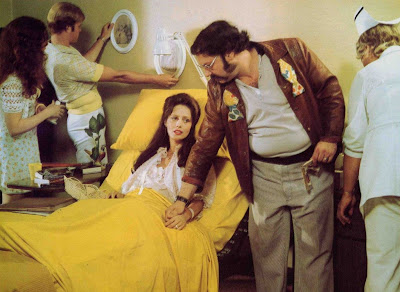 But now, having watched Nashville, I understand his films, I think. Where he tends to lose me is the massive size of the casts. All of his films seem to have these overwhelming casts and multiple stories that eventually sort of tie up. In this, Nashville is no different from other Altman films. With so many characters and names, I get confused and frustrated and eventually I just walk away from it and watch something else. I’d get lost in the battling stories and not want to continue.

There is, I think, too much going on here to provide anything like an accurate summary of the action (although I’m bound to try eventually). Everything centers on five days in Nashville and the intertwining lives of a couple of dozen people who undergo crises of faith, life-changing events, wake-ups to reality, or the fulfillment of dreams. Many of our characters are successful or wannabee country, folk, or gospel musicians, so there is also quite a bit of singing going on at various events. Additionally, in the background for all the film (and in the foreground for parts) is the political campaign of an independent running for president.

So there’s a lot going on, and many of the stories intermingle, bump into each other, or at least touch each other tangentially. The major theme for a lot of the stories is tragedy, disappointment, or a shattering of hopes. One of the main connecting themes is the creation of the political Replacement Party and the grass-roots presidential campaign of Hal Phillip Walker. This brings in the stories of Haven Hamilton (Henry Gibson), a country singer who is told to endorse Walker for a return endorsement for the governorship of the state. Hamilton agrees to appear at the rally at the end of the film if Barbara Jean (Ronee Blakley) also appears. But Barbara Jean is fragile and has suffered a series of breakdowns. It is one of these breakdowns that causes her dominating husband Barnett (Allen Garfield) to commit her to the rally. Following her is Pfc. Glenn Kelly (Scott Glenn), who may have stalkerish ambitions toward the fading singer. Also in the mix is Connie White (Karen Black), who will not appear on stage with Barbara Jean.

While Barbara Jean recuperates in the hospital, she shares a floor with the wife of Mr. Green (Keenan Wynn), who is being visited by his niece, Martha (Shelley Duvall), who really doesn’t want to see her aunt in the hospital and would rather spend her time chasing singers and performing whatever acts a groupie typically performs for singers. He also rents a room to Kenny (David Hayward), who is never seen without his violin case and seems twitchy about anyone else touching it.

And then we have Linnea (Lily Tomlin) who has a depressing marriage with Del (Ned Beatty), who is more interested in furthering his political aspirations with Hal Walker than in his two deaf children. Despite Linnea’s role as a gospel singer, she is tempted into infidelity with Tom (Keith Carradine), part of a folk trio. Of course, Tom is a serial womanizer and is also sleeping with singing partner Mary (Cristina Raines), who is married to the third member of the trio, Bill (Allen Nichols).

And then there’s Winifred (Barbara Harris), who wants to make it as a star, but is constantly pursued by Star (Bert Remsen), her husband, who is against the idea. Sueleen Gay (Gwen Welles) also has aspirations as a singer and the body to be a headliner, but has no ability to sing a note and not enough self-awareness to realize her own lack of talent. And through all this, Tricycle Man (Jeff Goldblum) shows up and drives through on his huge three-wheeled chopper and Opal (Geraldine Chaplin), who claims to be a BBC reporter making a documentary on Nashville, inserts herself into conversations and is never seen with a film crew.

So what’s the trick to understanding Altman? I’d argue that with a few exceptions, Altman doesn’t really want to tell stories. He wants to cut a slice out of lives and present them on the screen. What we see is messy because real lives are messy. We don’t have specific conclusions that we come to at a given time, and even when something in our lives does end, it doesn’t neatly wrap up into a package. Everything else in our lives continues on, unfolding its own plot as we continue. And that’s what Altman is giving us. In Nashville, we get a five-day slice out of the lives of a couple of dozen characters. A few things happen and time or fate or kismet brings many of those people to the same place at the same time for the end of the film.

That’s sort of the point. It’s not about the individual people or even their specific stories, but about how these stories mesh and blend and intertwine. The film almost becomes allegorical, with each character representing not a specific person in the real world, but a phenotype placed into this specific environment and story. And yet, on a real level, each story works as the story of a real person as well.

Nashville is a difficult movie to dislike completely because it is well made and because a number of the stories are compelling. It’s difficult to love completely because, well, it’s filled with a lot of country music, and a lot of it isn’t the good, classic kind. I have an intense dislike for the sort of redneck country that is frequently in vogue—the “Mom, trucks, God, and America” mentality that tacitly celebrates racism, antebellum values, and lack of education as positive values, and there’s a lot of that here. That it’s true to life isn’t the point.

But, it’s worth getting over that for this film. Nashville was difficult for me to get into, but once I got past the first half hour, I’m glad I stuck it out.

Why to watch Nashville: The stories all feel real.
Why not to watch: Have you heard country music?
Posted by SJHoneywell at 10:29 AM