O Brother, Why Stay Thou? 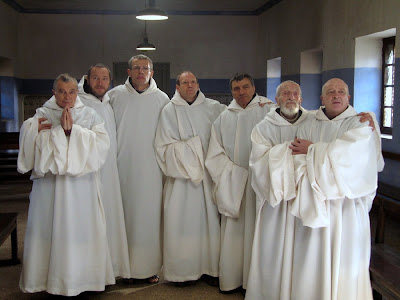 The plot of Des Hommes et des Dieux (Of Gods and Men) is relatively simple as plots go. However, the way these plots are put into action is strangely compelling. In fact this is another film like Black Narcissus that on the surface appears to be about a dull subject that will likely be told in a dull manner. It is, after all, a film about monks. For someone like me, with a religious background but no real current religious convictions or motivations, that is a hard sell.

Briefly, a group of Trappists live in Algeria. The monastery has evidently been in the location of this small village for some time and the monks are an accepted, even welcome part of the community despite its overwhelming Muslim population. The monks tend to the sick, work in their garden, and otherwise see to the daily running of the monastery. However, a group of fundamentalist Muslims has entered the area, and people are beginning to die at their hands. And thus, the question the film appears to ask is “What is the value of a life of sacrifice?"

What makes this film so interesting for me at least is that the monks appear to choose their fate. It is, perhaps, inevitable that they will at some point have a serious run-in with the extremists. They have multiple chances to flee the area. But they do not. That they stay is not what is noteworthy here. What is is their reasons for staying. Throughout, several of the brothers are film in their decision to stay at the Algerian monastery, while others come to this decision over time. For all, the reason is essentially that this is where they belong.

The film naturally has a strong amount of spiritual content, and it could not exist any other way. But this content is not jammed down the throat of the viewer. Instead, it is a quiet spirituality, a real world belief and conviction that is all the more powerful for its essential lack of theatricality. They simply believe in the value not of their lives, but of living as they always have, immune to the fear the terrorists want to engender. Their choice is one of peace and love over fear and hate. They stay because the people need them and they stay because this monastery is home.

It would not be difficult for Of Gods and Men to become a polemic against Islam, but the film does not make that particular choice. Instead, both the brothers inside the walls and the people outside the walls live in a sort of spiritual and religious harmony, The two groups have a deep and abiding respect for each other and for each others’ traditions. There is a simple beauty and poignancy in such mutual respect, and it is this mutual respect more than anything that motivates the brothers into staying. Thus, the Muslim extremists are treated as exactly that within the context of the film—extremists who do not represent the majority or even the sizable minority view of the people in the area.

What is evident here is a spiritual strength, and this sort of conviction in the face of everything is admirable. There is no earthly reason for the men to stay at their monastery, and so they stay for no earthly reason but for a divine one. That is smart and powerful filmmaking.

Ultimately, there is a quiet and moving strength here.

Why to watch Des Hommes et des Dieux: Another film that shows the power and value of a spiritual worldview.
Why not to watch: The real-world story behind the film.
Posted by SJHoneywell at 11:50 PM