So I've decided against a final film review or two for the year. 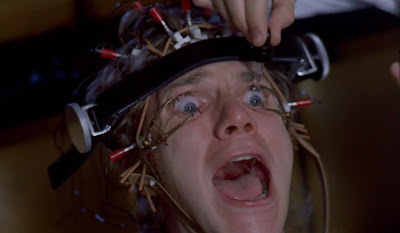 I put up 290 reviews from the list this year, which tops last year's total by 18, or 1.5 films per month. Not bad. I also broke the halfway point and have pushed further past. Since I'm assuming another dozen films will be added in 2012, it's good to be ahead of the game. I currently stand at 562 films reviewed, 527 to go.

It's been a noteworthy year. I joined the Large Association of Movie Blogs late last year, and that has ticked up my traffic a bit. What's really helped in terms of traffic, though, is podcasting. I caught the bug with a spot on the LAMBcast in July and have been hooked since. You can find me regularly once per month on the Movie of the Month LAMBcasts.

But that's only a small part of the podcasting story, of course. I've been welcomed by Nick Jobe of Random Ramblings of a Demented Doorknob to be a part of The Demented Podcast. It's been fun. Hectic sometimes, especially when some guests give me grief about my movie picks (Kai). But fun. I'm looking forward to the next season, which starts for me in about a week, and for you listeners in about two. Also coming very soon is my debut on Nick's vlog, which will start soon and can be found on his site.

So what's ahead? More films, of course. I've managed to get through most of the really long stuff, but there are still a bunch of films that are, bluntly, a bitch to find. I've got some work ahead of me on that front. My goal, stated now, is 25 films from the list per month, which will put me at 300 on the year.

It's been fun so far, and it's still fun. I think that's a good sign.