You'll Shoot Your Eye Out! 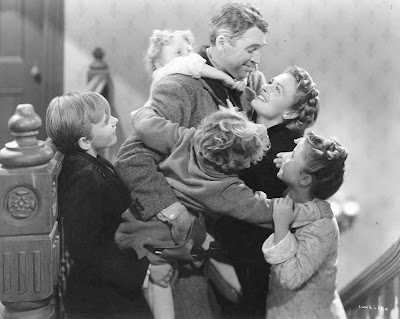 So, It’s a Wonderful Life is the story of George Bailey (James Stewart) and his small town of Bedford Falls. For the bulk of the film, we discover that George Bailey’s life is all about giving of himself to others and making everyone around him happy while getting nothing that he really wants for himself. And then it all goes to hell because of Uncle Billy (Thomas Mitchell) can barely remember to keep his pants zipped, let alone what he’s done with $8,000. And naturally there is the evil, twisted Mr. Potter (Lionel Barrymore) there to oversee the rapid demise of Bailey.

All in all, this should be a tragic and depressing film except for the intercession of wingless angel Clarence (Henry Travers) who comes to put George right and show him the true meaning and value of his life. The world without George Bailey, or at least the world of Potterville (nee Bedford Falls) is a gray and terrible place. There’s no Harry Bailey (Todd Karns), no houses for the masses of townspeople, George’s wife Mary (Donna Reed) turns into a spinster librarian (which is an unfortunate slam on librarians, dammit). And so we learn that George’s life is actually pretty good, despite the fact that he may end up in jail after all. But, this is a Capra film, so that’s not going to happen.

It’s a sweet movie. It still, 60+ years after its creation, manages to pull all the right strings, and no matter how many times I have seen it (and that number is pretty high), it still works exactly the same way every time. Every single time, I fall for it. It’s sappy and silly, and filled to the brim with saccharine sentimentality, and it never fails to entertain me or make me feel good. In many ways, it’s not really Christmas until I see this film.

What I like very much here, aside from the great performances all around, is that George Bailey is depicted as a real person. Sure, he’s a good guy. He’s the sort of guy we’d all like to know, and the sort of person we tell ourselves that we are, even when we know we’re not. But in the second hour of the film, George shows a real darkness that is necessary to the film. His world, the only world he has had and the world that he has spent his entire life trying to maintain, is suddenly shattered, and the wheels come off quickly and hard.

I like that. It doesn’t mean anything if George’s problems are cute or silly, or don’t have real consequences. He needs this dark midnight of the soul to bring him through to the other side.

And yes, like a sap, I go right along with him every time.

The basic story of It’s a Wonderful Life has been done and redone, imagined and reimagined time and time again, much like A Christmas Carol. There’s no need for this. The original film is still as good a holiday movie as you could ever hope to encounter. James Stewart is a great everyman because he seems so natural in that role. That, more than anything, sells the film. If we can’t relate to George Bailey, if we don’t sympathize with him completely and feel for the problems he is having and truly understand them, we don’t for a second buy into the film.

There are people who don’t like this movie. I feel badly for them. It must be difficult to walk through life emotionally petrified. 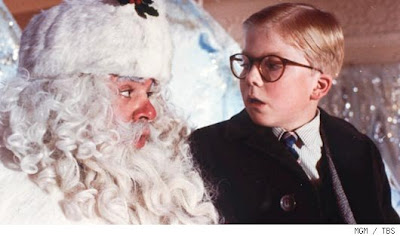 A Christmas Story takes place in essentially the same era as It’s a Wonderful Life, but the perspective is entirely different. This time, the film comes from the point of view of Ralphie (Peter Billingsly), who wants nothing more in the world than an official Red Ryder 200-shot carbine action range model air rifle. Unfortunately, standing in his way is his mother, his teacher, and even the Santa Claus at Higbee’s Department Store, all of whom tell him that he’ll shoot his eye out.

While this is the throughline of the film, in reality, A Christmas Story is really about being a kid at Christmas, about wanting something so desperately, as only a kid can want something. It’s about mom and dad being mom and dad, about memories and little brothers, and bullies, and getting in trouble. It’s about all of that, and a hell of a lot more.

The Christmas that is at the center of this film is arguably the most magical Hollywood Christmas in history. There’s no real magic, of course, but there is an incredible confluence of events leading up to the holiday that makes it incredibly memorable. It seems that every day brings something new, and for us, the viewers, that something new is almost always hysterical.

The film is aided greatly by a tremendous performance from Darren McGavin as Ralphie’s father. His performance is broadly comic and constantly entertaining. He’s long suffering, angry, and funny as hell. Equally long suffering is Melinda Dillon as the mother, who deals with everything the Old Man does, and still never gets to eat a hot meal.

Y’know what? Enough. A Christmas Story doesn’t need to have a plot, and it doesn’t really have much of one. It doesn’t matter. Who cares? This film is funny. It’s really funny. Every time I watch this film, I think throughout it that each scene is my favorite, only to forget what hasn’t happened yet. Just watching it tonight, I forgot, for instance, that the scene in which Ralphie and his brother Randy visit Santa comes really late in the film, and the fight against school bully Scut Farkas (Zack Ward) actually comes relatively early, or at least not at the end as I always remember it.

I love this film. It makes me happy. If it doesn’t make you happy, I feel bad for you. As with It’s a Wonderful Life, I’m sure there are people who don’t like this film, but I don’t want to spend any time talking to them. That, and I don’t know a single one of them.

So, go out and win yourself a major award. Stick your tongue to a flagpole. Sit on Santa’s lap and ask for a football. Write a theme about a bb gun with a compass in the stock and a thing that tells time. Get Chinese turkey for dinner.

Go watch this film. And enjoy your holidays, folks.

Why to watch It’s a Wonderful Life: It’s the most classic Christmas film imaginable.
Why not to watch: You’re soulless.

Why to watch A Christmas Story: Because it’s the funniest Christmas film imaginable.
Why not to watch: Bob Clark’s career after directing this.
Posted by SJHoneywell at 11:41 PM