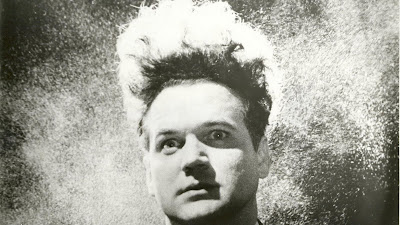 I’m not going to try to sum this film up or even explain it. David Lynch has gone on record as saying that all of the interpretations from critics and film viewers are wrong anyway. While that makes it tempting to try to find an explanation (and thus be the one person who actually understands the ferrets running around in Lynch’s head), I’m not nearly that smart or that brave. I’ll come right out and say it—I don’t get it. I have no damn idea what this film is about or supposed to be about or what its underlying meaning is. It is, essentially, a nightmare vision of a bleak and horrible world experienced by people buried in their own existential horror and paranoia. Oh, well, I guess that I did try to assign it a meaning after all.

Regardless, I’m not sure that Eraserhead can actually be reviewed as a film. Instead, I’d love to sit down with an art critic and have them review it, because I think that’s how it needs to be viewed. This is not a movie, despite the fact that there is some sort of narrative going on here. There is, at least, a progression of events even if I don’t understand what most of those events are or mean. The film essentially becomes its own environment, the industrial landscape, the bleak apartment of Henry Spencer (Jack Nance), the world that seems devoid of life aside from the people who shuffle through it. The constant white noise is a big part of this—the noise of the machinery in this nightmare city is inescapable, and thus becomes a part of that environment that the film creates.

And it is a nightmare. The people in this film are all horribly broken, or perhaps put together wrong from the beginning. Henry’s girlfriend/wife Mary X (Charlotte Stewart) has frequent unexplainable fits. Her mother (Jeanne Bates) is both accusatory to Henry and attempts to (I think) seduce him at one point. The (and yes, this is the name of the character listed) Beautiful Girl Across the Hall (Judith Roberts) appears to be the only person who isn’t physically malformed in some way, but she seems to exhibit a kind of spiritual or emotional deformity.

So let’s talk about some of the weird shit here, and no, I don’t mean “the entire fucking movie.” First, we have The Lady in the Radiator (Laurel Near in her only film role). She is one of the most disturbing visions in the film, with her bizarrely distended cheeks. At times, her cheeks look like the obvious prosthetics they are. At other times, the lumpy, cottage cheese-y facial structures are so disturbing that it doesn’t matter that they are obviously fake. Like virtually everything else in this film, she is nightmarish because of that physical deformity, and because it seems so at odds with the song she sings. But then again, she spends some of her time squishing things noisily, and then looking up for acceptance.

And then there’s the baby. Holy shit, the baby. The baby looks like the head of a cow fetus stuck onto a gigantic cocoon. And the thing moves, and breathes, and cries, and makes noise. I have no idea what the hell it is or how Lynch created it. But it’s horrifying.

I should also throw out a nod to Jack Nance’s hair, which really deserves its own line in the credits.

For all of this, and the fact that I finished the film with a whanging headache thanks to the constant white noise, I didn’t hate this film. I can’t say that I enjoyed watching it—I’m not sure it’s possible to actually enjoy watching Eraserhead, but I didn’t recoil from it or turn away. I had been nervous to watch this film mostly based on what I had heard about it. People made of sterner stuff than I have told me that it’s one of the only films that has truly frightened them. But I was not repelled.

I wouldn’t elect to watch Eraserhead again anytime soon, but that doesn’t mean that I wouldn’t want to explore it again some time and try to tease out something more from it. Nothing more than that can I say.

Why to watch Eraserhead: It’s a surreal vision.
Why not to watch: That vision is of a nightmare.
Posted by SJHoneywell at 11:03 PM