Most great comedic duos, at least the classic ones, work on the premise that one of the pair is the straight man and the other provides the bulk of the comedy. Dean Martin played the foil for Jerry Lewis, Tommy Smothers was the goofy part of the Smothers Brothers, and Lou Costello got far and away more laughs than did Bud Abbott. Laurel and Hardy worked much the same way, with Hardy as straight man. But Laurel and Hardy worked as well as they did because Hardy’s character was as much of an idiot as Laurel’s. 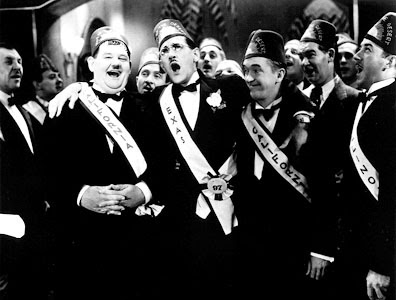 Sons of the Desert is a pretty straightforward story. Laurel and Hardy are members of a fraternal organization of the film’s title. The group has a convention coming up in Chicago, and both Stan and Ollie (they use their actual names here) take an oath that they will be there. The problem is that neither one wears the pants around home, and Ollie has already committed to taking his wife to the mountains at the same time.

So they create an elaborate ruse. Ollie pretends to be undergoing a nervous collapse, and Stanley hires a doctor (actually a veterinarian) to prescribe a long ocean voyage to Honolulu. Since Ollie’s wife Lottie (Mae Busch) hates the ocean, Stanley agrees to accompany him. Naturally, the two go to the convention instead, where they have a splendid time despite almost being caught at one point. But then the ship they are allegedly on sinks, and suddenly they don’t have a believable reason to not be on the boat, and thus are both going to incur the wrath of their respective wives. And, of course, everything the pair does sinks them further into hot water. It even causes a rift between Lottie Hardy and Betty Laurel (Dorothy Christie), since each is convinced that the other’s husband is at fault.

Like many early comedies, the film is concerned with its plot for only about half of its short (just over an hour) running time. It would have made a pretty dandy short film, matter of fact. The rest of the time is spent on sight gags, slapstick, Laurel muffing difficult words, and Hardy’s exasperation with his dimwitted compatriot. This is not a complaint or a problem. After all, the slapstick is what we pay our admission to see.

And it is funny. I image that in the 1930s, this was funny like few other things are funny. Today, it’s a little more difficult to get an audience to laugh with simple sight gags because we’ve seen all of these sight gags before. It’s important to remember, though, that we’ve seen them because other people have copied them. Watching a guy hit his head on a low beam is a standard comedy trope. Does the fact that it appears in this film multiple times in a row detract from the film? It’s easy to say yes. But many of these gags originated with Stan and Ollie. What we see in a film like Sons of the Desert is not old, hackneyed comedy bits, but those bits in their original, pristine state.

Laurel and Hardy are a comedic pair that has been copied time and time again. After all, what are Ralph Cramden and Ed Norton but these two characters reborn? What are Fred and Barney but a cartoon duplication of the same? The Skipper and Gilligan? Pair an angry fat guy with a dumb skinny (or little) guy, and you’re looking at an homage to these masters, intentionally or otherwise.

So it’s right and fitting that the pair should have at least one film on the countdown, and Sons of the Desert is a fine one. I haven’t seen a vast amount of Laurel and Hardy, so I can’t say that this is the best representative of their body of work, but it certainly isn’t a bad one. If there other films are as consistently funny and clever in their stupidity, there’s a reason that the duo remains as a sort of cultural comedic touchstone.

Sure, it’s not perfect. There are continuity problems throughout, generally involving someone getting soaked in one scene and being perfectly dry the next. So what? There’s plenty of overacting and goofy doubletakes and mugs to the camera. And? It’s funny. If you’re putting a Laurel and Hardy movie in the spinner, you shouldn’t need internal consistency or a driving narrative to keep you watching. It’s funny. You don’t need it to be anything more than that.

Why to watch Sons of the Desert: Because it’s funny. Why else?
Why not to watch: If you don’t like comedic overacting and over-reacting, Laurel and Hardy won’t do it for you.
Posted by SJHoneywell at 7:24 PM

Email ThisBlogThis!Share to TwitterShare to FacebookShare to Pinterest
Labels: comedy, Sons of the Desert, William A. Seiter