There is always a bit of melodrama in old Hollywood films. The heroes are always as close to purely good as possible and the bad guys have nothing of the good about them. The good guys always come out triumphant in the end, the bad guys come to an appropriately bad end, and the people we’re supposed to like live happily ever after. There are plenty of people who dislike movies before a certain point, and honestly, I can understand that. It’s one of the reasons I tend to really like film noir. While, thanks to the Hays Code, the bad guys always got what was coming to them in film noir, they at least had motivations that weren’t entirely evil. 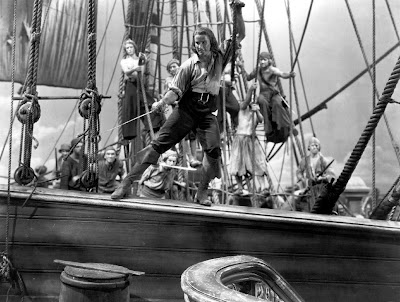 Captain Blood is not such a film. Dr. Peter Blood (Errol Flynn) is as perfect a movie hero as one could find. We learn right away that he is a) a medical doctor, b) willing to put himself at risk to save the life of a fellow man, c) has a history of sailing and adventure, and d) devilishly handsome. Called to the aid of a friend wounded in a rebellion, Blood is arrested as a traitor for giving aid to a traitor. Rather than being hanged, he is sent off to the West Indies by the auspices of the foppish and arrogant King James where he will become a slave.

It is here that Dr. Peter Blood is purchased by Arabella Bishop (Olivia de Havilland), niece of the local military commander, Colonel Bishop (Lionel Atwill). And I don’t almost need to say what happens next, do I? The pretty and idealistic Arabella does what she can for the benefit of the sexy, equally idealistic, proud and manly Tasmanian stud, who publically is displeased by this but secretly appreciates it. Romance blooms slowly. She helps out by allowing him to treat the gout problem of the local governor (George Hassell).

Of course, this doesn’t stop Blood from trying to escape, and escape he does when the Spanish raid the West Indies settlement. He becomes a pirate, soon developing a reputation and a huge fortune. It’s evident that the governor can’t handle the pirates and he is replaced in favor of Bishop, who does all he can to quell the pirates. In the ensuing chaos, Arabella is returned to England. Oh, but she’ll be back, of course. There’s no reason she wouldn’t be, since all adventure-y, swashbuckling films of this era need a strong element of romance. And it wouldn’t be too much of a shock to tell you precisely how it ends, since you likely have an idea already, but I won’t spoil it completely. It does, however, end precisely as you think it will. Actually, it probably ends quite a bit more positively than you might think possible.

It’s worth mentioning that the great Basil Rathbone appears here as a villain as well—he’s initially an ally of Blood but takes to piracy to easily and too thoroughly to be considered a good guy. It’s just as well, because Basil Rathbone plays a pretty good villain. Of course, this ends with a massive sword duel, one of the better ones of the early cinema.

This movie rises and falls on the talents of its two main leads, Flynn and de Havilland. Fortunately for the film, they are both excellent in their roles even if their roles aren’t at all believable. Really, no one is as pure-hearted as Peter Blood (and certainly not the real-life Errol Flynn), but that’s okay. It’s all a part of the mystique of the film and of the era it comes from. It would not be at all a stretch to suggest that this film is a big part of the pirate mystique, too. In fact, I might go so far as to suggest that in many ways, Captain Blood is a big part of the reason that pirate films are what they are, and why pirates—traditionally about as evil as one could get in the real world—have a romantic image in the public consciousness. Yeah, Pirates of the Caribbean doesn’t hurt either, but Captain Blood came first by 70 years and influenced everything that came after it.

It’s hard not to like this film on some level. It’s not believable, and the characters are certainly idealized versions that are nothing like real people, but there is a real charm here. Olivia de Havilland was an absolute charmer, and Flynn, well, he was a movie star in every sense of the word, at least in this early part of his career. For the early years of adventure films, they don’t get a lot better than this one.

Why to watch Captain Blood: It’s a hell of a swashbuckling adventure.
Why not to watch: If you don’t like old Hollywood, you won’t like this one.
Posted by SJHoneywell at 11:48 PM