Family Gatherings Must Be Weird 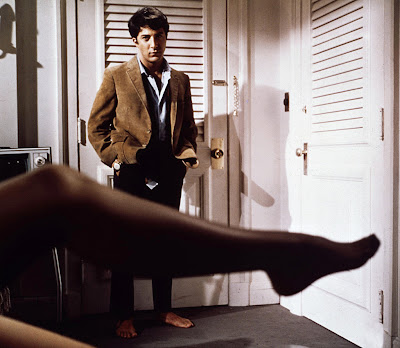 Certain films slip under everyone’s radar. Every film geek and snob has a film or two that they haven’t yet seen for one reason or another. Me? I have a whole list of those films. One of the ones at the top was The Graduate until just now. For the generation before mine, the older section of the Baby Boomers specifically, this is a pivotal film in many ways. One could argue it as one of the most important films for that generation pre-Woodstock, and I don’t think that argument would be amiss.

Because it is such a pivotal and important film, it’s a difficult one for me to judge, because I my initial response to this film is to dislike it mildly rather than be completely enraptured by it the way I’m supposed to be. It’s kind of icky. It’s supposed to be a blend of comedy and drama, and I get that it could be seen that way, but so much of it is unpleasant that I have trouble seeing it that way. It’s not unpleasant in the way a number of films I’ve seen in the past two years is, but there is sort of an oily film over it.

Benjamin Braddock (Dustin Hoffman) has just returned from college where he was quite the big man on campus. Now back, he is completely without direction, uninterested in getting a job and unequally uninterested in graduate school. He’s also very young—a college graduate and about a week from turning 21. At a party celebrating his return, he offers a ride home to Mrs. Robinson (Anne Bancroft), who attempts to seduce him and tells him that she is “available” to him whenever he wishes. Just to make things jolly and fun, her husband (Murray Hamilton, immediately identifiable by his voice) is the law partner of Ben’s dad (William Daniels).

This goes on for awhile. Ben drifts aimlessly (and quite literally in the family swimming pool) and has copious amounts of sex with Mrs. Robinson. He discovers that he really has nothing in common with her. She’s essentially a bored housewife who drinks and smokes constantly and is looking for a little something more in her life, thus Benjamin. Ben, on the other hand, is pretty much disgusted with himself for sleeping with his father’s partner’s wife, but can’t break away because he doesn’t have anything else to do. This changes when he is forced to take the Robinsons’ daughter Elaine (Katherine Ross) out on a date. After a very rocky start, the two end up falling for each other, making one creepy and strange love/sex triangle. Like I said, there’s sort of a film of oil on this movie.

And yet, in a very real way, I understand exactly what all of the hoopla is about. Liking this movie is all about the “when.” This is a movie that needs to be seen at a particular point in life, at a particular time or age, and I’m well past it. It reminds me in many ways of The Catcher in the Rye. People who read that book at 15 or so love it and identify with Holden Caulfield for the rest of their lives. I read that book in my 20s and wondered what all of the fuss was about. Furthermore, I wanted to reach into the pages and bitchslap that little snot.

And that, for me, is The Graduate. I’m in my 40s now, and find nothing appealing or interesting about these characters. Benjamin Braddock is a creep, a jerk. He does little but feel sorry for himself and whine about it. The world essentially gets handed to him on a plate, and none of it is good enough or interesting enough to do anything for him. Elaine is a mush and a bit of a twit, a pretty face with nothing behind it. And Mrs. Robinson is, bluntly, a selfish bitch.

But here’s the thing: all of that is completely intentional. I get precisely what the point of this film is, I think, or at least a possible reading of everything in it that makes coherent sense. I’m not going to say that everybody else has it wrong, but I will say that the people who find Ben appealing and somehow laudable have it dead wrong. He’s a punk and he’s supposed to be a punk. Ben does nothing but screw up, and that’s exactly what he’s supposed to do here. The film isn’t about Ben “rescuing” Elaine or about the affair with Mrs. Robinson, or Oedipal issues. It’s about listless people adrift in the world doing things because they can’t think of anything else to do. Ben and Elaine and Mrs. Robinson are pitiful and pitiable because they can’t really be anything else.

And so, for that, this film is genius.

I don’t love this film, and I’m not sure at this point if I even like it. I do, however, respect the hell out of what Mike Nichols has accomplished with it. He has, for lack of a better word, tapped into that feeling of ennui, that complete lack of a point that everyone experiences at one time or another. Everyone is Ben Braddock at some point in life.

I’m not that guy anymore, although I’ve certainly been him in the past. I think if I had watched this film during those years of my life, I may well have placed this as one of my favorite movies ever. I’d see Ben Braddock as something of a hero, or at least as a sort of cinematic spirit guide. But I missed my chance. And so this will remain a film for which I will have a deep and abiding respect, but it’s platonic. Try as I might, I just can’t love it.

As a final note, almost all of the most famous moments from this film come in the first 20 minutes. It's kind of a letdown when everything you know of a film happens right away; it's almost like there's nothing to look forward to.

Why to watch The Graduate: Arguably the most iconic film of the 1960s, and everyone borrows from it.
Why not to watch: There’s something unappealing about the characters and especially the situation.
Posted by SJHoneywell at 6:55 PM