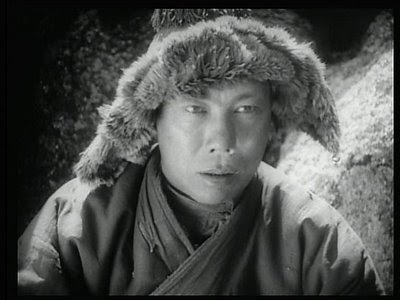 To me, there is something particularly Soviet about silent film, particularly silent epics like Potomok Chingis-Khana. I’m not sure why this is, but it’s true of all silent epics in my mind, not merely those that are actually Russian. These’s something about the behind-the-times feel of silent films that strike me as being like a lower end version of Hollywood that they feel sort of like Soviet attempts to mimic the West and simultaneously demonize it.

A young Mongolian trapper (Valery Inkijinoff) is entrusted by his father with a rare and valuable silver fox pelt. As the son is going to marker, he is entrusted with the pelt and told specifically not to take less than 500 marks for it. Sadly, the evil British capitalists cheat him out of his prize. A fight ensues and the young man is forced into the hills where he joins the Soviet partisans. All is well for a bit. A new Lama is discovered and crowned. Oddly, the British Army appears to be occupying Mongolia at this point.

But things change. Our hero is captured by the British, and it is discovered that he is a direct descendant of Genghis Khan. This inspires his captors to place him in charge of a puppet government, giving the local populace the semblance of being governed by one of their own (and one with a significant lineage), but in reality still being controlled by a foreign government. And this works well for a little bit until the newly crowned “ruler” decides to rebel, since his heart is with the glorious Soviet revolution.

Okay, so it’s a propaganda film. It’s mildly amusing to me that the bad guys here are the British, who were never anywhere in Mongolia, and there’s plenty of evidence to suggest that the glorious Soviet state was doing to these peasants the very thing they accuse the British of doing. This, of course is not surprising. The art of propaganda is convincing the populace that your enemies are doing precisely the despicable acts that you are currently engaged in yourself. But it is pretty amusing that the Brits got tagged for this. Or maybe not—Hollywood seems to like British guys as the villainous foil quite often.

There’s a lot going on here that doesn’t deal directly with the plot. For instance, there’s a huge build-up to the new Lama, and I suppose it’s funny that after all of the noise and confusion and pomp that the Lama is a little kid. But really, it’s a long way to go for a fairly minor joke. In fact, the entire section with the Lama is simply to force the British to go rustle some cattle and thereby encounter, wound, and capture the hero of the film. It’s far too long of a sequence for its purpose, and the payoff isn’t close to worth it.

My guess is that this is a function of the version I got. The Book lists this as a film just a touch over 90 minutes, while the version I watched is a good half hour more than this; my guess is that this extended middle section is a big part of what was added back in, and it’s not a very good addition. It makes the film drag, and the brutal soundtrack that accompanies much of this is better left unmentioned. It’s essentially the equivalent of giving two dozen kindergarteners some pots, pans, wooden spoons, and a couple of vuvuzelas and letting them go to town.

These two things are my biggest issue with this film. The first seems like a bad decision by someone deciding that adding in any cut footage could only improve the film, and missing the mark on that badly. The second is a decision by whomever created this version of the film, and that was equally a misfire.

The rest of this is pretty interesting, and it’s also beautifully filmed. Pudovkin does some interesting things with the camera and uses some innovative (for the time) camera tricks to heighten the action and in some cases add a surreal edge to it.

All in all, this is a great example of the montage style of filmmaking and a worthy addition to the pantheon of silent classics. But be warned that you’ll want the sound down for part of it due to the cacophonous “music.” And if there’s an option to pick the long version or the short one, go with the short one; you’ll be a lot happier in the end.

Why to watch Potomok Chingis-Khana: Soviet montage style on a Mongol horde scale.
Why not to watch: It’s roughly as historically accurate as the Twilight series.
Posted by SJHoneywell at 11:46 PM