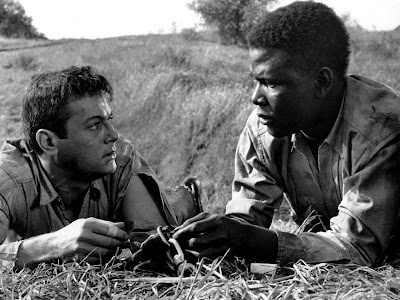 Months ago when Scott Knopf of the Frankly My Dear Podcast was Nick’s and my guest on The Demented Podcast, we talked in part about the film Shaft. Scott mentioned a list of films that he considered essential for understanding race in film, and specifically the African American experience in film. One of the films he mentioned was The Defiant Ones, one of Stanley Kramer’s films investigating racial politics before and around the Civil Rights era.

He’s right. With this film, we start to see a progression in the roles that black actors were able to take. In many ways, Sidney Poitier is the black man that middle America could handle at the time. He was part of a prison chain gang, but arrested and convicted unjustly, for a crime that no white man would have been accused of, let alone sentenced for. He reinforces the stereotype while at the same time being the safest version of an African American that many whites would accept.

Regardless, this is a gripping film. Heading back to prison in a chain gang truck, prisoners John “Joker” Jackson (Tony Curtis) and Noah Cullen (Poitier) are chained together, mostly at the behest of the warden, who knows the two hate each other. There is an accident, and the two are sprung free and head off into the backwoods in an attempt to escape. The two encounter a variety of problems, some because they are chained at the wrist and some because of their own racial division, and eventually bond over their difficulties.

It’s an old formula, in many ways started here first. Two guys who hate each other are bound together in some way, either literally or figuratively, and discover that a mutual respect and even friendship has developed. The events of the film, here involving a difficult climb out of a clay pit, a near lynching at the hands of an angry mob, and an eventual betrayal at the hands of someone they meet on the way, serve as a method to create the metaphorical bond between the men by the end of the running time. It’s every buddy cop film ever made, but this time with the buddies as escaped cons.

Films like The Fugitive borrow a lot from this one, too. We see this most in the time we spend with the authorities looking to catch our two escaped cons. In their own way, these two, Theodore Bikel as Sheriff Max Muller and Charles McGraw as Captain Frank Gibbons are experiencing their own buddy film, although the two of them never end up seeing eye to eye on anything. Throw in jazz music loving dog handler Solly (King Donovan), and you have two groups constantly at odds not only with each other, but internally as well. This is what makes the film work.

In addition to the folks already listed, we get a short but meaningful performance from Claude Akins as a man bent on lynching our two fugitives and Lon Chaney Jr. as a man bent on saving them from that lynching. Cara Williams shows up as a lonely woman looking for a little bit more than some companionship when the two fugitives show up on her doorstep, and she plays the role with a real sense of desperation that is perhaps a little unbelievable, but makes up for this in its essential creepiness.

Films like The Defiant Ones are important. These are films that need to be kept alive and talked about and studied. People need to not simply view this film, but really examine it, really look at the relationships that are depicted here and how they are shown. Hollywood, and indeed American society, has advanced in many ways since the late 1950s, but we aren’t all the way to where we need to be. The Defiant Ones, though, is one of the starting points. The Civil Rights Movement still would have happened without this film, but it certainly didn’t hurt for America to see a wrongly accused black man continually treated unfairly by the unthinking and racist folk of the film.

Despite the fact that this was filmed in the late 1950s, there is a distinctive noir feel to the film. I probably wouldn’t classify it specifically as a noir, but it does contain a lot of the same elements. I looked around to see if anyone else has classified the film that way, and evidently, when it comes at least to bloggers, I am alone. But I stand by that judgment. In terms of character, plot, tone, and especially pessimistic worldview, this belongs at least with neo-noirs or pseudo-noirs in some sort of pantheon. There’s a moral ambiguity here that fits in well with films like Double Indemnity.

It’s worth noting that director Stanley Kramer had quite the track record of films like this. In addition to The Defiant Ones he also directed Guess Who’s Coming to Dinner, Judgment at Nuremburg, and Inherit the Wind as well as a film about Julius and Ethel Rosenberg. Kramer should be better known and more respected than he is.

Why to watch The Defiant Ones: The beginning of race relations in film.
Why not to watch: If you have a “no old movies” hangup, you’ll never watch it anyway.
Posted by SJHoneywell at 10:55 PM