The Sparrow and the Rose 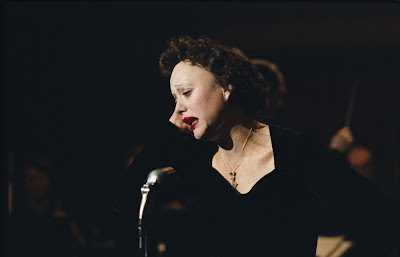 Sometimes, an actor’s performance is greater than the movie. A recent example is Tom Hardy in the film Bronson. That film is pretty much a 90-minute waste of time, a compilation of violent scenes, frontal male nudity and profanity. But Tom Hardy’s performance is so good and so memorable that despite the relative failure of the film, it is mesmerizing to watch. Such is the case with Marion Cotillard’s performance in La Vie en Rose. This is actually saying quite a bit, because the film is pretty good.

It’s worth mentioning here that every film geek I know and most film bloggers I know have a massive crush on Marion Cotillard. I suspect this is more from her role in Inception, but I also suspect that the more adventurous of them fell for her here. This is the very definition of a star-making performance.

The problem with any biopic is that the only way to make a good biopic is to make a film of a life filled with tragedy, and the life of Edith Piaf (Cotillard) had enough tragedy for multiple biopics. Abandoned by her parents, forced to live in a brothel as a child, dragged along in a circus, then forced to perform on the street, Piaf’s early life was struggle and poverty and hunger. Her first real mentor, Louis Leplee (Gerard Depardieu) was killed in a gang shooting, and many blamed Piaf for introducing him to the criminal element.

And then comes success, affairs, drugs, and the eventual dissolution caused by the same. As the film flashes back in time and forward to the point of her death, she has aged a full lifetime. Dead a few months before her 48th birthday, she looks nearly twice her age.

Piaf’s tragedy is that everything she touched was destroyed. The love of her life, boxer Marcel Cerdan (Jean-Pierre Martins) gives her joy and infuses her singing, but he is killed in a plane crash, destroying her world, even moreso because he was flying to see her at her request. No happiness for her lasts long, and always ends as tragically as possible. As such things go, both her temporary happiness and her continual tragedy infuse her singing with greater passion.

If I have a major complaint about this film, and I do, it’s that the non-linear style of the film is very difficult to follow. I don’t mind non-linear stories. I had no trouble following Memento, for instance. But there was something about this film that made this narrative style far less effective than a straight narration would have been. The constant flash-forwards to the decrepit, broken version of Piaf didn’t so much create a greater sense of tragedy, but a sense of inevitability. In other words, seeing her life progress from tragedy to tragedy would have made a certain sense. Skipping from tragedy to tragedy served only to muddle the story.

Still, it’s impossible to dislike this film entirely, and I did not dislike it. There’s simply too much here that is good. Some scenes, like Piaf’s true breakout performance, are truly brilliant. Instead of having us listen to her sing (which honestly wouldn’t have been too terrible), we instead see her perform and see the reaction of the crowd while music plays over the scene. It is surprisingly beautiful.

But really, as I’ve said earlier, the reason to watch this film starts and ends with the performance of Marion Cotillard. She plays Piaf in her early career as a kid out of her depth, self-conscious and shy, eyes huge and filled with both a quiet terror and desire. She plays Piaf in her heyday is out of control, desiring the acclaim of everyone and afflicted with a terrible need to perform and entertain. And she plays Piaf at the end of her life as something completely broken but compelled to ignore her own physical, mental, and emotional debilitation.

More than anything, there is throughout the evidence of passion. First, there is the passion of Cotillard for the role of Edith Piaf. Second, and just as important, are the twin passions of Piaf—her pursuit of her art and her own personal destruction. It helps tremendously to have Piaf herself performing the soundtrack. While I have no doubt that Cotillard can sing, very few people can sing like Edith Piaf did. I can’t admit to being a huge fan of Edith Piaf, but I recognize her particular genius and her incredible talent. The film would not be the same without her performances carrying the performances on the screen.

This is a film to see. It’s not a film to love, but it’s unquestionably a film to watch.

Why to watch La Vie en Rose: Marion Cotillard.
Why not to watch: What Edith Piaf turns into.
Posted by SJHoneywell at 11:48 PM