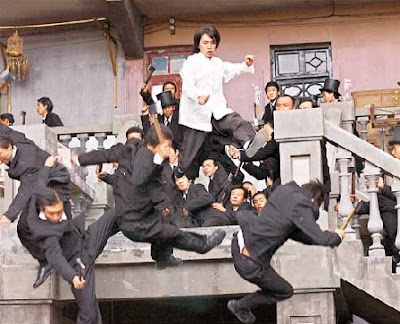 As I did last year, I'm going to nominate some films that should be on The List but that have been somehow overlooked. While I may well dip into personal favorite territory here, I'm going to try to stick with truly great films--films that are objectively great or important, or worth watching for a significant reason.

I will limit myself to 10 films, or roughly 1% of a given volume. I don't want to get greedy. As I did last year, I kept a running list of films that are strangely absent, and have decided on 10 that I think should make it on somehow. The following films are presented in no order, other than the order in which they came to me.

10 movies that should be added to the 1001 Movies list

1. Inherit the Wind: A great adaptation of what has proven to be an important piece of trial precedent in American history. This is a film that is still extremely relevant, and features great performances by all of the principle players. Run out and see this if you haven't already.

2. Roxanne: No film better proves that romantic comedies can be both truly romantic and truly funny. A stellar performance from Steve Martin helps sell it, and basing the tale on Cyrano de Bergerac seals the deal.

3. Stop Making Sense: The quintessential post-modern concert film. David Byrne in all his weird glory, a special appearance from The Tom Tom Club, and some funky-ass music.

4. Office Space: This film resonates with anyone who has ever worked a thankless, meaningless, mundane job. Or anyone who has worked in food service. Or anyone with a terrible boss. In other words, pretty much anyone older than 18. Oh, and it's drop-dead funny.

5. Kung Fu Hustle: Stephen Chow's best film is also his most accessible, his most entertaining, and his most frenetic. It's like Bugs Bunny snorted Vincent Vega.

6. Any film from the Harry Potter franchise: The Potterphiles can fight and argue about which one is the best, and I'd be happy to suggest Deathly Hallows parts 1 and 2 included as a single film. There are few cultural touchstones in the modern world as important as Harry Potter. That should be enough, but the film series deserves some love on its own merits.

7. The Nightmare Before Christmas: The only knock against this film is determining whether it's a Halloween film or a Christmas film. It's sort of both. It's also charming and fun, and just a touch scary for the little ones.

8. The Fugitive: If there's ever been an argument that television shows could successfully translate to the big screen, it's this rollicking action/suspense film. It's a great role for Harrison Ford and a break-out role for Tommy Lee Jones. Plus, the story is fantastic, and the camaraderie of the U.S. Marshals is surprisingly entertaining.

9. The Warriors: Somewhere between West Side Story and Boyz N the Hood came this nightmare, psychedelic vision of street gang life in New York City. Loosely based on an ancient Greek tale, the story of young criminals trying to get home when the entire city wants them dead is fun, has some great action sequences, and some of the most easily identifiable moments of the last 50 years.

10. Anything from William Castle: Castle was the master of goofy promotions, having moviegoers sign waivers against death from fright, for instance. One of his camp horror classics should be here, because there was no one quite like Castle. I'd go with The House on Haunted Hill, but the original 13 Ghosts or The Tingler would work, too.

And would you believe I've still got half a dozen for next year?
Posted by SJHoneywell at 8:01 PM