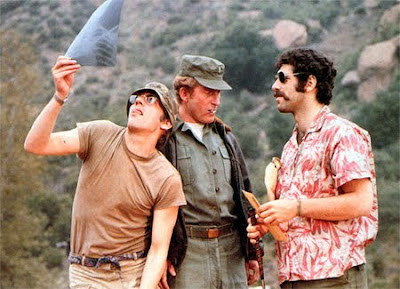 I wasn’t that conscious of movies when I was two or three years old, which is how old I was when M*A*S*H was released. As a kid, the most relevant thing with that name was the television show, the one that ran for three times longer than the war upon which it was based. I spent a lot of evenings watching the show, and as I got older and the show was eventually retired, I watched a lot of reruns. What that means is that I have a particular view of M*A*S*H, and it’s a view that doesn’t really jibe with the film.

This isn’t to say that the film isn’t great, though, because it is. It’s a very unusual film, though, for a number of reasons. It’s also very much an Altman film in that the cast is freakin’ huge and there are tons of characters to keep track of during the course of the film. However, as a person who is so familiar with the television versions of many of these characters, it’s impossible for me to tell if the film is difficult to follow. I know almost all of the main characters, so in a real sense, I know what to expect of them.

Essentially, we have a group of doctors in a mobile Army surgical hospital (hence the initials) a few miles from the front in Korea. They patch up soldiers when they come in wounded, and otherwise spend their time trying to forget that they are in Korea. They drink, play pranks on each other, and chase nurses with reckless abandon.

The doctors that we become acquainted with first are Hawkeye Pierce (Donald Sutherland) and Duke Forrest (Tom Skerrit, almost unrecognizable without the trademark mustache). They are the new surgeons at the 4077th hospital, and the minute they arrive, they begin to turn the camp upside down, getting things running the way they like them. This task is made easier because their commander, Henry Blake (Roger Bowen), is a pushover. It’s made more difficult because their bunkmate, Frank Burns (Robert Duvall), is a by-the-book officer and deeply religious. Things are compounded in both directions with the arrival of Trapper John McIntyre (Elliott Gould), who sides with our degenerate doctor heroes, and a new head nurse named “Hot Lips” O’Houlihan (Sally Kellerman).

Essentially, M*A*S*H is completely without a plot. There are events that happen, and we see the camp personnel deal with these issues. We deal with the issues of the doctors not being up to military muster, with the fact that the camp dentist, “Painless” Waldowski (immediately recognizable character actor John Schuck) wants to commit suicide because he believes he has turned gay, and a surprise trip for Trapper and Hawkeye to Japan. Everything eventually culminates in a football game with another military outfit, complemented on the 4077th’s side with a ringer—an ex-professional football player-turned-neurosurgeon named Oliver “Spearchucker” Jones (Fred Williamson), given that nickname not because of his skin color, but because he used to throw the javelin.

M*A*S*H isn’t about a story, or getting through a particular plot or series of events. Instead, it’s about surviving the insanity of war, and the irony of being a medical doctor in a place of death and destruction. In fact, one of the reasons that there is so much humor in the film is because it is a natural contrast to the pain and misery of war. The other reason is that extreme situations like war often bring this sort of behavior and attitude out in the people trapped in the middle of it. We laugh so that we are not sickened by it. This is also why a lot of the humor here is so dark and so cruel. That’s the only reason for the broadcasting of Frank’s tryst with Hot Lips, and why the shower is rigged to collapse when Hot Lips enters it.

The film also works because the operating room scenes are both brutal and banal. Men are on the table with horrible wounds, and while we don’t specifically see any body parts or grue (or at least not too much), there’s an ocean of blood, and the doctors and nurses are up to their elbows in it. At the same time, the doctors and nurses discuss average, everyday topics, almost as if they are fixing toasters.

Altman is a difficult director for me to get behind, often because there is so much to pay attention to in his films. There are often so many characters that it can be tough to keep everyone straight. M*A*S*H does not suffer from this though, although that may only be because I know these characters so well. This is a hell of a film, and one that has aged surprisingly well, a fact that may be due to the influence of television as well.

Why to watch M*A*S*H: It spawned a true American cultural landmark.
Why not to watch: There really isn’t much of a plot.
Posted by SJHoneywell at 10:58 PM