I talk about Old Hollywood a lot on this blog, in part because I know that I have a couple of occasional readers who are either devoted fans or who hate it passionately. I understand both sides. I have an appreciation for films of the ‘30s and ‘40s, but I understand precisely why some folks don’t like them. I feel it’s a duty to suggest when a film fits into that stereotype and should be avoided by the haters or when it transcends them and should be seen by everybody. 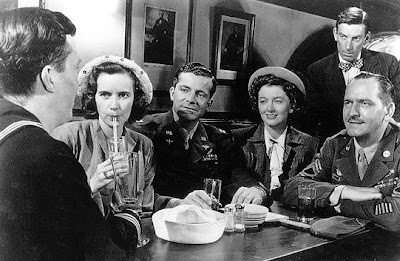 The Best Years of Our Lives is very much a film that transcends the stereotype of overacting, schmaltz, and pure escapism. This is a film that would have been very much at home following virtually any war. I could see this film being made about returning Vietnam veterans, or Gulf War veterans, or vets of Afghanistan. In short, while the details of this film have aged in many ways, the themes have not, and the story is still as fresh and real and vital as it was in 1946 in the days following World War II.

We follow the fates of three men. Fred Derry (Dana Andrews) was a bombardier in Europe. In the days before his deployment, he met and married Marie (Virginia Mayo). Now home, he has a wife he barely knows and no career. The only thing he’s capable of doing is working at his old job in a drugstore, spending part of his time behind the soda counter making floats and sundaes. His marriage never really got going and is now a shambles, in part because Marie was more in love with the uniform than with him, and in part because she isn’t content to stay home every night.

Al Stephenson (Fredric March) is the flipside of Fred. While Fred went from being poor in the real world to being a captain in the Air Force, Al went from a job as a loan officer in a bank to a mere Army sergeant (no disrespect meant to the sergeants of the world—this is strictly a rank issue. Sergeants, after all, make the military go ‘round). Now back with his wife Millie (Myrna Loy), daughter Peggy (Teresa Wright), and son Rob (Michael Hall), Al is attempting to fit back in to his civilian life. He does this with the liberal use of alcohol, much to Millie’s silent suffering.

Finally, we have Homer Parrish (Harold Russell), a Navy man who had both of his arms blown off. He’s left with two hooks for hands, and can do almost anything with them, except, as one of our other main characters notes, hold his girl, Wilma (Cathy O’Donnell). Homer’s story is in many ways the most tragic. For him, the loss of his hands means a loss of self-reliance. He wants only to be taken as the man he was, and sees any act of charity or assistance as pity, and he won’t have that. Moreover, he is unwilling to condemn Wilma to a life of looking after him because of his injuries.

What’s noteworthy about this film is that it doesn’t put a rosy spin on everything. Al’s drunkenness, for instance, is never really played for a laugh, but as a symptom of what he saw and experienced in the war. Called upon to give a speech at a gathering, Al continues to drink and Millie grimly ticks off the number of drinks he consumes. It’s tragic. Fred’s relationship with his wife turns sour the moment his back pay from the military runs out, and it never magically gets better because he deserves it or because that’s the way Hollywood movies work out. Their relationship enters a death spiral almost immediately and continues to circle until close to the end of the film. As for Homer, his anger and frustration are perhaps the most easily understood, but even here, we aren’t given a true Hollywood story. In the most poignant moment of the film, he brings Wilma into his bedroom and shows her the reality of his life without hands. It’s stark and painful and very, very real.

And this is precisely why this film is so good. It was created in a time when Hollywood directors and producers and studios sugar coated everything, a time when melodrama was king. But not here. These stories are real and visceral and human, which makes them compelling and worth watching. No one is spared the tragedy of these men returning from hell, least of all the audience.

It’s worth noting that Harold Russell really did lose both of his hands. He made only five movies in his lifetime, and this was his first. That he is less adept on screen than his costars is understandable. That he won a Best Supporting Actor Oscar for this role is equally understandable. While he is certainly not the greatest actor on this screen, he adds a real human touch to the film, and the presence of those twin hooks is so shocking and startling at first, the we almost ignore the man. By the end of the film, though, Homer Parrish the character is far more than the two metal hooks he wears, and that is a testament to any actor, as well as to a brilliant screenwriter.

This is a tremendous film, one of the great films of its decade and one of the great films of American film history. Just off years of making propaganda, pro-war films that boosted the morale of the home front, Hollywood managed to create one of the most powerful and moving post-war films ever conceived. The Deer Hunter works in much the same vein, but not with the same effect. The Best Years of Our Lives gives us no flashy situations, no violence or loss of life. What it does give us, though, is the sort of quiet human tragedy that any war creates. It is brilliant and sad and uplifting all at the same time, a true work of cinematic art.

As a final note, it’s been years since I saw this. The first time I did see it, I was a little kid. My father rented the film—on reels, no less—from the public library, and screened it on a fold-up movie screen in the living room. It was no less powerful now, 30+ years later.

Why to watch The Best Years of Our Lives: A film perfect for its own time, and continually relevant today.
Why not to watch: The title leads one to think it’s a film about happiness and fluffy bunnies…and it ain’t.
Posted by SJHoneywell at 1:19 PM