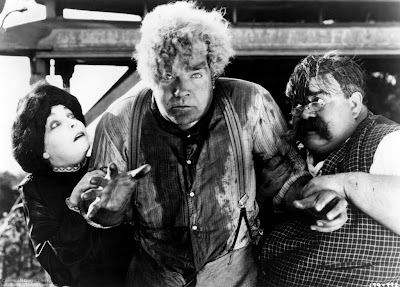 The first cut of Erich von Stroheim’s Greed was nine and a half hours long. Roll that around in your head for a minute. If you assume a 15 minute intermission every two hours, you could start watching it just after breakfast and finish just after dinner. I can’t for the life of me understand why someone would make a film that long, and I’ve watched all three of the extended versions of The Lord of the Rings in the same 24 hour period.

Naturally, the released version was considerably shorter, coming in at about 140 minutes. Naturally, von Stroheim had a conniption, claiming that the studio had butchered his heartfelt work needlessly. And so, multiple versions of the film have flitted around, with the 140 minute version being (for some time) the most common and the most maligned. A few years ago, a “restored” version showed up using stills and similar shots to replace some of what was lost. This version clocks in at about four hours.

All of this leaves us, the viewers, with something of a quandary. The four hour version by all rights is greatly superior to the butchered version. But, watching what amounts to an hour and forty minutes of still pictures is not unlike sitting through watching someone’s vacation photography. Suffice it to say that things are much easier on the eyes and the brain when there’s movement on the screen.

Anyway. As the title of the film indicates, the plot here is all about greed in its many and various forms. A guy named McTeague (Gibson Gowland) is apprenticed to a dentist, sorta. He’s apprenticed at least to a guy who claims to be a dentist. And he takes to the work. Eventually, he goes off on his own and sets up a practice in San Francisco. It’s here that he meets Marcus (Jean Hersholt), and the two become friends. This lasts only until Marcus’s cousin Trina (the awesomely named Zasu Pitts) arrives, and the two men fight for her affection.

McTeague comes out on top of that battle, and Marcus is a good sport up until the moment that Trina wins $5,000 in a lottery. At that moment, Marcus decides that he shouldn’t have given up on wanting to marry Trina. But all is not well. Trina, it turns out, is a complete miser, and she refuses to do anything with her money except horde it. McTeague eventually loses his dental practice because of Marcus’s machinations, but still Trina will not allow them to use “her” money to survive, and McTeague is forced into work as a laborer and the two live in poverty.

And then the trouble really starts. McTeague leaves, but eventually decides that he wants that money, and decides to kill his wife and inherit her wealth. This will concern us for quite some time with this film.

This is hardly a new story, of course. It’s a classic tragedy in which everyone has the same tragic flaw—a desperate love of money. The support characters suffer from the same basic problem, too. Throughout, characters make decisions based strictly on wealth and the desire for wealth, often choosing the specifically wrong thing because it offers a chance at cash. There’s nothing wrong with telling a simple story or telling an old story. It’s just that this particular story doesn’t require four hours to tell it, let alone von Stroheim’s original mindboggling 9 ½ hours.

There are some other things here that irritate me beyond the length, much of which could have and should have been cut. For instance, a great deal of the intertitles are written in dialect, which is painful to get through. Trina’s parents, for instance, are Old World German, so we get dialogue like, “…pe vairy goot to her…von’t you?” I don’t see that that enhances the story in any way. It makes me pause and try to interpret, and I don’t want to have to do that. I just want to watch the damn story.

The shame of it is that Greed could well be a fascinating story. There’s a certain level of strange, goggle-eyed fascination that comes with people who have the resources to do anything they’d like but are unable to spend a dime without purpose. Trina at the very least should be someone we want to know more about. The film goes there at times, showing her polishing her money and admiring it, for instance, but the long running time doesn’t offer nearly enough to satisfy, instead dealing with subplots of other people torn apart by the insane desire for cash.

It occurs to me after spending multiple hours watching von Stroheim’s directorial work on the screen that he was very much enamored of the idea of his own artistic vision, and damn the cost. But it also seems that his concern was with his own image as a director, and damn the cost of that even more. Greed gets part of the way there, but seems to be sunk under the weight of its director's enormous ego.

Why to watch Greed: The height of von Stroheim’s skill as a director.
Why not to watch: At less than half its original length, it’s still way too long.
Posted by SJHoneywell at 11:47 PM