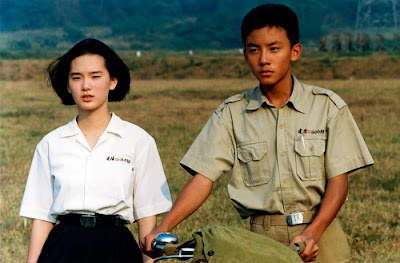 When I have time off work, as I do right now, it makes sense for me to seek out some of the really long, subtitled films that I still need to watch. And thus I spent four hours getting through (and yes, I mean it that way) Guling Jie Shaonian Sha Ren Shijian (A Brighter Summer Day). Watch me sum this film up in one sentence (thanks, Nick’s vlog): This film is West Side Story set in Taiwan and with less singing.

In the early 60s, a massive influx of Mainland Chinese to Taiwan created a country that had something of an identity crisis. Specifically, a lot of the youth felt lost and displaced, and so a number of them formed or joined gangs for a sense of community and identity as well as personal protection. This film deals with a couple of these gangs; we may as well call them the Sharks and the Jets for all it really matters. They don’t like each other. They squabble.

Then one of them starts dating a girl who lives in the other neighborhood. He gets pushed around a lot. Things get serious. He pushes one of the other guys in front of a truck and continues to date the girl he likes. Eventually (and yes, this is a spoiler. I’m saving you four hours of your life here) he realizes that she will never change and will always sort of be the female equivalent of a player. So he stabs her and she dies and he goes to prison.

Oh, and there’s a lot of singing. A couple of the kids translate American pop records phonetically and sing them. One of them has an ear-piercingly high voice and tends to sing the women’s parts on many of the songs.

Yes, really. That’s pretty much it.

I know this sounds like I’m giving this film short shrift, and I really am. But, in my defense, this was a tough watch. The version I could find (internet video is always my last choice, but is sometimes the only choice) was relatively grainy, making many of the principle cast difficult to distinguish. Additionally, many of the subtitles could not be read—it’s that white text on a white background problem all over again. So, for large chunks of the film, I had to intuit what was happening as best I could.

Furthermore, most of the characters went by their nicknames, which meant that I was dealing with characters named Airplane, Underpants, Shit, Prick, Tiger, Cat, Honey, Deuce, and Sly.

Edward Yang’s style is to tell the story impersonally, which works as well as it could given the circumstances. The film is almost completely devoid of close-ups, opting instead for mid- and long shots. This gives us a sense of the characters in their environment without allowing for too much emotional involvement with them. It’s actually pretty effective for what it’s trying to do. Or, at least it would be effective if I gave a flying rat’s butt about anything going on here.

Evidently, this was based on a true story. The murder in question was the first juvenile crime of real seriousness in the new regime, which meant a lot of press and a lot of scrutiny. In the real world, the perpetrator was given the death penalty, but eventually released from prison. We can assume that the same thing happened in this film, too. I guess.

Well, they can’t all be home runs, can they?

Why to watch Guling Jie Shaonian Sha Ren Shijian: You like little boys with high singing voices.
Why not to watch: You can think of anything else to do with four hours of your time.
Posted by SJHoneywell at 12:06 AM