Film: The Cook, the Thief, His Wife and Her Lover
Format: Streaming video from NetFlix on laptop. 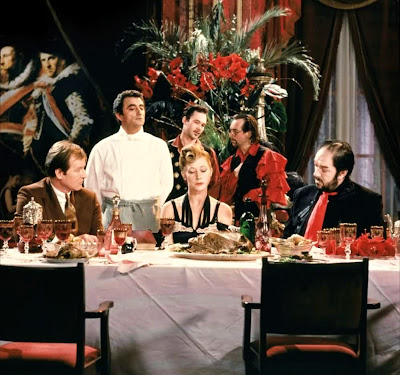 Sometimes after I watch a film like The Cook, the Thief, His Wife and Her Lover, I head over to IMDB and look at the parents’ guide just to see what it says. All I knew going into this one was that it started life with an X rating, which was eventually changed to the functionally equivalent NC-17. Oh, and I guess I knew that Helen Mirren is in it along with Michael Gambon, who is better known these days as the guy who took over for Dumbledore.

Anyway, I’m going to jump right into this one with both feet, and while there are a number of people in this film, I’m going to focus on the four in the title. We have a cook named Richard Borst (Richard Bohringer), who is renowned as a great chef and runs a very fancy restaurant. His partner in the restaurant is the thief, Albert Spica (Gambon), who is an absolute pig of a human being. In many ways, he is the most distasteful character I have ever seen in a film. He is loud, stupid, arrogant, mean, violent, and acts like a spoiled child. He is abusive of everyone around him, his wife Georgina (Mirren) in particular. And then there is the quiet, shy bookseller named Michael (Alan Howard). He eats in the restaurant pretty much every night.

Albert is such a complete bastard that Georgina spends a lot of time away from him, or at least as much as she can get away with. During one of her trips to the bathroom, she encounters Michael, and the two of them immediately begin having an affair. Their affair consists of trysts in the bathroom and in the kitchen with the full knowledge and observation of the kitchen staff. There’s plenty of full frontal here of both actors, and the sex is quick and almost ravenous—ravenous because of the passion and quick because it occurs in moments when Georgina is supposed to be using the bathroom.

Regardless, eventually the couple is found out and Albert goes into a rage. The two lovers are secreted out of the restaurant in an extremely disgusting manner and take up residence in the bookseller’s shop. The rest of the film is all about Albert finding out where they are, enacting his revenge, and then Georgina turning the tables on him. Go go gadget spoiler!

So Albert discovers that food is being taken to the pair by the restaurant, particularly by a young boy called Pup (Paul Russell) who washes dishes in the kitchen and sings liturgical music. Albert captures the boy and tortures him, sending him to the hospital, but discovers the location of the lovers because of the address printed on the inside of one of the books the boy borrows. Georgina goes to visit the boy in the hospital, and while this happens, Albert and his goons move in and kill Michael by force feeding him one of his books.

Eventually, Georgina returns and finds the destruction. She convinces the cook to, well, practice his craft on the body of Michael. He does—he cooks the body. The whole body. This is then served to Albert, who is forced to begin eating it. When he does, Georgina shoots him in the head, and the film ends.

This is a brutal film. The sex is particularly unsexy regardless of the shapeliness of Helen Mirren’s circa 1989 backside. In any other movie, the sex and nudity would be the centerpiece of the film, but here, it takes a back seat to virtually everything else. The sex is not the extreme behavior here—instead, it is Albert’s behavior that is consistently and constantly shocking because of its extreme vulgarity. A great deal is unexplained, or at least not understood by me. I don’t know why the boy sings constantly, except perhaps as a counterpoint to the vulgarity. I don’t know why there’s a guy in the kitchen who appears to wear nothing but an apron. I don't know why the kitchen is the size of a warehouse with tables spread about it. The stress on vulgarity does explain why a man is coated in dog feces and then urinated on in the first five minutes, and it explains why Albert forces the kitchen boy to watch him rape Georgina. It explains Albert’s dinner conversation and dinner companions (who include Tim Roth), too.

The art direction on this film is worth noting. Each of the parts of the restaurant is of a different predominant color. The exterior is blue, the kitchen is green, the restaurant itself red, and the bathroom is white. Characters have their costumes change all or in part as they move from one place to the next. Georgina gets up from the table wearing a red dress and appears in the bathroom in a white one. Her clothes were evidently made by Gaultier, and they are quite fashionable. Each of the sets is pretty amazing—the film looks very much like a painting.

I have heard that this film is a metaphor for the Thatcher administration. The cook evidently represents the long-suffering loyal British citizenry. The thief is Thatcher herself, conferring her attention and favors on the wealthy without regard to the rest of the country (or the patrons in the restaurant). The wife is Britain herself, raped and abused by the vicious and cruel master. And the lover represents the British liberal elite, romanced by the spirit of the country and eventually crushed by, as Rik from The Young Ones used to say, the “fascist Thatcheristic junta.”

It works as a metaphor. And it has to. The events on the screen are so repugnant that the only way to bear it is by seeing it as a metaphor for something. This is an uncompromising film and difficult to watch, but very much worth seeing, if only for the amazing visual appeal.

Why to watch The Cook, the Thief, His Wife and Her Lover: It’s art directed out the ass.
Why not to watch: It takes mincing baby steps toward Salo territory.
Posted by SJHoneywell at 10:07 PM

Email ThisBlogThis!Share to TwitterShare to FacebookShare to Pinterest
Labels: drama, Peter Greenaway, The Cook the Thief His Wife and Her Lover