Christmas season is well and truly upon us, and when it comes to holiday films, there are plenty that I enjoy. Die Hard is one of them. It’s not really a Christmas film except that it takes place during a Christmas party. It could just as easily take place at any time of the year, but since it’s the end of the year, well, here we are. 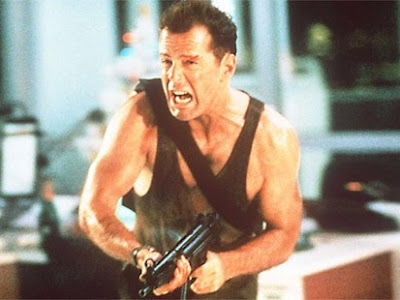 Die Hard is a simple film that takes its basic idea to an extreme, and does it about as well as it’s ever been done. John McClane (Bruce Willis) is a New York cop visiting his estranged wife in Los Angeles. His wife, Holly (Bonnie Bedelia), has gone back to her maiden name. She has a fantastic career as a top executive in a Japanese company, which might make the more perceptive and cynical viewer wonder why Mcclane is still working as a cop at all. Regardless, this is a step toward reconciliation between the couple—she has invited him out to her company’s Christmas party.

Once he arrives at the building, we get the meeting between the couple we expect. We are also introduced to company boss Joseph Takagi (James Shigeta) and international sales guy and all-around sleazebag Harry Ellis (Hart Bochner). And then the fun starts. A whole bunch of apparent terrorists show up at the building, hold everyone hostage, kill Takagi, and otherwise raise hell. However, when they show up, McClane is elsewhere, and thus he becomes the fly in the ointment for the bad guys, running around the building creating his own brand of chaos and doing anything he can to keep the hostages alive and screw up the plans of the bad guys.

That’s really it. Lots of explosions, lots of gunfire, a few crazy stunts, and an ending. There are a few other key roles not mentioned at this point—former beat cop-turned-desk jockey Al Powell (Reginald VelJohnson) shows up and acts as McClane’s advocate for much of the film and is responsible for calling in the cavalry. The bad guys are headed by a guy named Hans Gruber (Alan Rickman in one of his great roles), who is slick, suave, charming, and contemptible. We also encounter a television reporter named Richard Thornburg (William Atherton) who has delusions of grandeur and a very high opinion of himself. But really, this film is all about Bruch Willis kicking ass and not even bothering to take names.

I don’t really know why Die Hard works as well as it does except for the fact that it is, for lack of a better way to put it, completely balls-out at all times. What McClane goes through is extreme, his reaction is extreme, and the explosions are extreme. And it is awesome. There is no other word for it. It’s entirely possible that I call it awesome (I and virtually everyone else I know, mind you) because we were around in 1988 when this film was first released, but there is a reason that Die Hard is considered one of the great action films of…ever.

Bruce Willis is a big part of the reason for this. He takes a massive beating in this film and ends up slicked over with his own blood by the end of the film. He also makes a ton of wisecracks through the film, which is one of the reasons he makes such a great action hero. The other reason this film works as well as it does is thanks to Alan Rickman. Rickman is virtually always entertaining in any role, and Hans Gruber is a meaty role that he really sinks his teeth into. Hans Gruber is one of the great film villains not just because he is a suave bastard but also because just like McClane, he has a bunch of great lines, and Rickman delivers them with decided relish.

All of this adds up to a film that is riotously entertaining. There’s not a frame of this film that isn’t fun to watch. Further, this is a film that is fun on a second, third, (or as it was for me today) tenth or twentieth viewing. If you haven’t seen this, go see it now. And watch at least the first sequel which is crazier, harder to believe, and almost as much fun.

Why to watch Die Hard: Because it kicks ass.
Why not to watch: Eventually, this series dips into PG-13 and starts to suck.
Posted by SJHoneywell at 10:44 PM