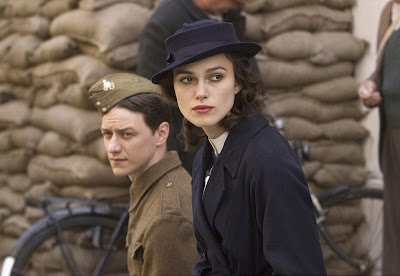 As seems the case with many a film set in Britain, all of the early action takes place on one of those giant estates with five servants for every person living there. We are introduced to Briony Tallis (Saoirse Ronan), a precocious 13-year-old who spends a lot of her time writing. In this case, she has written a play to be performed at a party that evening. The parts of the play are to be performed by Lola Quincey (Juno Temple) and her two brothers, but the kids quickly lose interest.

Briony doesn’t push this because she’s too busy eavesdropping on her sister, Cecelia (Keira Knightley), who appears to be all but humping the son of the housekeeper, Robbie (James McAvoy). This is a problem for the precocious Briony, because she has one hell of a crush on the good looking lad, despite the fact that he undoubtedly looks upon her as a little girl. We also see the same scene Briony does from a different perspective, and while there’s some sexual tension between Cecelia and Robbie, they’re far from having a tender moment.

Also appearing is the brother of Cecelia and Briony, Leon (Patrick Kennedy) and Leon’s friend Paul Marshall (the awesomely named Benedict Cumberbatch), heir to a large candy fortune. It’s evident that Paul is something of a horndog and is mildly attracted to Cecelia, but is evidently saving the best of his loving for Lola.

Anyway, as it turns out, there is something between Cecelia and Robbie, and Briony walks in on them consummating their relationship, which convinces Briony that Robbie is a dangerous sex maniac. When Lola is ravaged that night, Briony tells everyone that it was Robbie. Since he is the son of one of the servants, the lie is believed, and Robbie shipped off to prison, which causes a rift in the family. Cecelia leaves. Robbie is let out of prison in exchange for his joining the Army at the start of World War II.

So the rest of the film is essentially what becomes of the lie and what happens with Briony, Cecelia, Robbie, Paul, and Lola in the ensuing half dozen years or so. Naturally, this is necessary for the telling of the story. The problem is that it simply isn’t as interesting as what comes before. Briony is a far more interesting character as a child than she is as a teen (played by Romola Garai) or as an older woman (played by Vanessa Redgrave).

This is not to say that there isn’t plenty of impressive work here. There is. The long take on the beach at Dunkirk, for instance, is a masterpiece of camera movement, timing, and coordination. This is a fantastic sequence because of its complexity and because it seems so completely natural. It’s difficult to make something that complicated and big look that seamless and easy, and this sequence can and will be studied for a long time.

And yet, all that really happens in the scenes in France are that Robbie and his compatriots wander around in retreat, reach Dunkirk, and wait. Robbie goes a bit mental for awhile and we deal with that. Interspersed are scenes of Briony working at a hospital and not doing it very well, almost as if she is trying to pay penance for what she did to Robbie several years before. In fact, it’s not “almost” as if she is doing that—it’s precisely what she is doing. But again, it’s simply not that interesting.

Sure, the conclusion is great. The last 10 minutes or so of the film are pitch perfect. The 50 minutes leading up to that ending, though, simply drag.

Atonement is nonetheless a seminal film for several reasons. It’s a great coming out party for Saoirse Ronan for one thing. It also marks a moment for Keira Knightley to grow up on film, and it’s one of the first films I’ve seen her in that I found appropriate for her. Okay, I liked the first Pirates film, too. But really, she’s a sort of non-entity in my book until this film, which proved that she could handle a role with real dramatic range. And James McAvoy is generally good in most things he touches, and he’s just as strong here.

If only it were more interesting!

Why to watch Atonement: The first half.
Why not to watch: The second half.
Posted by SJHoneywell at 10:06 PM