The Seven Pillars of Wisdom 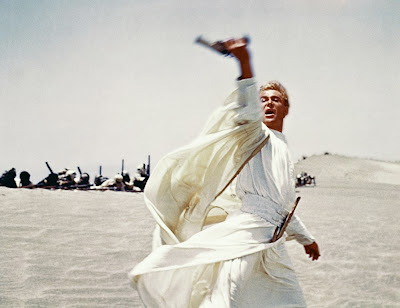 Epic films seem to come and go in waves. Every now and then, someone makes a great long film, and suddenly that’s what everyone wants to make. For a few years, all of the great films are three hours long or more, and a lot of the shitty ones are that long, too. At least until someone makes a tightly paced and controlled film of 90 minutes to show that it can still be done. Nobody did epic like David Lean did, though. While not all of his films are eternal in length, most of his great ones are. None is so great or so long as Lawrence of Arabia.

We start at the end of T.E. Lawrence’s life in a motorcycle accident. At his funeral, it appears that opinion on the man is rather mixed. Many consider him a great man and a hero while others are of the opinion that he was little more than a self-aggrandizing show off. The bulk of the film is the most important sequence of Lawrence’s life, which goes to essentially prove both that Lawrence was a great man and a supreme egotist.

Lawrence (Peter O’Toole) is a member of the British military during World War I, stationed in Cairo. Rather than fighting against the Germans, he is stuck essentially nursemaiding some British allies. He is transferred to Arabia to better understand the Arabian problem from the British perspective. The Arabian tribes are battling the Turks, and have only mobility on their side. The Turks have efficient and modern weapons including artillery and aircraft, which makes the life of the Turks difficult.

Lawrence learns of the harshness of the environment, both physical and political, first hand when his initial guide is killed by Sherif Ali (Omar Sharif) for drinking from a well that wasn’t his. The Arabs are at this point in history a splintered people, a collection of tribes who have at best uneasy alliances with each other, and at worst practice open war. Tribesman kills tribesman for water rights, leaving the entire population essentially at the mercy of the Turks.

Lawrence sees this as the biggest problem that the Arabs face. He sets about uniting them as best he can, winning over Prince Feisal (Alec Guinness) and using this influence to unite Sherif Ali with Auda Abu Tayi (Anthony Quinn). Lawrence leads men across the most severe and terrible desert so that his men can take the fortress town of Akaba from the land, claiming the guns there as well as the port.

And this, essentially, is the bulk of the film. Lawrence attempts to lead the Arabic people to unity and freedom, simultaneously battling the British interests in the region. His preference is for a free Arabia, a new power in the Middle East acting as a true nation of united people instead of a collection of warring tribes. In many cases, he feels he must bring this about against the will of everyone, including many of the Arab tribes.

There are a number of noteworthy things in this film. On the positive side is the incredible cinematography. This is a film that needs to be watched on a large screen, the larger the better. Much of what Lean wants to accomplish with this film is to show the severity of the landscape, so this is quite a bit of what we see. There are incredible long shots of the desert, often with a single distant rider slowly approaching. It would be easy for these shots to be boring, but they are not. Instead, they are starkly beautiful, even thrilling at times. Lean contrasts these long shots with intense close-ups of his principle actors. There’s a great juxtaposition of images here. The intensity of the interpersonal conflicts matches the intensity of the world in which these characters live.

Where I take issue with the film is in the casting. It’s nearly impossible to get too terribly upset about the actors in this film because they are all excellent, but it seems that the racism of the period has managed to filter into this film as well. Omar Sharif at least is of Arabic descent, but none of the other major Arab characters are. Guinness is pure British and Anthony Quinn is Irish-Mexican. And yet here they are playing Arab tribesmen. I find that difficult to stomach on some level.

While all of the major performances are great, it is O’Toole who makes the film, though. He plays Lawrence with true conviction. He is entirely believable as Lawrence because he believes himself to be Lawrence, and so we believe it, too.

Lawrence of Arabia is not a film to watch lightly. With the fill musical sections included, the film runs close to four hours long, making it a significant undertaking. This is not to discourage anyone from sitting down and taking this film in. It is a brilliant film from start to finish and entirely engaging. If nothing else, it is a brilliant example of a story in which the hero gets everything he desires and nothing at all at the same time. Lawrence is ultimately a tragic figure, but tragic through the faults of others and not his own.

Just make a lot of popcorn for this one, and plan your bathroom breaks carefully. You’ll need them.

Why to watch Lawrence of Arabia: Epic filmmaking at its greatest and most epic.
Why not to watch: I still don’t understand the casting.
Posted by SJHoneywell at 11:23 PM