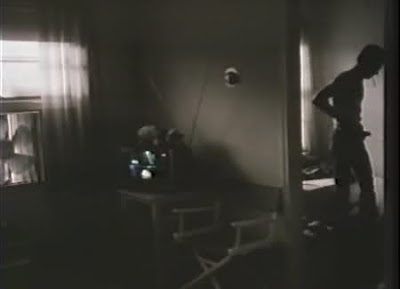 Sometimes, we are presented with something that we simply can’t really understand. Last Chants for a Slow Dance is sort of like that. It’s an ultra-indie film, made on a budget of about $2,000 (albeit 1977 dollars, but still), and it looks like it. In fact, it looks quite a bit like home movies of the Manson Family, or the formative years of Ted Bundy.

Tom (Tom Blair) is a drifter who appears to spend most of his time driving around Montana in his truck, allegedly looking for work. Back home he has a wife and two boys, and soon discovers that he has another child on the way. He claims to love his wife Darlene (Jessica St. John), but is unfaithful every chance he gets. He has no money, but has enough for gas to drive around and to hang out in bars and pick up women. He laughs almost constantly, like a nervous habit. Oh, and he’s also a stone-cold murderer who loots the bodies of those he slays, which might explain where his money comes from after all.

There isn’t a massive amount of narrative in this film. Generally, when we get a film that is lacking a basic plot and even a rudimentary story structure, it means that what’s left is a character study. I’m not sure this qualifies as a character study, either. It is, more or less, a slice of time out of this character’s life. We see him driving, we see him at home interacting with Darlene, we see him picking up women in bars and having sex with them, and ultimately, we see him pull over for a car in trouble and eventually shoot the driver and walk away smiling and singing.

Ostensibly, this film was based on Gary Gilmore, and I have no idea how accurate it is or how much came from the Gilmore case and how much came from writer/producer/director Jost. There is a chilling quality to it, though, a sense of a man simply “finding work” in a way that most of us would find repugnant. Tom doesn’t kill for pleasure or sport, but because he needs money. Once he has killed a victim, he’s not erotically satisfied or mentally sated. Instead, there is a sense of satisfaction, of having completed another job.

In that respect, Last Chants for a Slow Dance seems to presage a number of films. There is in some part a feeling of both Natural Born Killers and the Anton Chigurh character from No Country for Old Men in Tom’s almost nonchalance about murdering an innocent individual on the side of the road. For Tom, there is only the necessary goal of collecting enough money to keep going. Money in hand, he’s off to hunt women for sex and bars for alcohol until the cash runs out again and the cycle will repeat. He is, in a real sense, a predator of humans.

It’s difficult to tell if the film essentially looks like home movies (to the point of having sound unsynched with the visuals for the first few minutes) because Jost was going for that sort of look or because he simply couldn’t afford to do anything better. Certainly there is a homemade quality to the film, a sense of the amateur auteur. Jost frequently uses very long takes, planting his camera and simply filming what is in front of him for several minutes at a time. Often, particular scenes go on for much longer than it seems possible or advisable. But this works; it lulls the viewer initially into a sense of ease. At the end, the same lengthy takes of driving or of the roadside provide an opportunity to contemplate what has happened and what may happen next.

In short, this is a difficult film to take in. It is oddly powerful and strange, amateur without being amateurish. I am now very curious to see the other two films in what is loosely known as the Tom Blair Trilogy, but that is a project for another day.

(Note: While more films will be added next year and presumably every year, at this moment, I've hit the halfway point. 545 down, 544 to go.)

Why to watch Last Chants for a Slow Dance: The purest definition of indie ever made.
Why not to watch: Slight narrative and long takes of not much happening.
Posted by SJHoneywell at 7:09 AM