When the world suffers a traumatic event, one question that gets asked frequently is “Where were you when you found out about _____?” When it comes to the death of Princess Diana, my answer is quite a bit different than most. Sue and I had just purchased a little vacation home (emphasis on little) and were spending that weekend working on it. We were completely out of touch with the world—no television, no radio, no newspaper. We didn’t find out for a good 48 hours. So I found out while eating lunch in a little townie bar on a Sunday. 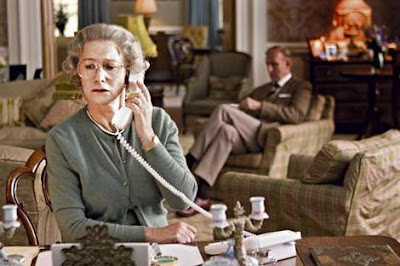 The Queen is not about Diana, but at the same time, it is about her. The film covers the few days about and around the death of Diana in Paris and the week leading up to her funeral. So, while Diana herself appears in this film only as newsreel and interview footage, she is very much at the heart of the narrative. However, the film is truly about the royal family and how they dealt with Diana’s death and the aftermath. Central to this narrative is the head of the family, Queen Elizabeth II (Helen Mirren).

What this film does is create a real sense of the royal family not as figureheads or monarchs or titular heads of the British Empire, but as actual people with lives and emotions. And, they have a number of specific concerns that virtually no one else in the world can appreciate. As the royal family, there are hundreds of years of precedent and protocol that must be followed at all times regardless of the reality of the situation. For them, the death of Diana was a singular and unique event.

Why? Well, strictly because they are royals. Diana had divorced Charles (played here by Alex Jennings) and was no longer a part of the royal family (an ex-HRH in the parlance of the film). Being a royal allowed for particular rights and privileges that now, based strictly on protocol, needed to be denied. And those rights and privileges were precisely what the rest of the world wanted Diana to have. The film depicts crowds of British citizens irate to the point of vehement anger that there was no flag flying at half-mast over Buckingham Palace. It didn’t matter to them, nor to the rest of the world, that the flag never flies at half-mast there. In fact the flag flies only to show the residency of a monarch. But that is what the people wanted, and its lack infuriated them. Precedent and protocol, a thousand years of tradition, no longer seemed to matter.

What this film does is, as I mentioned already, allow Elizabeth to become for the rest of the world a real person. Upon Diana’s death, her first instinct is to do what many of us would do; she looked to protect her family and attempted to keep the tragedy as a private affair within the walls of the family itself. She wanted the ability to deal with things on her own, to deal with her grandchildren not as royal scions, but as children.

The four members of the royal family who are actual characters in this film come off fairly unevenly. Both Prince Phillip (James Cromwell) and the Queen Mother (Sylvia Syms) come across poorly. Both appear hidebound and reduced to following tradition as a matter of course rather than for any good reason. Both seem almost devoid of sympathy or pity, wishing only for things to go back to the way they were before Diana’s fatal accident. Prince Charles comes across far more favorably, although by no means perfectly. There is a sense that he wishes to modernize the country and is willing to go along with the throngs of British citizens. There is also a sense that he is ferociously paranoid and fears assassination. The Queen herself comes off as a woman worn down by her duty and desperate to stave it off, but unable to do so. She is shown to us as a paragon of that long-gone past history when the monarch’s job was to face stoically whatever threatened her or her people.

But is it good? I’m happy to report that it is. Frears has managed to catch something on film that is almost completely unique. Elizabeth has always been a popular monarch, but this crises damaged her significantly. Frears sugar coats nothing, hides nothing, and exposes anything he can. As a result, Elizabeth becomes more approachable—more of a human being. In my opinion, she comes out of the film looking like a tough woman who doesn’t get to make many of her own choices, and who holds up as well as she can.

The film also deals with the election of Tony Blair (Michael Sheen), a Labour Party candidate. Evidently, the Labour Party contains the anti-royalist element of England, but as the film progresses, Blair begins to take pity on Elizabeth just as we do. His wife, Cherie (Helen McCrory), comes out as sort of the other side of the coin from Prince Phillip. She’s opposite, but still just as insensitive and uncaring.

I’m surprised that I liked this film as much as I did. But I did. The fact that Elizabeth favors corgis doesn’t hurt, either.

Why to watch The Queen: A fair and honest portrayal of one of the major figures in the world.
Why not to watch: Extensive reliving of the death of Diana.
Posted by SJHoneywell at 12:15 AM