I like apocalyptic and post-apocalyptic films. There’s something very human about people suddenly thrust into a world made dangerous by the machines left behind by the dead, struggling to complete the most basic of tasks because everything has broken down. Post-apocalyptic films tend to gravitate toward the idea of humanity struggling with its baser instincts in the struggle for survival. In the worst of times, both the best and the worst in people are brought out. 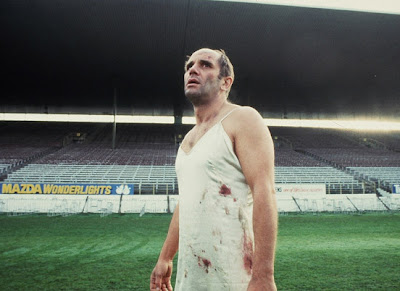 The Quiet Earth, on the other hand, plays much more like an episode of The Twilight Zone. New Zealand scientist Zac Hobson (Bruno Lawrence) awakens one morning to find that he is the only person left on the planet. In fact, he appears to be virtually the only living thing that isn’t a plant. There are no bodies, no traces of anyone, although there are signs that the people simply vanished—a half-eaten breakfast, a still bubbling coffee pot, and most ominously, a crashed airliner with no carnage in the wreckage, all of the seats found with the seatbelts still locked in place around…nothing.

Zac does exactly what we would expect him to do. He makes a short tape and loops it, broadcasting it on a local radio station. He moves into a large, swanky house. And then he starts to go slightly mad, declaring himself the president of the world, and shortly thereafter, the new God. On the brink of suicide, Zac relents, and attempts to live as normal a life as he can. And eventually, he is rewarded with human contact in the form of Joanne (Alison Routledge), and eventually, Api (Peter Smith).

As the film progresses, we learn at least a theory of what might have happened. Zac had been working on a project to create a global power grid, and it went live the morning of what he calls
“The Event.” It is his belief that the turning on of the grid made a huge shift in the fabric of the universe. Significantly, he, Joanne, and Api were all on the brink of death when The Event occurred, and this may be the reason why they still exist. Significantly, though, it appears that The Event is going to occur again and must be stopped if the three are going to go on living.

The best part of this film is the opening 30-40 minutes. It is here that we encounter Zac and the new world in which he lives. His quick descent into insanity is incredibly compelling. It starts out simply enough, graduates quickly into fantasies in which he plays every role, and ends with him walking around the deserted New Zealand cityscape in a bloodied and torn slip, causing destruction. At one point, he creates a tableaux of cardboard cutouts of world leaders—Hitler, Queen Elizabeth II, Richard Nixon—and addresses them from a balcony, declaring himself the president of the world. This is accompanied by a series of reel-to-reel tape recorders that he uses to cheer for himself on cue. This rapid decline is fascinating, and ends far too soon.

Strangely, it is the arrival of Joanne where the film starts to turn a bit, heading further into its decline with the arrival of Api. I don’t want to give the wrong impression—the film is still very good, and I think the arrival of these other characters is necessary for any sort of resolution here, but the film simply isn’t as good or as entertaining, Alison Routledge’s shapely bare ass notwithstanding.

Another downpoint of the film is the special effects. While a few of them are interesting and are a minor, rudimentary precursor to the hotel scene in Inception, many are simply dull, simple camera tricks and superimpositions that do nothing to help tell the story or sell the fact that the world is ending. A bigger budget here would have been well-spent, and would go a long way. In fact, I don’t feel at all strange in saying that the story is good enough to have warranted that sort of attention.

And it is a good story, albeit a very slow one. More than anything, it is the characters that sell this story. With so few actual people walking around and not much in the way of actual conflict aside from insanity and loneliness for the first hour or so, the characters absolutely must be compelling and interesting for us to continue watching. Fortunately, that is the case here. Bruno Lawrence is stellar throughout. One reason that I may have started to fade in the second half is that Routledge and Peter Smith, while decent in general, don’t have the acting chops to really pull this off as the story requires.

I don’t push for remakes that often, but this film warrants one. It deserves a meatier budget for the small number of effects it needs, and it could use some bigger names to draw in the audience. If the story was held to, I’d go see it in the theater, because the story is worth seeing, and deserves a chance at a wider audience.

I liked this film despite its flaws. Story wins out over the trappings, after all.

Why to watch The Quiet Earth: An oddly compelling view of the apocalypse.
Why not to watch: Even the best of its special effects are pretty…old Doctor Who.
Posted by SJHoneywell at 11:53 PM