I know very little about the modern state of Turkey. I know that they’ve had in the past an extremely oppressive government. I know this because one of my professors in grad school told me, and I figured that since she is Turkish, she’d have the first-hand experience to back it up. The country’s human rights record is pretty shabby, too. I know it’s a big, predominantly Muslim country that sits in a geographic crossroads. In some ways, Turkey is European, and has joined the EU. However, its location and dominant religion gives it strong ties to the Middle East as well. 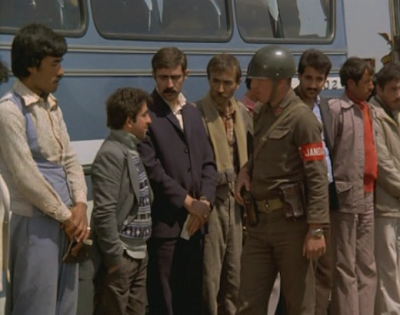 That’s about as much background as I had going into Yol (alternately known as The Way and The Road). This is a film with an interesting history; in fact, it may be the story of its creation that causes it to be a part of The List rather than the film itself. Yol is credited to filmmaker Yilmaz Guney, who never actually filmed a frame. Why? Well, he was in prison at the time. He “directed” the shots through his proxy, Serif Goren, who is given equal screen credit. When Guney escaped from prison, he edited the footage in Switzerland.

Naturally, Yol is a prison movie. It appears that in Turkey, prisoners are sometimes given furloughs to go out into the real world again and connect with their families, sort of like a vacation from jail. We spend most of our time with three men in particular. Each of them starts off on furlough together and each goes through a traumatic event before the furlough ends. Essentially, the film appears to suggest that even when not constrained by the walls of the prison, these men are still trapped in a very real way. They are hemmed in by family, culture, society, religion, and hundreds of years of tradition, and no less prisoners because of it.

One man, Mehmet (Halil Ergun), is in prison for his part in a heist gone wrong. During the heist, his brother-in-law was killed by the police. Now, his wife’s family blames him for the death despite the fact that he has maintained that he did not panic and desert his brother-in-law. However, he really did. Hated by his in-laws, Mehmet wants only to reconcile with his wife and children again.

Another man, Seyit (Tarik Akan), has a different problem. His wife has become a prostitute in his absence, bringing shame upon him and the entire family. Reclaimed by the family, Zire (Serif Sezer) has spent eight months literally chained in a barn and living on bread and water. The family waits only for Seyit to mete out justice against her for her shame and for the greater shame brought to the family. “Justice” in this case is an honor killing. Seyit, as might many of us be, is of two minds of this sort of punishment.

We also spend a good deal of time with Omer (Necmettin Cobanoglu), who wishes to rejoin his family in a village on the border. Because it is a border village, the army is attacking it repeatedly due to its people practicing frequent smuggling. Omer is caught in the middle of this, one the one hand trying to escape prison and on the other being trapped by duty and loyalty to his family.

In many ways, none of them dealing with the subject matter, Yol reminds me of Les Enfants du Paradis. It is a competently made and good film, but the story of its creation is far more involved and involving than the film itself. This is not to say that the film is without merit, but that Guney may well have made a greater artistic statement simply by creating any film in his situation than any film could have on its own.

What is constant here is the repression of the regime and of the culture. There is a culture of suppression evident throughout the film and in almost every action taken by each character. In many ways, Yol feels like an Eastern Bloc film. It matches the level of oppression in Czech and Polish films of a decade previous. The personal and social privation, constant vigilance against the state, petty losses of freedom, all of these are reminiscent of films that came from communist countries during the Cold War.

This is an interesting film, but also a frustrating one, and not a film to enter into lightly.

Why to watch Yol: A gripping portrait of a repressive culture.
Why not to watch: So many plots, it can be hard to follow.
Posted by SJHoneywell at 7:31 PM