What's Behind "Behind the Scenes?" 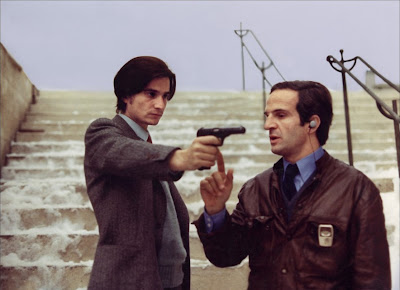 On a long enough timeline, every director will do a film about films and filming. Altman did with The Player, Fellini did with 8 ½, and recently Scorsese did with Hugo. Francois Truffaut did with La Nuit Americaine (Day for Night) in the early ‘70s, and in many ways his film is the quintessential meta film about filming. We have a crew making a movie about a woman who falls in love with her father-in-law. We see a couple of the important parts of the film as it continues, but mostly, we see the cast and the crew and experience the problems and frustrations of the filming process rather than the joy. Were some of the events not so tragic, these moments would be wonderfully comic. Instead, they are comedic with a large dose of tragedy in places.

Francois Truffaut directs the film and is also a major player in the film as Ferrand, the director of the movie within the movie. Much of the time on and off the set is spent with him as he attempts to navigate the process of completing the project. We see him deal with problems at virtually every level, from set design to casting decisions to the surprise pregnancy of a minor cast member, love-stricken stars, and a fragile female lead. It is completely unromantic and completely believable. His job appears to be little more than putting out fires constantly, swapping schedules, rewriting script pages, and wondering how he can complete the film in the time available.

His cast of players are just as believable as he is. His young male lead, Alphonse (Jean-Pierre Leaud), is smitten with the script girl Lilianne (Dani) and proposes to her, but she can’t remain true to him, running off with the stunt man instead. This leads Alphonse to a one-night stand with his on-camera wife Julie (Jacqueline Bisset), who is emotionally fragile and recently married to her doctor. The other female lead, Severine (Valentina Cortese) has faded and is fading rapidly, unable to remember a line. Instead, she wishes simply to say numbers so it looks as if she is speaking and then record in post. During all of this, Ferrand deals with rewrites on the script, animals that won’t do the job they are supposed to on camera, and a crushing schedule that forces changes in how the film is shot. Tragically, something happens to his second male lead (Jean-Pierre Aumont) that threatens the entire production.

In a large way, it’s difficult to see exactly why Truffaut continued to make films if this one was a capsule of his typical experience. Nothing in the production within the film goes the way he wants or needs it to, and every shot that we see is fraught with problems and endless retakes. Many of these retakes we sit through, seeing the same actors walk the same path and say the same lines. This happens repeatedly throughout La Nuit Americaine as if to emphasize that the most common emotion on a movie set is not something emoted by the actors but pure boredom. For Ferrand, though, the emotion is frustration, and it is near constant.

The thing about Truffaut is that I find him immediately and consistently likeable. It may simply be my own bias coming through based on his role in Close Encounters of the Third Kind, but I’ve always liked him on camera. He seems very genuine to me, as if he is not acting, but simply existing as his real self while a camera happens to be there. He’s just as likeable here and for exactly the same reason, although in this case, it’s likely he wasn’t acting so much as just relying on experiences he’d had in the past.

And yet, with all of the problems experienced on and off the set, there is a real sense of joy in this film. Despite everything, there is pleasure in the work of creating a film for Truffaut, and this comes through completely in his character of Ferrand. There is a particular feeling of pleasure in the struggle of getting through one more scene or jumping over one more hurdle and moving on to the next day. Ferrand expresses doubts in his film in one scene in the middle—his writing partner is working on a better project in Japan—but is continuing because of the irrepressible need to keep creating and to keep his flawed vision alive.

La Nuit Americaine does kill the magic a little. When we see the problems it takes to get a particular shot, it’s impossible not to wonder how much trouble Truffaut had in real life getting the same shots for the real film. I assume that in time, that opinion will fade, but I know that it’s a question I will have for the next half dozen movies I watch at least. How much am I not seeing? How much work and detail went into a scene? How many takes? I’ll never know, of course, but it’s something that I’m now made acutely aware is a question that can be asked.

Truffaut was a special filmmaker, and La Nuit Americaine is a special film. For anyone interested in film at all, particularly in what happens just off camera or when the camera stops rolling, this is the number one film to watch.

Why to watch La Nuit Americaine: One of the better odes to the film process ever made.
Why not to watch: It kills the magic to see the same scene over and over again.
Posted by SJHoneywell at 10:57 PM