Hope for the Best, Expect the Worst

When I was a kid, Bob Hope used to go to war zones and entertain the troops. I realize he did that before I was a kid, but that’s how I remember Bob Hope. It wasn’t too long before I started to get the impression that the riotous laughter of the troops didn’t happen because Bob Hope was funny. He wasn’t funny. Even as I kid I recognized that his act was pretty corny. I got the distinct impression that the troops laughed at the jokes more or less to make Bob feel good about flying all that way. They were, essentially, patting him on the head. 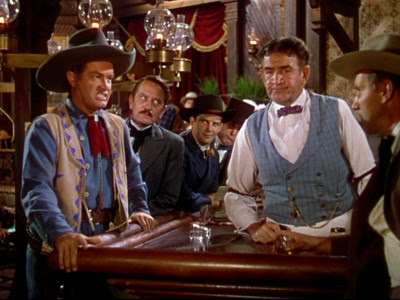 Which brings us to The Paleface. This “Western” “comedy” has four stars—Bob Hope, Jane Russell, and Jane Russell’s tits. But really, I should give you a little more to go on than that.

Calamity Jane (Russell) is in prison, but is broken out by an unnamed governor of an unnamed state. It seems that someone has been selling arms to the natives, and that needs to be stopped. So they offer Jane a full pardon if she can find out who’s doing what. They’ve decided to send a woman because the last agent was picked up immediately and found dead. The plan is for her to meet up with another agent, pose as a married couple, and head west in a wagon train.

So Jane heads out and discovers her first contact dead with only a cryptic note leading to the next link in the chain. With nothing like a plan, she encounters “Painless” Peter Potter (Hope), a sort of dentist without much experience who is being run out of town. She immediately agrees to marry him, figuring she can use him as a sap while she figures out how to get her pardon. Of course, once in Indian country, they meet up with some angry natives. Painless Potter panics and fires off a gun randomly while Jane, being the crack shot that she is, fights off the attack.

Of course, since she needs to protect her identity, he gets all the credit and he immediately becomes a hero. And so we have these two plots that go back and forth. She needs to figure out who the gun runners are (and discovers that there’s also dynamite involved), and he needs to discover that he’s actually not that brave, but that he might be when Jane is discovered to be in trouble.

Okay, so it’s a bit of a wacky plot that takes a lot of liberties with at least one historical character, and I don’t have any problem with that. Where I do have a problem is in the fact that this film simply isn’t funny. Allegedly, Bob Hope could tell a joke, but with a couple of spare exceptions, you wouldn’t know it from this film. Most of his schtick seems to be looking at Jane Russell’s chest and barking like a dog.

There’s plenty of humor that manages to be funny years after it was made. Buster Keaton, Charlie Chaplin, and Harold Lloyd are still funny. The Marx Brothers are still funny. Bob Hope, not so much. I understand that times have changed and the way we look at things has changed, but this film is little more than sexism (in both directions) and racism. And it’s hard to recommend anything that seems to get all of its comedic oomph from things that feel so backward.

Yeah, times have changed. They’ve changed enough that we should consider forgetting about movies like this one. This can’t be the best thing in Bob Hope’s career. We couldn’t get Road to Morocco?

Why to watch The Paleface: Because Bob Hope was an American institution.
Why not to watch: Because there has to be a better Bob Hope movie somewhere in the world.
Posted by SJHoneywell at 11:13 PM