The Savage Wars of Peace 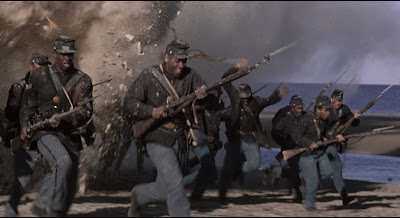 Every now and again, an actor takes a surprising role and proves that he or she has far more acting chops than previously imagined. That was my initial and main reaction to seeing Matthew Broderick in Glory. I had no doubts about the other major player in this film—Morgan Freeman, Denzel Washington, Cary Elwes, Andre Braugher, and Bob Gunton—but in a sense, Matthew Broderick is always Ferris Bueller or the kid from War Games, or even Gaston from Ladyhawke. That’s unfair, but in a lot of ways, Glory is the film that moved him into adult roles.

Colonel Robert Gould Shaw (Broderick) is a Union soldier who is wounded in the Battle of Antietam. After the battle, he returns to Boston where he learns that he is being offered his own commission—a volunteer brigade of escaped slaves and former slaves. Essentially, he’s going to be the first white officer in charge of a black Army regiment. He immediately recruits his friend, Major Cabot Forbes (Cary Elwes) and his friend Thomas Searles (Andre Braugher), a free-born and educated black man, becomes his first recruit.

And then we get to the section of the film that discusses racism and discrimination as if it is something that we no longer experience. Essentially, everything that can be used against the 54th Infantry is used against them. The quartermasters refuse to supply them with anything—including shoes—because they don’t feel that the troops deserve them. It takes Shaw essentially going in and destroying the quartermaster’s supply hut to get any action and get shoes for the troops. And this highlights another interesting piece of the puzzle. As it turns out, one of the recruits, Trip (Denzel Washington), is caught going AWOL and whipped. Shaw later learns that Trip wasn’t deserting, but was out looking for shoes because his feet are covered in sores and wounds.

It’s an interesting series of moments. Shaw, up to this point, has treated the men the same way he would treat any group of soldiers as their commanding officer. He remains aloof, going so far as to refuse to speak to Searles and, in fact, refusing Searles permission to speak to him. It’s not so much racism, but is certainly perceived by a number of the men as such. It’s Forbes who suggests that whipping an ex-slave is perhaps not the best choice in punishments, but Shaw goes through with it, commanding his vicious and brutal Sergeant Major Mulcahy (John Finn) to execute the punishment. It feels like racism very much, but in the mind of Shaw, it is the opposite—he is treating the men as he would any other soldiers.

We also learn that the troops will not be paid the same wage as white soldiers, and it is in this moment that Shaw endears himself to his men, by similarly refusing his own pay. Finally, the men are trained, they have shoes and uniforms, and they are sent off to the war. One of the men, Rawlins (Morgan Freeman), is pulled aside. He is told that there would be no commissioned officers who were not white, but that the regulations did not prevent the creation of non-commissioned officers, and he is given his stripes. It’s a nice moment.

Of course, it leads to further problems. It soon becomes evident that the 54th is going to be used only for menial labor and will not get into combat. They are given a quick taste of something when the follow another brigade of black soldiers into a town under the command of Colonel James Montgomery (Cliff De Young). As it turns out, it is essentially a raiding party, stealing everything they can from a town and then setting fire to the buildings. After that, Shaw and his men work at manual labor but itch to get into a fight. Passing white troops offer nothing but scorn regardless of the fact that they are also wearing Union blue. This is until Shaw confronts Montgomery and General Charles Garrison Harker (Bob Gunton) about their war profiteering. In short, he agrees to keep silent if they will send the 54th into battle.

And finally, the unit gets bloodied. Eventually, given a near-impossible task to complete, Shaw volunteers his unit to lead the charge against a Rebel fort in what is almost certainly a suicide march against a vastly superior enemy. The results of this are best left unmentioned in a review.

Glory goes about this story of racism in a very interesting way in that it focuses not on the black troops, but on their white commander. Certainly he feels some of the racism reflected back on him—he’s treated in many cases essentially as the same sort of pariah as they are. But really, he’s an outsider in the racism game. Characters like the educated Searles, the hot-headed Trip, the sedate Rawlins, or even the stuttering crack shot Jupiter Sharts (Jihmi Kennedy) would make for a much more interesting story. Seriously, these are the men fighting for their literal freedom in most cases, and with the word that the Confederacy will summarily execute any former slave in Union blues, for their lives. They, far more than Shaw and Forbes are the interesting story.

Where Glory really succeeds is in the depiction of the terror of war. The battle sequences may not carry the same weight or the same level of horror as, say, the opening 15 minutes of Saving Private Ryan, but they are decidedly brutal and sobering.

All in all, Glory is good, but perhaps not quite great.

Why to watch Glory: Because there are still some war stories that can be inspiring.
Why not to watch: Racism from the white man’s point of view is decidedly less interesting.
Posted by SJHoneywell at 11:38 PM