The Evolution of Revolution 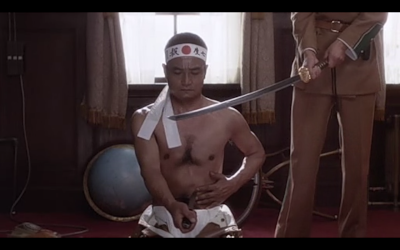 Biographies are always interesting to me. There is always a question in my mind as to whether or not something is accurate or not unless I know the answer going in. I knew, for instance, that a film like Yankee Doodle Dandy was highly fictionalized and had all warts and blemishes removed. A film like All That Jazz is somewhat fiction and not a true biography, but is still an excellent look at the director’s life. From what I understand, Paul Schrader’s Mishima: A Life in Four Chapters doesn’t dovetail precisely with author Yukio Mishima’s life and death, but it bears a definite ring of truth.

Like the film Time Regained about Marcel Proust, Mishima: A Life in Four Chapters conflates the author’s stories with his life. We see glimpses from his life and the world he grew up in as well as snippets from three of his books as well as a few other stories. Each of these is given the weight of autobiography as well, pulling events taken in part from the author’s life. In the first, The Temple of the Golden Pavilion, a young man with a stutter destroys a temple because its beauty makes him feel inferior. It is implied that Mishima spoke with a stutter as a child, and also mentioned that his youth was, at least in the eyes of his domineering grandmother, sickly. His childhood is matched against this story, which gives us a sense of his early life and desire to create. There are also some hints at homosexuality and uncomfortableness around women.

In the second story, Kyoko’s House, a young man essentially sells himself into sexual slavery for the benefit of his mother. The relationship quickly turns sado-masochistic and more than a little disturbing, and ultimately fatal. Here we learn of Mishima’s obsession with death, or more to the point, with dying well and in the right way to prove a point. There’s a cruelty in this part of the film that is evidently attractive to Mishima, a desire to suffer for the sake of art, but also a desire to suffer for the sake of suffering.

It is the third film that plays the closest to the narrative of Mishima’s life at the point we encounter him, though. In Runaway Horses, nationalistic fanatics attempt to overthrow the government and fail, ending with the leader committing suicide. As this is essentially what happened at the end of Yukio Mishima’s life, the viewer could easily credit Mishima with a certain amount of prescience, publishing the story a year before the reality.

In fact, it seems that Runaway Horses is a sort of manifesto of Mishima’s actual point of view. His character in the story longs for a return to the traditional past, a return of power to the Emperor and the destruction of the capitalism he feels has weakened Japan’s traditional culture. Interspersed with this story (as with the others, but more telling with this one) are clips of Mishima essentially espousing the same philosophy. As the character is abandoned by those who would help him, he continues forward anyway, just as Mishima does with his own poorly executed coup d’etat. As the characters swear to die to restore Imperial Japan, we see Mishima and his own followers swear essentially the same pact, signing in their own blood. It is in this segment (except for the end) where we get the most of Mishima himself, this story in many ways being the closest to his heart.

One of the benefits of a good biopic is that when it really attempts to reflect reality, we see the inner workings of the subject’s mind. Mishima’s mind was evidently a fascinating and scary place. So dedicated to the idea of nationalism and the return of the samurai tradition to Japan was Mishima that he created his own private army with uniforms of his own design, military regularity and samurai discipline.

While a great deal of the film rests on the shoulders of the adaptations of the three stories, the bulk of the film truly comes in the performance of Ken Ogata as Mishima. This is a powerful performance of a man dedicated to a way of life and an ideal to the exclusion of everything else.

Schrader made a series of interesting decisions throughout the film, all of which work beautifully. Many of the story excerpts are shown essentially as stage plays, lending both a sense of drama to them as well as a step away from reality, almost as if to tell us that we are seeing a play within a play, a story within a story. It is beautifully realized and works on every level from the color choices to the lighting effects. It is, in a word, masterful.

In fact, every aspect of this film works to near perfection. Philip Glass’s soundtrack is one I recognized from other films or at least from trailers without knowing that it had come from this film. It captures the action beautifully. The switch to black and white for Mishima’s segments in the three stories works as well, giving us an obvious cue as we switch between reality and fiction. This is a film to be watched more than once, a truly magnificent achievement in film as art and film as narrative. 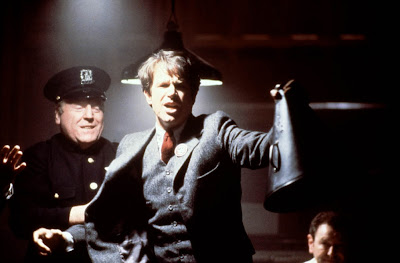 Reds, the 1981 film from Warren Beatty, follows a different revolutionary path and a different sort of revolutionary. The film follows the communist struggles of John “Jack” Reed (Beatty), an American journalist, and his time before and after the Bolshevik revolution in Russia in 1917. Perhaps no other film since has cemented the link between Hollywood and the extreme political left since this film, and had HUAC not already happened, this might well be the sort of film that would trigger such thoughts, particularly in those early Reagan years.

Reed was, by all accounts, an excellent journalist as well as an extreme liberal. He was also one of the founding members of the American Communist Party, and was in Russia during the 1917 revolution. In fact, Reed is one of the handful of Americans buried in the Kremlin, so highly was he thought of in the new Soviet Union.

But that’s jumping ahead. The early part of the film centers on Reed’s time as a journalist in the United States, writing for left-wing newspapers and trying desperately to make ends meet. He encounters Louise Bryant (Diane Keaton) and is immediately smitten by her, and it’s evident that the feeling is mutual despite her marriage to a local dentist. Reed persuades her to come to New York and follow her path of writing and discussion of left-wing political topics, and she does.

Their union, though, is not a particularly happy one. It tends to be filled with his own trips to other parts of the country to try to organize labor, leaving her with her work and not much else. It’s around this time that Louise meets playwright Eugene O’Neill (Jack Nicholson) who also becomes smitten with her, and while Jack Reed is away, Louise decides to play. This causes even more of a rift between the two, which they attempt to repair by getting married, which leaves O’Neill out in the cold and depressed.

Louise gets an offer from Horace Whigham (George Plimpton) to go to Europe to cover World War I, which according to Reed is nothing more than capitalists fighting over capital. But she goes, and during this time, Reed falls ill. He is forced into the hospital and has a kidney removed. He eventually follows her on his way to Russia because he is convinced that communist revolution is about to take place. It does, of course, and he and Louise are in the perfect position to cover it. When the revolution ends, they return to the States to write. Louise goes on a lecture tour to cover their expenses and Reed writes his magnum opus, “Ten Days that Shook the World.”

But the two can’t stay happy together. As the revolutionary movement in the United States begins to splinter into factions, Reed returns to Moscow to attempt to gain the Comintern’s approval for his new political party. Thwarted in that, he is prevented from leaving because the Party wants to use him to attempt to incite workers’ revolutions in other parts of the world. Eventually, Louise comes to Russia to find him, and, overworked and ill, Reed eventually succumbs.

This is a film for which it appears Beatty called in as many favors as he could. There are some small roles played by great actors. Paul Sorvino appears as an Italian communist who is alternately friendly and antagonistic to Reed. Gene Hackman shows up as a journalist who sometimes employs Reed but can’t quite get over his communist tendencies. Character actor Edward Herrmann plays a friend of the couple, and character actor M. Emmett Walsh shows up as a speaker at one point. Lots of small but entertaining roles for an excellent cast.

One of the best aspects of the film are the frequent remembrances of people who knew the actual Louise Bryant and/or Jack Reed. These ancient voices and faces pop up into the narrative at times, explaining the relationship of the couple as they understood it, commenting on the politics of the time, or simply remembering. If nothing else, this lends an air of authenticity to the production it would not otherwise have.

Reds is gutsy for appearing when it did and for taking the stance on Reed that it does. It is Keaton who truly shines in this film though. Louise Bryant—free love tendencies, extreme politics, and all—ends up as the most sympathetic and most human character in the drama. In all honesty, I’d rather watch a film about her than Jack Reed.

In the end, Reds is far too long. While part of the story can handle the epic narrative style, the part that can is merely a blip on this film’s radar. I could handle a 3+ hour film on Reed’s and Bryant’s point of view of the Bolshevik revolution. It’s the rest of their lives and their relationship that I find less interesting. Ultimately, the film is two-thirds of two different films glued together. It’s not the film it should be in many ways; it’s good and worth watching, but an adaptation of Reed’s book might be more interesting and more worthy of the epic length.

Why to watch Mishima: A Life in Four Chapters: A unique portrait of a unique mind.
Why not to watch: Not much happens that is happy for anyone.

Why to watch Reds: Because Diane Keaton rocks and because Jack Nicholson plays Eugene O’Neill.
Why not to watch: It’s much longer than it needs to be.
Posted by SJHoneywell at 10:07 PM