Breaking and Entering and Hanging Around 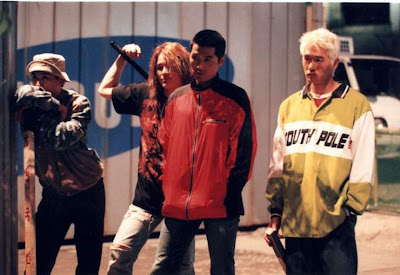 What do you get when you take a gang of four miscreants with nothing to do? My guess is that you could come up with hundreds of possibilities and not get close to Juyuso Seubgyuksaguen (Attack the Gas Station!, a film of surprising originality. This film takes the basic premise of four young men with nothing to do and a desire for easy money and gives it free reign, allowing the improbable to become both inevitable and ridiculous.

The film begins with these four guys robbing and vandalizing a gas station. They terrorize the workers and the owner, take all of the money, destroy a couple of signs and the vending machine, raise havoc, and then run off. A few days later, sitting in a restaurant and bored, they decide to do the exact same thing to the exact same gas station. However, this time, there’s no money. While they try to intimidate the owner into giving them the cash, a customer pulls up and asks for gas. One of the four goes out and pumps the gas, the customer pays and drives away, and an idea dawns. And thus our four miscreants decide to stay at the gas station they are robbing, service customers, and just leave with the money at the end of the night.

As the night wears on, stranger and stranger things start to happen with our four characters, and we learn just enough about them to help keep them distinguished. Actually, each of the four is completely different in appearance, but initially difficult to distinguish. The first goes by No Mark (Sung-jae Lee). He is the definite leader of the gang, the one the others defer to, and the one who tends to have the ideas about what they will do next. We learn that he is an orphan and was once a baseball player of some talent before a cruel coach essentially pushed him out of the game. Mu Dae-po (Oh-seong Yu) isn’t very bright and is used mostly as muscle. He carries a large stick of wood that he uses to beat others into submission. He has a real problem with being called stupid, and exacts revenge for such a slight.

Also in the gang is Paint (Ji-tae Yu), a failed artist who was kicked out of his parents’ house for not pursuing a real career. Paint, with his shock of white hair, is relatively calm throughout the film and spends a great deal of his time redecorating part of the gas station. Finally, Ddan Dda-ra (Seong-jin Kang) is a failed musician, and he looks the part with his wild hair and unusual clothing choices. His temper is just a notch lower than Mu Dae-po’s, probably because his career was destroyed because of some bad financial decisions.

But the personalities of the four characters are really secondary to everything that is going on at the gas station. They leave Mu Dae-po in charge of watching the gas station workers, and drag out one of them to teach them how to use the pumps. Deciding it’s too much work, they instead resolve to just fill up everyone’s tank and charge them the money, cash only, since they don’t want to have to deal with (and won’t profit from) credit cards.

As the night wears on, they start collecting more and more hostages. A gang from the local high school shows up to bully one of the workers, and they’re kidnapped and shoved up into the upstairs office as well. Other customers who complain are similarly captured and carted off or put into the trunks of their own cars and placed in an alley. The four order massive amounts of Chinese food and refuse to pay, which irritates the delivery boy. He in turn calls up all of the other delivery boys he knows and plans revenge. Similarly, one of the high school bullies escapes and gets more help, who in turn get even more help. And, of course, the police show up multiple times in all of this.

Juyuso Seubgyuksaguen is improbable and silly, but is also wildly entertaining enough that the odd premise really doesn’t matter too much. At each turn, things get more and more complicated and interesting, and more and more people start to get upset with the men at the gas station. Essentially pressure builds until the last fifteen minutes or so when everything comes to a head all at once in a completely ridiculous conclusion that ends in a massive melee.

And really, that’s all this movie is—it’s about putting something entertaining on the screen rather than making a particular statement about much. Oh, there’s a bit of a statement in there, mostly economic as concerned Korea in the late 1990s, but really, this is about seeing just how far this premise can be taken before it essentially explodes. Because it is so unpretentious, it’s wildly fun. This is a movie to sit back and watch with a huge bag of popcorn. It’s ridiculous and silly, and ends in an unexpected way. It’s also a reminder of just how much I like South Korean cinema.

Why to watch Juyuso Seubgyuksaguen: More proof that South Korean cinema is the most interesting national cinema around.
Why not to watch: It’s impossible to know if you should laugh at it or be disturbed by it.
Posted by SJHoneywell at 8:22 PM