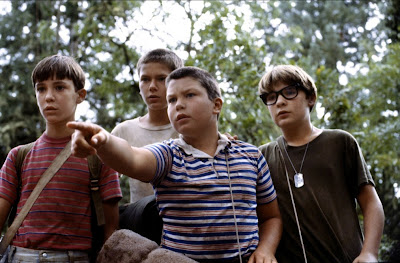 I have long been of the opinion that coming-of-age movies come in two varieties. For girls, coming of age is all about sex and coming to terms with their role as those who can bring life into the world. It’s not so much about motherhood and more about the responsibility of what sex can and does represent. For boys, coming of age is all about encountering death and coming to grips with the idea of mortality, the knowledge that life is transitory. For boys, perhaps no film both embodies and breaks this cycle like Stand By Me.

The film follows four boys on the verge of junior high in what will ultimately be the weekend that turns them from boys into men. Each of the boys is different, and each one is dealing with something specific in his life. Gordie (Wil Wheaton) is in many ways the stand-out of the group, and it is he who narrates the story (with Richard Dreyfuss in the role as narrator), telling it from his memory. Gordie is bright and comes from a good family, but it is a family touched by tragedy. Four months earlier, his older brother Denny (John Cusack) was killed in a car accident, and since that time, Gordie feels like he has become invisible, and that both of his parents feel like they’d have rather lost him than his brother. It is Gordie who tells us the story, and so the events very much come from his perspective.

Gordie’s best friend in the world is Chris (River Phoenix), a kid from a bad family and someone who seems predestined to turn out bad. He’s a tough kid with a father who drinks and with an older brother with the nickname Eyeball (Bradley Gregg), who is constantly in trouble. Chris has already started to fit himself into the mold of bad kid, having been suspended from stealing lunch money at school. Also in the crew are Vern (Jerry O’Connell), the “fat” kid who is also naïve and a little thick. His brother Billy (Casey Siemaszko) is another rotten kid who hangs out with Eyeball. Rounding out the crew is Teddy (Corey Feldman), who is a little unhinged, filled with anger, and is saddled with a father currently in a mental institution.

The plot centers around Ray Brower (Kent Luttrell), a kid who has gone missing. One day, Vern overhears his brother and another member of his gang discussing the missing kid. Billy and his friend stole a car and went joyriding, and found the body of Ray Brower about 20 miles away from town, evidently hit by a passing train. Vern tells his friends and they decide that they will go find the body and report it, becoming heroes. To do this, they’ll have to walk the whole way and camp out, but they figure it’s worth it.

And that’s really the movie. The boys walk through the woods, encounter a junkman and his “vicious” dog, a train, leeches, and more. And along the way, Gordie and Chris discover quite a bit about themselves. Chris deals with the fact that he’s too smart to be a bad kid but no one believes in him and Gordie deals with the fact that he feels like his parents don’t love him.

Stand By Me trades on significant scenes that don’t specifically move the plot forward but instead give us additional insight into the characters of the four boys. We also deal with Ace Merrill (Kiefer Sutherland), the leader of the gang of older boys who terrorize Gordie and his friends. This is not pleasant terrorization—there is a real sense that Ace is not merely a criminal in training but a fully realized sociopath barely able to keep his sinister urges in check. All of this culminates in a showdown at the body of Ray Brower in which the younger boys (particularly Chris and Gordie) are forced to make a decision that will affect them and their friendship from that point forward.

This is a marvelous film, one that it had been too long since I’d seen. I had forgotten just how good it really is, and how good the four boys are in their roles. They are good enough that I can’t think of other people in the parts. Cory Feldman, so often relegated to ridiculous sequels and embarrassing roles showed here that could, once upon a time, pull off a real role. River Phoenix brings surprising maturity to the role of Chris, yet it’s a believable maturity, one that seems natural. Wil Wheaton has a sort of emotional and moral center that makes him bigger than his slight frame. And Jerry O’Connell is so natural that it seems like he’s not acting, but simply living the script.

Stand By Me is a piece of magic, a captured moment between childhood innocence and adult experience. It is as good a film about growing up as exists. 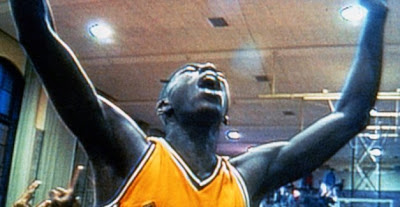 Hoop Dreams is a much different story about growing up, different in no small part because it is the real thing. The film follows the real lives of two Chicago high school athletes named Arthur Agee and William Gates. Both are inner city kids living in terrible conditions, but both kids have real ability on the basketball court. When the film opens, the boys are on the cusp of high school. As often happens in Chicago, the boys are recruited by area high schools, and both end up at St. Joseph.

What follows is their journey through four years of high school and the various troubles and problems they encounter as well as their triumphs. The goal of both boys, naturally, is to play in the NBA at a time (during the filming) when basketball was king in Chicago. And immediately, the two stories are as different as they are similar. Both boys attend St. Joseph on a scholarship for basketball. It’s determined that both boys are entering at about a fifth grade academic level, for instance.

But in terms of talent, it’s a very different story. Arthur ends up on the freshman team, and continues to struggle in school, not really progressing. He’s similarly immature on the basketball court. William plays on the varsity team as a freshman, and improves tremendously as a basketball player and as a student, but improves only enough to keep himself on the basketball court in many ways. A tuition increase before their sophomore year means a change in their lives. William’s family is unable to pay, but he gets assistance from a family near the school, allowing him to continue. Arthur, though, is removed from the school, which sets him back a half year, and he returns to the public school system.

And life goes on. Arthur’s homelife is turned upside down when his father leaves, and then returns a year later after spending seven months in prison. William’s father is not in his life, but he becomes a father himself. He also tears apart his knee, missing most of his junior year and reinjuring the knee in the last game of the season.

As the film continues, we the audience learn about the reality of life in the city, on the courts and in the schools. We learn, for instance, that many of the top high school players have their shoes and wardrobes essentially financed by drug pushers, who give the kids spending money. William learns at a Nike camp that college coaches aren’t as concerned with team play as they are with kids who can stand out.

Where Hoop Dreams succeeds is in making the lives of these kids real. It gives us a sense of the world they live in. Additionally, it shows us that the reality we all suspected all our lives is true. The kids who have the athletic talent are the ones who get special treatment. It becomes obvious at the start of sophomore year when the high school finds a way to keep William enrolled but cuts Arthur loose. The same thing happens at the Nike camp. The moment that William sustains a muscle injury, the interest in him fades. It reveals itself to be a meat market. The coaches essentially admit as much, realizing that these kids who throw themselves around the court are their meal ticket, and knowing that most of them will not make it to the pros.

It’s also evident that both of these kids have a lot of hopes and dreams riding on them as well as a lot of people who are looking to make a buck on them. It’s tragic in many ways. We see, for instance, William’s brother trying to live through him, and Arthur’s father pinning his hopes and dreams onto his son. It’s a deadly combination of expectation, pressure, and largesse from those around them. It’s a wonder any of them survive at all.

What Hoop Dreams shows us is that few of them do. The dream may survive in many kids, but for every one who makes it even to a major college program, let alone the NBA, there are hundreds who never make it past the playground and become just another person on the street. It’s noteworthy, though, that both of the young men in this film, at least as of a few years ago, have lived lives of service to their community and have dedicated themselves to providing opportunities for others.

Back in the days when I participated in sports, I was told that there would be character building and other tangible benefits of participation. Honestly, I didn’t learn anything, and I came from a high school that produced a few NFL players. Perhaps I wasn’t good enough and thus was not worth enough of the coaches’ time and effort for character building and lessons in determination. It seems, though, that William and Arthur were, and that they did learn something in spite of the crush of the meat market after all.

Why to watch Stand By Me: A bittersweet tale of childhood that sugarcoats nothing.
Why not to watch: It’s far more profane than you remember.

Why to watch Hoop Dreams: True human stories.
Why not to watch: You might not be prepared for scenes of actual knee surgery.
Posted by SJHoneywell at 4:37 PM