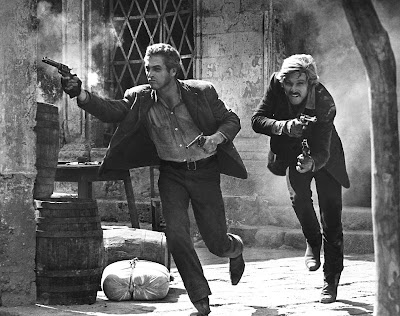 There’s a real problem associated with writing about a movie like Butch Cassidy and the Sundance Kid. The problem is that it is widely considered one of the greats of American film, an opinion (spoiler alert) with which I agree. I generally write a good 700+ words on every film I watch, but this one leaves me in the position of having to write that much without feeling like I have anything to add to the conversation. Everything I’d want to say about BCatSK has already been said, and by people better versed in film and smarter than I. And yet, Dear Reader, I plunge ahead.

The film catches up to our two eponymous heroes, Butch Cassidy (Paul Newman) and the Sundance Kid (Robert Redford) as they reunite with the Hole-in-the-Wall Gang. Butch reasserts his leadership over the gang and they plan to rob a train on both legs of its journey—once coming and once going. The first robbery goes relatively smoothly, aside from the presence of Woodcock (George Furth), who refuses to let the robbers have the money. They get the money anyway and celebrate at a brothel, which also gives Sundance a chance to meet up with his girl, Etta Place (Katherine Ross), a schoolteacher.

Things change on the next robbery. The gang attempts to rob the same train on its return trip, but discover a much larger, more intimidating safe this time. They use far too much dynamite and blow the entire train car. And then things get really bad. Another train arrives, and releases a posse dead set on catching Butch and the Kid. Over time, the pair discovers this posse contains some of the best trackers and lawmen in the West. To give themselves a little space, they reunite with Etta, head to New York, and then catch a boat down to Bolivia, which Butch believes is a robber’s paradise.

And it sort of is, but it’s not too long before Los Bandidos Yanquis are wanted everywhere in Bolivia, too. They attempt to go straight, fail, and soon discover that this life of crime and gunfighting might have a definitive ending, and it might be soon.

There are plenty of key scenes in this film, and these key scenes are a big reason why this film is rightfully considered one of the greatest Westerns ever made and one of the best American films of its (or any other) decade. The fight between Butch and Harvey Logan (Ted Cassidy) is a stroke of comedic brilliance. Harvey, much larger and meaner than Butch, complains when Butch wants to set rules for their knife fight. Butch uses Harvey’s confusion to kick him in the groin and then rabbit punch him into unconsciousness. It almost looks planned by the characters, but the genius is that it comes across as a spontaneous moment.

Then there’s the relationships between the three main characters—Butch, Sundance, and Etta. Etta is torn between the two men. While she sleeps with Sundance, she allows herself to be romanced by Butch, setting up a strange love triangle in which the three players are aware of and relatively comfortable with the parts of the other two. Nothing shows this as well as the bicycle scene, with Butch clowning on a bike for Etta’s amusement after Etta has spent the night in Sundance’s arms.

And there’s more, of course. There’s the cliff jumping scene, the marvelous montage of the trip to New York as well as another montage of the bank robberies in Bolivia. There is the excellent banter between Butch and Sundance that creates almost a sibling relationship between the two men; they feel free to pick on each other, but also stand by each other to the end. And then there is the end, which is one of the best in film history, a freeze-framed moment of time that allows us to see our heroes as we want to see them, but also lets us know precisely what their fate would be if we let the cameras roll.

More than anything, the reason this film works as well as it does is not the beautiful cinematography, the entertaining story, or the dialogue between our two antiheroes. It is the incredible chemistry between our two leads. There is a sense that these two men are not actors on a set or on location, but two guys who have known each other for years. They are comfortable with each other and completely natural with each other. It’s a chemistry they would explore again in The Sting, another period piece that may just be a little better than this one. But it suggests that even with a weak story and a sub-par script, the Newman/Redford duo would be worth watching for as long as they let us watch.

That, more than anything is the reason this film has remained a must-watch since its release, and that chemistry is still in evidence.

Why to watch Butch Cassidy and the Sundance Kid: It’s one of the best movies you’ll ever see.
Why not to watch: Because your world is dark and filled with hate with no chance of joy.
Posted by SJHoneywell at 8:09 PM