Film: Los Olvidados (The Forgotten; The Young and the Damned)
Format: Internet video on laptop. 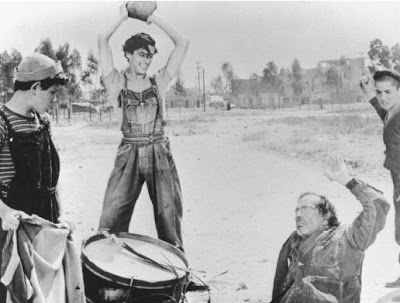 A message picture is one that attempts to show a problem to the world, raise awareness, and often to suggest a possible solution to the problem either in the main or in a specific case. That’s the typical message picture, at least. Of course Luis Bunuel was never a typical filmmaker. Los Olvidados (known as either The Forgotten or more commonly The Young and the Damned) is a film that walks like a message picture and talks like a message picture, but does something different entirely. Bunuel isn’t concerned here with finding a solution. It could even be argued that he’s not interested in highlighting a problem. Instead, he’s just showing life as it happens to some of the poorest people in Mexico, a world that we will naturally interpret as being filled with problems. He offers no solutions and no real commentary; instead, he just shows us this slice of possible reality and leaves it to us to judge it.

We spend our time with a group of street kids, boys who may or may not have a home, don’t go to school or have anything like an education, sometimes look for work, and general cause problems and commit minor crimes. A few of these boys will become central to the narrative. The first is Pedro (Alfonso Mejia), a young criminal who feels (rightfully) that his mother doesn’t care about him and that there is nothing for him in his family. Pedro wishes to improve, to please his mother, but can do nothing to make her happy, or much to notice him except negatively. The bad influence comes in the form of Jaibo (Roberto Cobo), who has escaped from reform school. Jaibo is unrepentant, vicious, and feral.

In truth, Jaibo is as sociopathic a character as you are likely to find in a film. His first action when he returns from reform school is to seek out Julian (Javier Amezcua), who he is certain turned him in. Julian’s denial means nothing; when his back is turned, Jaibo beats him over the head with a rock and then a large stick, killing him. Pedro is witness to this, and Jaibo gives him a portion of Julian’s money, swearing him to silence. It is this event that causes Pedro to really want to change for the better, and he gets a job at a blacksmith’s. But Jaibo ruins this as well, stealing a knife, setting it up so that Pedro is accused and sent off to reform school. Meanwhile, Jaibo does what he can to put himself in good with Pedro’s mother (Estela Inda). It’s soon evident that Jaibo isn’t looking for a mother, though.

Los Olvidados pulls no punches, and deals with the reality of the lives of these children. And they are children. Pedro is maybe in his early teens, but he deals throughout with the sorts of cares and concerns that many adults would be hard pressed to understand or work through. These are not kids playing at being criminals, but kids who are fully realized criminals. It’s easy to forget when we see their youth that Jaibo might be all of 14 or 15, not really a child but in no way a man. He is, after all, a murderer within the first half hour or so of the film.

This unflinching look is what makes the film. But unlike most message films, Los Olvidados offers us no respite and nothing to make us feel good at the end. We are left only with the lives of these kids and the hell of their existence, the fact that nothing good happens to them, and that even their best intentions are turned against them. The film is a mere shade away from ending up with the audience watching with a gun in its collective mouth.

That’s the point, of course. To give this a happy ending (more on this in a moment) would be to destroy everything that Bunuel wants to accomplish with this film, which is to show both the poverty and the desperation as realistically as he can. It takes something from Italian Neo-Realism, although Bunuel can’t get completely over his surrealist roots, giving the film an interesting dream sequence. It’s harsh and brutal, and it should be. It’s not interested in telling us how to solve problems like Pedro and Jaibo, but simply to show us that they exist.

There was a happy ending created and tacked on in some versions. Even the idea of it destroys the entire function of the film. It was created because Mexican authorities wanted a more positive image of the country. Fortunately, the original ending is available, and is the one to watch. The tragedy here is that when he is sent to the reform school, it appears that Pedro will turn everything around. That he tries speaks to the human spirit, and what happens when he does speaks to the human experience.

Why to watch Los Olvidados: Brutal and unflinching.
Why not to watch: Bunuel offers only the depiction, not a solution.
Posted by SJHoneywell at 11:54 PM

Email ThisBlogThis!Share to TwitterShare to FacebookShare to Pinterest
Labels: crime, drama, Los Olvidados, Luis Bunuel, The Forgotten, The Young and the Damned