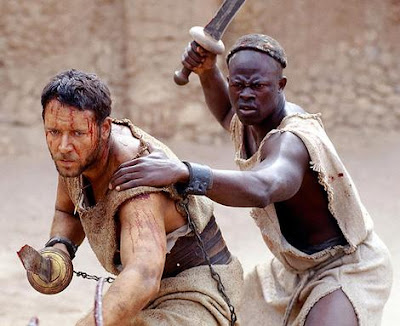 When the Academy Awards for 2000 rolled around, I don’t remember there being a lot of doubt that the ultimate winner for Best Picture would be anything but Gladiator. There may have been a little buzz around the other films, but Gladiator was the one on everyone’s lips. I drank the Kool-Aid as much as anyone. I remember watching it with my wife and being surprised at just how much she got into it as well.

Like many a historical epic, Gladiator takes some license with the source material. A great deal in this case is made from whole cloth in that most of the characters (including the bulk of the major cast) are simply representative of the time and history. While I cannot be sure, only Commodus (Joaquin Phoenix) existed in the real world. License was taken with him, but less than you might expect. His reign was short and plagued by political intrigue, and some historians have determined his reign as the beginning of the fall of the Roman Empire.

Regardless of this, the film is one that doesn’t specifically require historical accuracy to be entertaining. The film follows the life of Maximus Decimus Meridius (Russell Crowe), a general in the Roman Army, serving under Emperor Marcus Aurelius (Richard Harris). After a victory in Germania, the dying Marcus visits his general. Here he tells him that the fate of Rome lays in his hands—he intends to make Maximus the protector of Rome until the Senate and the people of Rome are ready to rule. This does not sit well with Marcus’s son, the aforementioned Commodus, who kills Marcus Aurelius, and then sentences Maximus to death for not swearing allegiance. He also has Maximus’s wife and son slain.

But of course Maximus escapes his execution and returns home to see his family murdered. Wounded, tired, hungry, and sick, Maximus collapses and is picked up by a slave trader and sold to Proximo (Oliver Reed), who owns a stock of gladiators. And so now the great warrior Maximus has been reduced to the lowest state of a warrior. As a gladiator, he meets two men—Juba (Djimon Hounsou) and Hagen (Ralf Moeller)—who will become his friends.

In the rest of the world, Commodus becomes emperor, his treachery suspected but unproven. Intrigue abounds, in part because Commodus displays himself as inept as a ruler. Part of this (at least for the audience) is the fact that he has obvious designs on Lucilla (Connie Nielsen), his sister, and makes no mistake of the fact that he would like her to rule beside him in every incestuous sense of the word. Lucilla, of course, is a former lover of Maximus, and there's still some evident feeling between them. There’s also quite a bit of infighting between Commodus and parts of the Senate, particularly Senator Gracchus (Derek Jacobi). As the film continues, these two spar with increasingly high stakes until Commodus is left with no alternative but to move against Gracchus. Frequently, Lucilla is used as a pawn in this, as is her son Lucius (Spencer Treat Clark).

Of course, the greatest pawn in all of this is Maximus himself, who hides his identity for the bulk of the film, and is known among the gladiators and to Proximo as the Spaniard. His own progression is shown mainly through his progression of gladiatorial battles, each one becoming more and more vicious, more and more extravagant, and up to a point, bloodier and bloodier. This, even more than the story, was the original selling point of this film to the masses. In some ways at least, we in the audience were much the same as those Roman citizens who sat in the Coliseum and watched avidly for the bloody spectacle of death.

I’m not trying to sell this short; the arena combats are fantastic, and are a selling point of the film for a better reason than the fact that they are battles. They are hyper-kinetic contests of speed and brutality, and exciting in a way that only movie battles can be exciting. Today, 12 years after the film was released, they are still one of the major selling points of the film and for the exact same reason. Put plainly, the battles kick ass.

So if the battles are the reason to watch the film, what about everything else? Tonight was the first time in probably a decade I put Gladiator in the spinner, and while I certainly remembered the film, there was quite a bit that I had forgotten. For instance, I had forgotten how much I enjoyed the brief appearance of Richard Harris in this film; he brings an air of wisdom and of serenity to this film much as he did in the first few Harry Potter films. I also had forgotten much of the character of Proximo. I remember now that he was one of my favorite parts of the film when I first saw it, and he was one of my favorite characters this time as well.

The film is a showcase for Russell Crowe, of course, and one that more than any previous turned him into the major star he is today. Certainly he had roles in films like L.A. Confidential before this one, but this was the film that turned him into a household name, and with reason. It’s a star turn like few others.

Ultimately, Gladiator is a film that plays out a great deal like Braveheart of a few years before. It’s evident early on how the film will play out and once Commodus is impressed enough to meet the “Spaniard” after a gladiatorial combat, there’s really only one way the film can end. There’s a great deal of melodrama here, a bit more difficult to recognize because of the intensity of the bloodshed, but melodrama it is.

You know what? Who cares. It’s bread and circuses, but they’re damn fine circuses.

Why to watch Gladiator: Ridley Scott, Joaquin Phoenix, and Russell Crowe at their best.
Why not to watch: The path of this story is pretty evident after 20 minutes.
Posted by SJHoneywell at 11:55 PM