I understand that there are many people who do not appreciate the particular comic style of Jacques Tati. I understand this even though I am not of that opinion. Tati’s work was groundbreaking in its own way, a unique blend of pantomime, timing, sight gags, and auditory humor. While most people in the States (and I imagine around the world with the possible exception of France) are unfamiliar with him, his influence is pretty wide-ranging. Rowan Atkinson’s Mr. Bean is a direct descendant, for instance (and for good or ill, depending on your point of view), as is much of what was done by Monty Python. 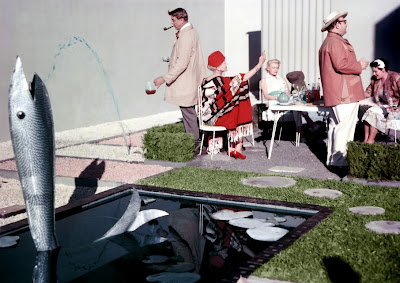 Mon Oncle (My Uncle) is the second of Tati’s films concerning the life and struggles of Monsieur Hulot (an uncredited Tati), a bumbling, but well-meaning man of no means existing in his own little world in the middle of Paris. Hulot is a makeup-less clown, a fool, and a man who never met a person, place or situation he couldn’t further destroy or screw up. In this film, Tati pits him against the perils of modern (at least for the late ‘50s) and mechanized living.

Hulot is, at least in terms of character, set against his sister (Adrienne Servantie) and her husband (Jean-Pierre Zola), the Arpels. They live in an ultra-modern house filled with every possible mechanized contraption imaginable. The house itself is virtually empty and is more of a show piece than an actual place to live. Their furniture, for instance, is completely modern—it’s sleek and attractive—but it’s also uncomfortable and virtually unusable. Every possible task has a push button—Madame Arpel, for instance, pushes a button to flip a steak on the stove, and must rush to another button to open the door when someone arrives. Their garden is similarly modern, set out in geometric shapes that contain either low hedges or identically colored patches of rock. The centerpiece is a fountain of dyed-blue water that spouts from the mouth of a fish. At least it spouts when someone arrives who Madame Arpel wishes to impress.

The Arpels have a son named Gerard (Alain Becourt), who is bored in his own house and truly comes alive only when Uncle Hulot is around. Gerard gets into minor trouble outside of the home, but inside, is incapable of expressing anything more than boredom because of the sterility of his environment and the consumer- and convenience-minded thinking of his parents. The plot, such as it is, concerns finding Hulot a job with his brother-in-law’s company and/or finding him a wife in the person of the Arpels’ next-door neighbor (Dominique Marie). And, as is the case with Tati’s character in all situations, insanity, madness, and chaos are the result of his very presence.

Mon Oncle strikes me as a natural follow-up to Monsieur Hulot’s Holiday. Tati is recognizable as the same character despite a slight change in outfit—while the pipe is still ever-present, he always wears a tan overcoat. Throughout the film, Hulot is blamed for things he did not do and gets away with many things that he did, suffering a sort of karmic justice for his bumbling errors in other places.

For all of its mania, Mon Oncle moves quite slowly. There really is not much of a plot here, and Hulot and the neighbor do not meet until well into the film. Indeed, while the film is unquestionably a comedy, there is little here that is laugh-out-loud funny. But that’s not really the intent of the film, or the intent of what Tati did. Instead, we are given a series of set pieces that indicate the absurdity of everything going on in the world of the film, and thus the world at large. Tati’s Hulot is a ridiculous character, a buffoon, but he is no more ridiculous than the rest of the characters on the screen with their dreams of a perfect modern life and pretentions of having and being more than they do and are.

So, because it is what it is, I understand when people tell me that they are turned off by Tati’s work or that they don’t find it funny. In many ways, it’s not intended to be that. It can be difficult to follow as well, since most of the dialogue is merely a murmur and what we see and the sound effects are far more important than the words being spoken. Tati worked with both sight gags and sound gags. The humor comes not from the situations per se, but from the implications of what is happening. Given a drink holder that is to be plunged into the ground, for instance, Hulot manages to stab the main water line of the fountain, and is thus relegated to keeping his foot on the new hole. When showing off her kitchen to her guests, Madame Arpel is forced to shout over the sounds of her machinery. Sure, there’s convenience and even a stark, modern beauty in the house. But at what cost? And that’s more or less the point.

It’s satire and subtle commentary on the world through an absurd lens. While individual scenes are not riotous or even memorable, what is is the overall production itself. Mon Oncle is much greater than the sum of its parts and scenes—it works to combine all of its elements into a greater picture and impression. In many ways, while we are smiling at the antics of Hulot and the Arpels, Jacques Tati is looking through the screen and laughing at us. 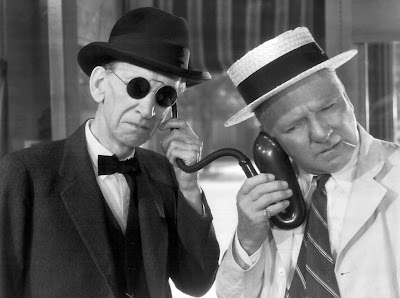 W.C. Fields was a very different comedian from Tati, in that his work was rarely silent. Additionally, he didn’t always cause the chaos around him, but suffered from other people creating that chaos. However, the results of his comedy are remarkably similar to that of Tati in many ways. While the two approached the nature of comedy from very different directions, their films work almost exactly the same way.

It’s a Gift, generally considered a high point in Fields’s career, is remarkably similar in tone to Tati’s work in that there is sort of a through line of a plot, but the plot is really secondary to everything else that is going on. This film, like many others in his career, is merely an excuse for Fields to do his routine in front of a movie audience rather than on stage. The point is not to see what happens by the end of the film, but to see what happens to Fields moment by moment and how he reacts to it.

As with many comedies, the story is ridiculously simple. Harold Bissonette (Fields) runs a small general store, has a self-centered daughter (Jean Rouverol), a noisy and annoying son (Tom Bupp), and a shrill harpy of a wife (Kathleen Howard). In other words, except for his occupation, he’s every W.C. Fields character ever. His one dream in life is to own an orange grove in California, and when his Uncle Bean dies, he gets his chance. Over the objections of his wife and daughter, Bissonette (pronounced bis-o-NAY by his social climbing wife) packs up the family and moves to the new property only to discover that it is worthless for growing oranges. However, there are developers very interested in purchasing his new property, allowing for the requisite happy ending of an early comedy.

But again, the plot really isn’t that important. While everything is essentially loosely connected to this story, the family doesn’t get in the car to move until there are about 20 minutes left, and doesn’t get to California and the bum orange grove until nearly the very end. Why? Because it’s not really about that. It’s about seeing Fields traumatized by his neighbors. The middle sequence of the film consists of Fields attempting to get a little sleep on his porch and being disturbed by a series of accidents, neighbors, passers-by, and other minor calamities. This sequences goes on for a very long time, making a substantial portion of the film, and has nothing to do with the family heading out west. It’s there so that Fields can be Fields.

The Fields persona is in full force in this film. He keeps up a nearly constant patter of dialogue, some of it remarkably funny, even now close to 80 years after the fact. His grumblings touch on everything and are liberally sprinkled with anger toward everything around him and constant apologies and explanations to his shrew of a wife. As with Tati, the film moves from set piece to set piece—the shaving sequence, the blind man in the store, the car that won’t run—and weaves back and forth around the plot without really worrying whether or not the story is advanced.

It’s a Gift is essentially pointless, but it’s also funny. It doesn’t need to be anything more than that, honestly.

Why to watch Mon Oncle: There’s a unique, absurd charm to the work of Tati.
Why not to watch: It doesn’t go anywhere.

Why to watch It’s a Gift: W.C. Fields was a unique performer.
Why not to watch: It’s silly, short, and overacted by everyone not named W.C. Fields.
Posted by SJHoneywell at 10:47 PM