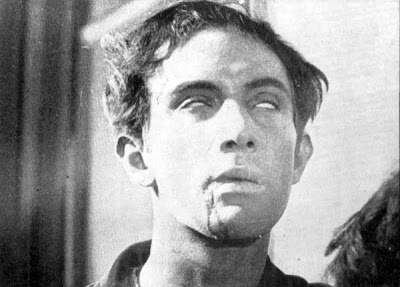 As evidenced by the current state of where I stand, I’ve made a real effort at watching the earliest films on The List, and have virtually completed the first 100 films. However, Un Chien Andalou (An Andalusian Dog) has, until tonight, remained unwatched. My brother Tom is going through much of this list on his own (I think he has the fifth edition), and when I spoke to him a couple of weeks ago, he wondered at the fact that I hadn’t bothered to get through this short little oddity yet. I confess that the reason has been fear.

I know how this film starts. It starts, notoriously, with a man slicing a razor blade across an eyeball. Now, I know this is an illusion of sorts; a cow’s eye was used for the effect. That doesn’t make it any easier for me to watch. In fact, I sat for several minutes with the film frozen just before that moment, trying to steel myself for what was to come. It’s thankfully quick, but still pretty awful, especially if you have a thing with eyes.

Un Chien Andalou is essentially plotless, a series of images that follow one after the other. A cloud slices across the moon and the razor blade slices across the eye and suddenly eight years pass. A man falls off his bicycle, then ants crawl from a hole in his hand (a reference to a French idiom for wanting to kill someone). A severed hand appears in the street, and a woman is run down while the man watches. The man makes sexual advances on the woman from the start of the movie, alternately imagining her clothed and unclothed. He then drags a pair of pianos with a dead donkey on them toward her. There are a couple of priests involved in this as well. More ants in the palm. Hands through a wall act as a doorbell, or are shaking a drink.

You know what? I don’t know. The images seem sometimes related to each other, but often are simply random and have only the meaning I think we ascribe to them. They aren’t particularly meaningful in and of themselves but are only given the meaning that we give them. That, in many ways, is the nature of surrealism, at least to my mind.

I’m not sure I want to ascribe a great deal of meaning to it, really. I know that this is considered one of the great moments of surrealist art, and there’s reason for that. But most of us, myself included, want to ascribe meaning to what we see. We quite naturally want to put a story together, or make some kind of narrative, or at least generate a meaning for what is put in front of us. And there’s no meaning here intentionally.

It makes this film difficult to judge on its face. I’ve seen it now, and I know there is value in what I have seen, but there’s no real desire in me to see it again. I mean, I like it when the man covers his mouth, then pulls his hand away and his mouth is gone. But really, what’s the point of having the woman’s armpit hair appear in its place? And do I really want to create a personal meaning for armpit hair on the face? I think not.

Why to watch Un Chien Andalou: The first instance of real surrealism in film.
Why not to watch: Sliced eyeball.
Posted by SJHoneywell at 11:20 PM