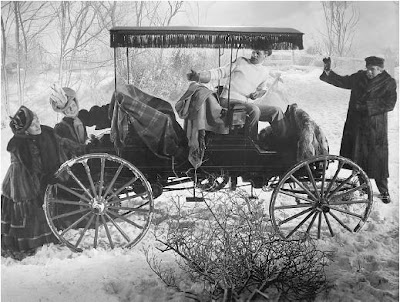 Films, particularly older films, have a tendency to deal with the problems of rich white people. I think there’s a reason for that. In many senses, when our characters are divorced from dealing with the realities of everyday life, it allows them (and thus us) to focus on whatever the main theme of the story is. The Magnificent Ambersons is a film that is entirely tied up in the money of its characters, but is not really about the money at all.

The film, as the name implies, concerns the Amberson family roughly around the turn of the last century. In their unnamed town, they are by far the leading family and live in the grandest house. The Ambersons throw actual cotillions, dress for dinner, and are every bit the aristocratic family. It makes them both admired and resented, and thus ripe for any possible hint of a scandal. Most attuned to this is the youngest of the clan, George Amberson Minafer (Tim Holt), roughly college-aged and spoiled beyond measure. We see a glimpse of his boyhood and learn that his mother Isabel (Dolores Costello) has never really disciplined him. And so George grows up doing what he wants when he wants and saying what he wants.

The film opens with the return to town of Eugene Morgan (Joseph Cotten), who has built an automobile factory on the outskirts of town. Morgan used to live in town and was one of the leading suitors for George’s mother’s hand. Now a widower, Morgan has returned with his daughter Lucy (Anne Baxter) in tow. It is evident immediately that there are sparks. George and Lucy quickly become a matched pair, and there is evidently still a good deal of attraction between Eugene Morgan and Isabel Amberson-Minafer.

All of this comes to a head when Wilbur Minafer, Isabel’s husband, dies suddenly. Suddenly, the path is open for Eugene to resume his courtship of Isabel, mourning or not. And they two are frequently spotted together, something that George is made aware of by his spinster Aunt Fanny (the underappreciated Agnes Moorehead). And this sends George off on a tear, spinning through the town to discover how much damage this “scandal” has done to the good name of his family. He refuses entry to his house to Morgan and essentially demands that his mother no longer see him. Instead, he and his mother plan a trip and leave the town. Of course, all of this has damaged George’s plans for his life with Lucy, who is still sweet and is smart enough to play dumb about exactly what George is doing, finally and flatly and refusing his declaration of love and proposal of marriage. Genuinely, this is one of the best scenes not only in the film, but of its decade. Lucy plays this throughout and at the finish as we dream of doing in the moments after we are mistreated by someone in our life.

The tragedy of The Magnificent Ambersons, of course, is that it was badly mistreated by the studio, with a third or more of its original length removed. Additionally, director Robert Wise was instructed to make these edits and tack on a false happy ending against the wishes (and without the knowledge) of Welles. The action caused a rift between the two men for years, in part because the editing destroyed the original vision of his film. But that’s very much Welles. He’s the kind of director I hate to love, but love anyway. He very much comes across as someone who knows precisely how talented he could be, and never let a moment go when he didn’t put that in front of other people. But he’s hard to dislike because he was so damnably talented. His complaining seems half like whining and half like justifiable anger at the destruction of what could have been his greatest film.

For the rest of us who aren’t Welles, the tragedy isn’t specifically that the film was edited, but that the footage was destroyed. The reason for destroying the footage was given as needing room for storage. It’s a better guess that it was destroyed to prevent Welles from reediting it. It is tragic. It’s tragic because even in this damaged version, this abridged runt of a complete film, it is an achievement.

I always liked Joseph Cotten because he’s my favorite part of Citizen Kane, but in the last two years, I’ve become a bigger and bigger fan of the man. And while Cotten is great as always, the real performance for me here is Agnes Moorehead who goes from depressed and lonely to vindictive to remorseful to insane in the course of this short film. I also like the narration of Welles over the top of the film. For whatever his personal foibles, Welles had a tremendous narrator voice.

As truncated as this film is, it’s still one of the best of its decade. It would be better in this version even more truncated without the tacked on three-minute feel-good, but it’s still very much worth your 90 minutes.

Why to watch The Magnificent Ambersons: Welles in his prime as a filmmaker.
Why not to watch: What would have made it truly great is been lost forever.
Posted by SJHoneywell at 1:35 PM