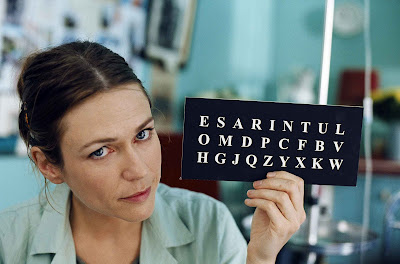 When it comes to the experiences of a film, I try very hard not to be squeamish. Blood and guts doesn’t really bother me too much, although I tend not to enjoy it if it is completely gratuitous. But there are things that I find almost too much to bear. For instance, when my wife wanted to watch Buried because of her Ryan Reynolds fetish, I had to back away. That sort of thing—physical encasement—sets me to panicking. Thus it was not without a certain amount of fear that I encountered and started watching Le Scaphandre et le Papillon (The Diving Bell and the Butterfly).

This is the relatively true story of Jean-Dominique Bauby (Mathieu Amalric), who suffered a massive stroke at 42. The stroke left him with something called “lock-in syndrome” which essentially paralyzed his entire body but left his mind entirely intact. Bauby was left able to only blink his eyes. However, even this was reduced by half—since his right eye wasn’t irrigating correctly, the doctors sewed it shut, leaving only his left eye. Slowly, he learned to communicate through a painstaking process of blinking—one blink for yes, two for no.

We soon meet his speech therapist, Henriette (Marie-Josee Croze), who develops a painstaking way for Bauby to speak. She reads off the alphabet, arranged in order of the most commonly used letters, watching for him to blink at the letter he wants. In this way, letter by letter, he can communicate with the outside world. We are also introduced to Marie (Olatz Lopez Garmendia), who tries to work with him to get him to move small muscles, hoping that he can eventually regain movement in his mouth and head.

Naturally, a great deal of the film takes place inside Bauby’s head. He remembers a great deal of his life, for instance, and much of this is shrouded in guilt at missed opportunities and the way he treated others. He never married the mother of his children (Emmanuelle Seigner), for which he constantly beats himself. A friend (Niels Arestrup), once taken hostage for years, visits him and tells him to hold on to his essential humanity. Even this brings him guilt—he never called the friend once released from bondage.

Under contract to write a book, a modern retelling of The Count of Monte Cristo from a female perspective, Bauby decides instead to dictate a book regarding his condition. His publisher contracts an assistant (Anne Consigny) to take his dictation letter by letter, and the pair get through about a page and a half per day. Of course, this is based on reality—Bauby truly did dictate a book (of the same name) this way, and lived just long enough to hear critical praise before dying of pneumonia.

A great deal of the film comes from Bauby’s perspective, including virtually all of the first third. While he cannot communicate with the outside world, he communicates with us constantly, telling us what he is thinking and how he relates to his new condition. He likens it to an old diving suit (the diving bell of the title), where he is essentially completely insulated from the outside world and has only a limited vision of what is around him. The butterfly comes not from him, but from those around him, who see the beauty of his spirit and determination that is somehow transforming and escaping from his body.

The performance from Amalric is surprising. While we see him in flashbacks and memories acting normally, interacting with his children and lovers, shaving his infirm father (Max von Sydow) who is trapped in his apartment and unable to walk down the multiple flights of stairs to the outside. In his interior life, he can walk, move, and interact. But much of the time, he is seated motionless in a chair, one eye behind a translucent lens in his glasses, the other constantly staring, his mouth dragged down by the result of the stroke.

I won’t mince words. This was a hard watch for me. The reality of this condition scares the living shit out of me, and mid-way through the film I had a pointed conversation with my wife about what I would want should this happen to me, and that’s constant drugs to keep me unconscious. But a hard watch or not, there is a surprising beauty in this film, a reality that the human spirit can be—can—be one of the most surprising and uplifting things in the world.

I did not enjoy this film, but I respect what it is. I will probably not watch it again, but I will remember it for a very long time.

Why to watch Le Scaphandre et le Papillon : Surprisingly beautiful and introspective, but of course, it had to be.
Why not to watch: If the idea of it freaks you out, it’s not an easy watch.
Posted by SJHoneywell at 11:53 PM