Film: Precious: Based on the Novel “Push” by Sapphire
Format: Streaming video from NetFlix on laptop. 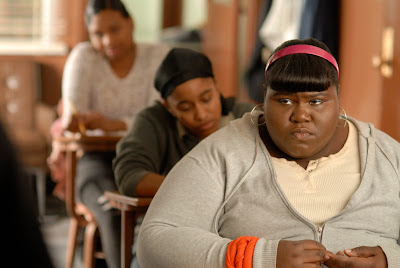 Precious, officially named Precious: Based on the Novel “Push” by Sapphire is one of those films in the Hollywood genre of “important.” It doesn’t much matter if the film is a drama, a slice-of-life, or any other potential genre out there; Precious is an important film with roots that go back through other social commentaries on the poor and disenfranchised, the troubled and troubling, and the African-American experience in the United States. It is a film that is relentless in its pursuit of a desired happy ending that simply doesn’t exist. Instead, it is misery piled upon misery, a parfait of social and familial evils served to us in a tulip glass made of guilt. It’s also really powerful and moving, but that doesn’t change the fact that it uses everything it can to manipulate us into an emotional response.

Claireece “Precious” Jones (Gabourey Sidibe in the very definition of a break-out role) is an illiterate, overweight, abused girl living in government-sponsored housing in Harlem with her abusive and cruel mother, Mary (Mo’Nique). Within the first ten minutes of the film, we learn that Precious has a vivid fantasy life, in part because she is regularly being raped by her father and is pregnant by him for the second time. Her school is a warzone where no learning happens. Her mental world in which she is famous, beautiful, rich, and loved is her only escape. These fantasies come throughout the film, and generally when her real life has become so terrible that there is nowhere else for her to go.

Precious is removed from school and, because she appears to have some talent in math, she is offered a place at an alternative school to help her get her GED. It is here that the depths of her illiteracy are discovered, and she begins slowly working on learning how to read with the only-in-a-movie-could-she-have-this-name teacher Blu Rain (Paula Patton). She finds another mother figure in social worker Mrs. Weiss (Mariah Carey—yes, that Mariah Carey), who takes an interest in her case, particularly when she discovers the source of Precious’s children. We also get a decent turn from Lenny Kravitz as a nurse in the maternity ward when Precious delivers her second child.

But, of course, the uphill struggle that Precious finds herself on will be filled with obstacles, most of them thrown in her way by her evil, sadistic mother. Eventually, Precious gains the personal strength to leave her mother’s house, and just when the sun starts to come out on this story of pain and struggle, the floor drops out in a way that I will not reveal. The film tries to end on an up note, but really, that up note would not be difficult considering the depths of the well in which this film spends the bulk of its time.

I said before that this is the definition of a break-out role for Gabourey Sidibe, and it is, but hers is not the only truly noteworthy performance. However, hers is central. It is she who spends the bulk of the time on the screen, and it is through her eyes that the story of the film takes place. Sidibe is natural on the screen, as if she is not acting. Her speech is soft at times, as if she is scared of speaking to call too much attention to herself, and it is entirely believable. It’s worth noting additionally that a part of me wants to see more roles similar to this one available. The Hollywood model for women’s roles is for all women to be achingly gorgeous and a size 0, to be unobtainably beautiful. Sidibe is real, and while the world of this film is dismal and horrible and awful, I can only hope that she continues to find powerful roles for herself and continues to create a presence for women who are not the movie icon ideal.

The same can be said for, believe it or not, Mariah Carey here. Up to this point in my life, the single value I saw in Mariah Carey’s entire career was being used essentially as a sound effect/siren in the Emergency Broadcast Network’s video compilation/song “Get Down Get Down.” Beyond that, she had as much use for me as a kickstand on a blender, but I have to respect her performance here. She appears almost without cosmetics and sounds like she chain smoked a carton of Luckies before her scenes. She makes it work. Surprise, surprise.

The true performance here, though, comes from Mo’Nique, who has made most of her living in the public eye as a comedienne. Here, she plays a villain on par with virtually any over-the-top movie creep ever conceived, and creates something so vile and yet so completely real. It is the sort of thing that makes me wonder where this came from, and why she never did it before. She is an awful creature in this role, hateful and cruel and ugly, and the performance is one of the most riveting things I have ever seen. Mo’Nique in this film is a train wreck, and I mean that as a compliment. She is awful and terrible, and absolutely compelling. It is a thing of awe and wonder.

Of course, I have a couple of complaints. First, I’d have loved to see the same sort of reality in the character of Ms. Rain. Paula Patton is the sort of gorgeous that doesn’t teach in New York City schools. She’s good in the role, but too beautiful to be believable in it—the sort of anti-cosmetic magic done on Carey would have served her well here, because she’d not only have the acting chops for the part, she’d look the part.

Additionally, the film is the sort of misery buffet that I tend to avoid. All movies have conflict and problems, and while there are plenty of movies that pile trauma on trauma, few do it with the steam shovel that Precious uses. It’s hard to think of five consecutive minutes in this film that don’t involve some sort of indignity, pain, or degredation. Yes, I know there are lives like this, and yes, I see the importance of the story, but at some point, I just want a little light.

I also object to the formal name of the film. I understand why it happened—there was another movie out around the same time called Push, so there was a need to differentiate. But it would have been fine to just call the movie Precious without the unnecessary “look at me!” subtitle. In fact, it got so ridiculous, that reprint copies of the book were called “Precious: Based on the Novel ‘Push’ by Sapphire” despite the fact that the reprint copies were indeed the novel “Push” by Sapphire. Oh, Nick Jobe, where is your meta-commentary when I need it?

EDIT: Squish Lessard at The Film Vituperatum, in his review of The Color Purple, which has similar themes, called this film Promise: The stupidly long title based on a book with a different name and here's the author's name in the title. I told him I'd steal that line someday, but at least give him credit. It reminds me of my computer gaming days. When Trilobyte released the game "The 11th Hour," it was the sequel to their enormously popular "The 7th Guest." We knew that because the official title of the game was "The 11th Hour: The Sequel to The 7th Guest." It makes my brain go all stabby. The fact that this game was the death knell for Trilobyte? Draw your own conclusions.

Why to watch Precious: There are lives like this and most of us don’t know it.
Why not to watch: The self-aggrandizing full title is mind-blowingly annoying.
Posted by SJHoneywell at 11:10 PM