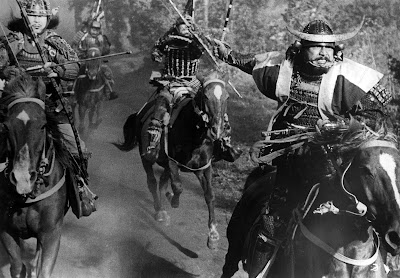 I’ve reviewed a few Kurosawa films for this blog before, and I’ve liked all of them that I’ve seen. I was pretty gushing about Rashomon and Ikiru, for instance, and with reason. They’re great films. I have a tendency to bring up Kumonosu-Jo (Throne of Blood, although the name translates more accurately to “Spider Web Castle”) when Kurosawa comes up in conversation. There’s a reason for this. I think it’s his best film. I knew going into this that I really liked this film a lot, but I’d forgotten exactly why, and exactly how damn much I really like this film.

To wrap this film up in a nutshell, this is Kurosawa’s take on Shakespeare’s Macbeth. Pretty much anything that happens in Macbeth happens here, with the main difference being that it takes place in feudal Japan, which means there’s a ton of samurai running around. Macbeth is already really bloody, and when you add in a bunch of samurai it’s only going to get bloodier (and thus far more awesome). It’s possible that you are not familiar with Macbeth. If that’s the case, first, shame on you. Go read it. Second, I’ll give you a quick-and-dirty on the story as told by Kurosawa.

We open with a feudal lord being besieged by his enemies. The tides of battle do not favor him and his various fortresses are being assaulted. However, suddenly, hope dawns. Miki (Minoru Chiaki), the commander of the second fortress, is fighting back. Better, Washizu (legendary actor Toshiro Mifune), commander of the first fortress is routing the enemy. Victory comes in the hands of these two men, and for their valor, they are summoned to the notorious Spider Web Castle. It is called this because it is in the heart of Spider Web Forest, so named because of its twisting, complicated paths that are a significant part of the castle’s defenses.

Washizu and Miki get lost in the forest and come across an evil spirit spinning thread. He tells them that their fate is that Washizu will be named commander of the garrison—a huge honor—and that Miki will be promoted to commander of the first fortress. Additionally, he tells them that Washizu will someday command Spider Web Castle itself, and that Miki’s son is destined to rule after. They aren’t sure that they can believe these tidings, but when they do finally reach the castle, they receive the promotions that were foretold.

And now, as the saying goes, shit gets real. Washizu’s wife, Asaji (Isuzu Yamada), in a particularly passive-aggressive manner, tells her husband that if he is to command Spider Web Castle, the best way is to kill the great lord. After all, the great lord will certainly kill him if he discovers Washizu’s ambition to rule. And, she questions how much Miki can be trusted, since he has a share in this destiny as well. Washizu doesn’t want to listen, but fate intervenes. The great lord comes to the garrison to stay, as he is planning an offensive against the enemy who attacked at the start of the film. For this attack, he gives Washizu the honor of leading the charge, with Miki to command Spider Web Castle itself.

Sounds like an honor, but it’s immediately twisted by Asaji, who says that this is merely a ruse. Put Washizu at the head of the attack, and he is certain to be killed, allowing Miki to usurp the position. Slowly, a plot is hatched, and Washizu kills the great lord, laying the blame at the feet of another samurai leader. It doesn’t really fool anybody, but Miki seems to go along with this in return for having his son named as heir.

And then the wheels come off. Asaji slowly starts to go insane and Washizu begins to become overwhelmed with paranoia and fear. He begins seeing ghosts, and has Miki assassinated to prevent further betrayal. More and more, he confines himself to the castle where he rules, and more and more on the outside, his enemies start to confer with each other and plan to remove Washizu, causing the new great lord to seek the counsel of the forest spirit again. Any more than this would go into spoiler territory, and it’s not worth the risk. Really, if you don’t know what happens in Macbeth, you should find out for yourself, not by having me spit it out for you.

There is very much to love in this film. Mifune, of course, is terrific as always. He goes through a number of mood changes, and he plays them all believably. Particularly at the end, when his madness is growing, he is especially effective. It helps greatly that Mifune looks the part of a samurai lord; he’s believable on its face. He expresses equal parts fear, rage, and insanity in the second half of the film, frequently all at once, and most effectively in the banquet scene. Here, he encounters Miki’s ghost. This is a wonderfully filmed sequence, because it clearly shows us that only Washizu sees the ghost. It can thus be interpreted any number of ways—his guilt, perhaps, or maybe he truly is seeing the ghost because he ordered the assassination.

The best part of the film, aside from the impressive hail of arrows at the end, though, is Asaji. She is almost unique in film. With her heavy kimono and eyebrows painted high on her forehead, there is a real sense that she is very much an evil spirit, too. She is always calm and calculating (except at the end), offering her terrible advice with a sort of studied practice. She moves slowly and deliberately for much of the film, a fact that only adds to the dream-like nature of her performance. More than that, she’s so plainly wicked that it’s almost impossible not to respect her based on that alone.

If I had two wishes regarding this film, they’d be easy to make. First, while I love the crisp black-and-white of this film, I’d also love to see it in color. There’s a unique pageantry to the samurai costumes and pennants, and to have those in color would be great. Second, early in the film, Miki and Washizu are lost in the forest. This sequence, while only a couple of minutes long, gets tedious. The two ride up in a fog, stop their horses, then ride off in a different direction. Then again. Then again. Then again. I understand why this happens—since it comes after the encounter with the spirit, there is a sense of the pair needing to get back to the real world. It also emphasizes the complexity of the forest itself. But a minute could go from this without much lost.

But really, that’s it. Everything else here borders on perfection.

Why to watch Kumonosu Jo: Because it represents a high point not just in Japanese cinema, but in world cinema.
Why not to watch: The fog scene gets old very quickly.
Posted by SJHoneywell at 11:54 PM